A “Boston Strong” Creator Is Running the Marathon This Year

Christopher Dobens is running for the Brigham and Women's Stepping Strong team. 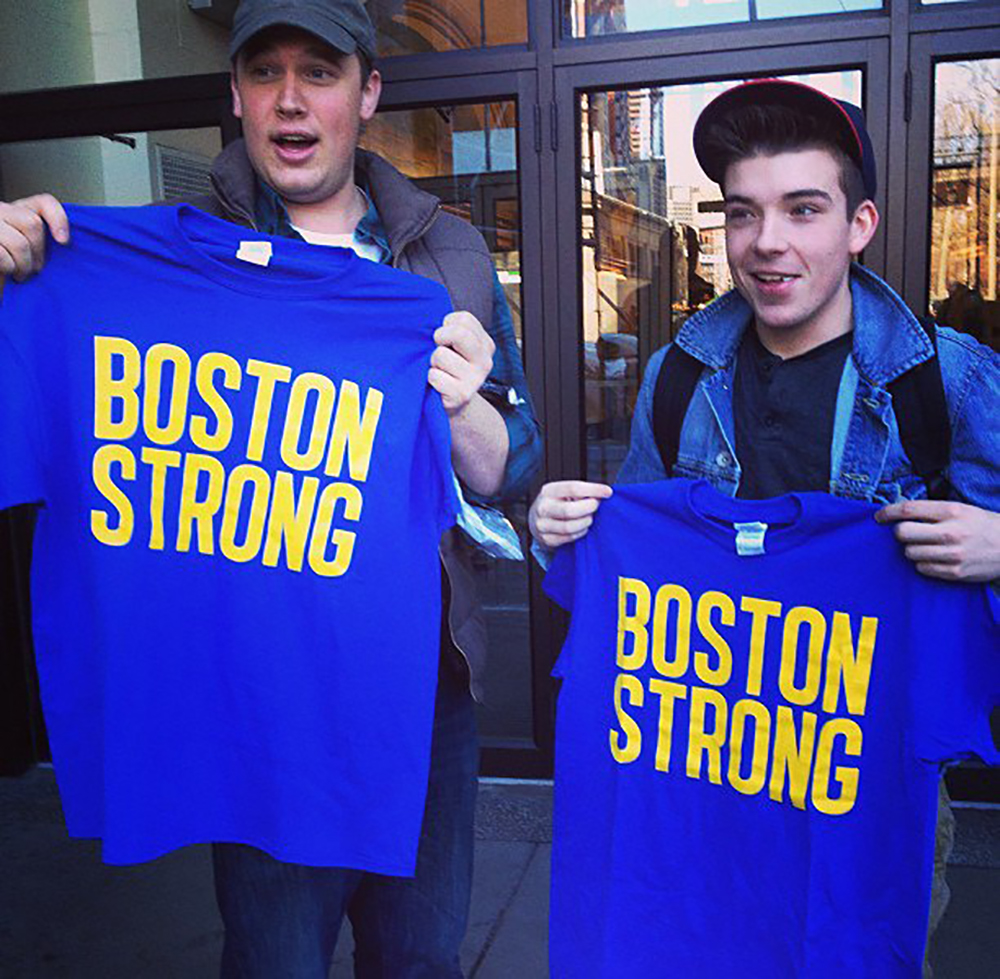 Christopher Dobens, right, with the t-shirt he designed/Photo provided

You may not know Christopher Dobens by name, but there’s a good chance his handiwork hangs in your closet.

Hours after the 2013 Boston Marathon bombings, Dobens and Nicholas Reynolds, then students at Emerson College, designed a simple t-shirt. That basic shirt—blue body, gold letters spelling out “Boston Strong”—would soon sweep the city, selling thousands of units, raising more than $1 million for the One Fund, and forever cementing “Boston Strong” in the local lexicon.

Four years later, Dobens is again using the Boston Marathon to do good—this time, as a runner.

“I have always wanted to run the race for charity, ever since ‘Boston Strong’ was created,” Dobens says. “I just had a feeling that this year was a good year for me to finally achieve that goal.”

Dobens is running for Brigham and Women’s Hospital’s Gillian Reny Stepping Strong Center for Trauma Innovation, named for bombing survivor Gillian Reny. It was important to Dobens, he says, to run for a cause that supports trauma care and research.

“There are a lot of things that affected me from [the 2013] marathon, and a lot of people that I care about were affected by that marathon,” he says. “I felt that running was one way to heal from it, and one way to move forward from those events.”

While running is an entirely new challenge for Dobens—“It is crazy, the amount of commitment you have to have to do this race,” he marvels—registering for the marathon has also brought him back to basics. To supplement his fundraising efforts, Dobens created a new t-shirt, this one a hybrid of “Boston Strong” and “Stepping Strong.” Proceeds from the original design, which is still on sale, will also benefit Stepping Strong.

And though a sprained ankle will likely keep Dobens from achieving his original time goals, he says he’s looking forward to finally experiencing Marathon Monday on the course, as a participant.

“I’ve seen the strength of the people who have run. I’ve been at the finish line multiple times. You can just see this desire in people’s eyes to get to the finish line,” he says. “That’s a personal journey, and I fell in love with that concept.”

Donate to Dobens and the Stepping Strong Fund here.