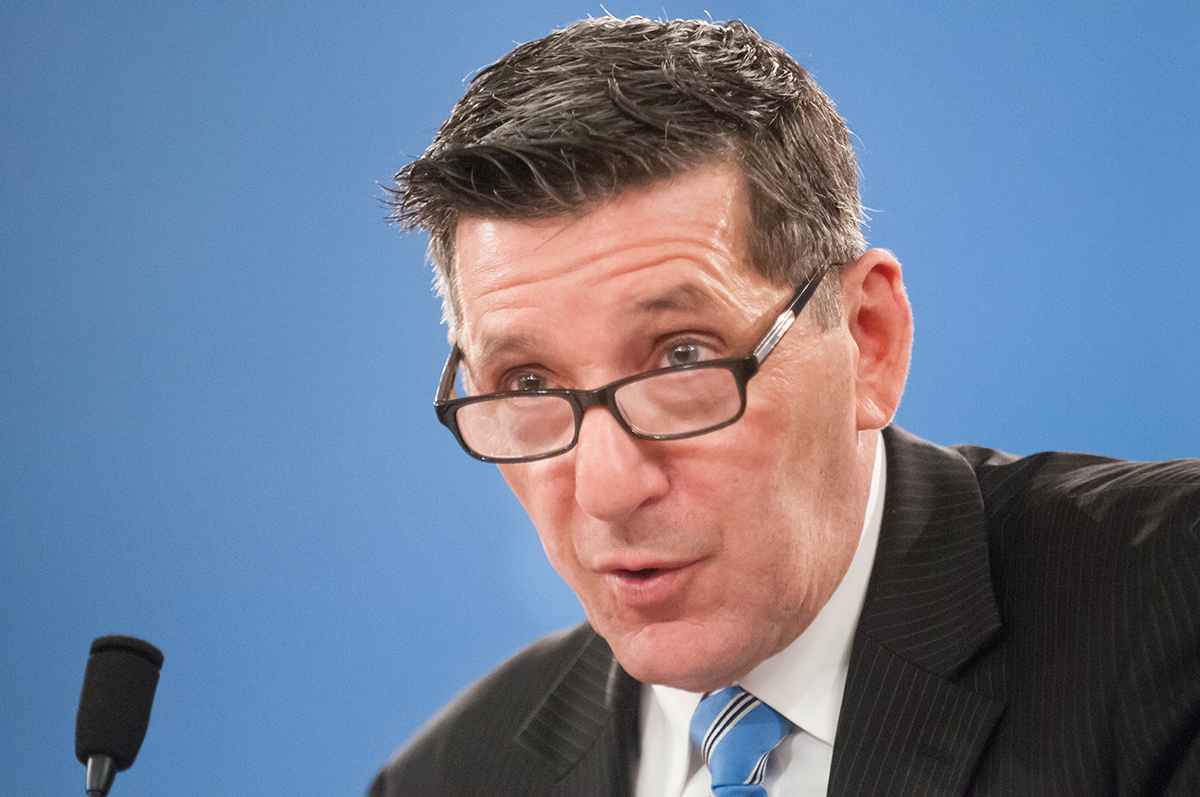 After two years at the helm of the Office of National Drug Control Policy (ONDCP), Michael Botticelli has found both a homecoming and a new beginning in Massachusetts.

Botticelli spent 18 years at the Massachusetts Department of Public Health (DPH) before becoming President Obama’s drug czar in 2014, a title he held until the end of Obama’s term. On Monday, he returned to the Commonwealth for a new gig at Boston Medical Center (BMC)—and a big one, at that.

Botticelli is the inaugural executive director of BMC’s Grayken Center for Addiction Medicine, which was established thanks to a $25 million gift—the largest in the hospital’s history—from billionaire John Grayken. The center will build on BMC’s decades of work surrounding addiction and drug use, and help to cement the hospital’s role as a major player in the fight against opioid abuse.

Here, Botticelli discusses his new role, extreme proposed cuts to his old department, and his own experience with substance abuse.

How will the Grayken Center tackle the opioid crisis under your leadership?

[By] continuing to innovate around treatment and recovery. That work has been happening here already, whether that’s the integration of addiction treatment into primary care settings, how we facilitate people’s access to treatment, when they intersect with our emergency department or primary care settings. Outreach to people who are already using, particularly around overdose prevention and infectious disease prevention, is an area where we obviously have to do better.

The opioid epidemic has pointed out some glaring deficiencies in our medical education, not only around safer opioid prescribing, but also around issues of addiction in general. We want, as an institution, to make sure that we’re doing everything in our power not to compound the problem, and ensure that we are helping.

Will the political climate have an impact on those efforts?

Significant issues [such as the AHCA] that have happened in the Trump administration I think give us significant concern in terms of whether or not this administration and this Congress is serious about the opioid epidemic. Quite honestly, [these actions are] in diametric opposition to what the president and other people have articulated as a priority. Then-candidate Trump on the campaign trail, and as president, and Secretary [Tom] Price, talk about the fact that treatment is one of the main priorities of this administration, but I don’t know how they can say that in the face of the dramatic impact that changes to the Affordable Care Act will mean, particularly for people with addiction.

What about the proposed 95 percent budget cut to the ONDCP?

I always referred to ONDCP as the conductor of the orchestra. They are the ones that are not only leading the federal response to this, but ensuring that those actions are coordinated, that those strategies are grounded in science and evidence. I worry that without an office, that there will be less focus on issues of drug use and its consequences, that any efforts can be haphazard and uncoordinated, and quite honestly a waste of taxpayers’ money.

What would these cuts mean for community efforts, in Massachusetts and elsewhere?

ONDCP also administers two grant programs. One is the drug-free community program. It funds close to 700 communities nationwide, and it understands that prevention is one of the key strategies that we need to implement. It also understands that all prevention is local, and that you really need all of the key community stakeholders coming together. I know Barnstable County has a program that has done incredible work in terms of reducing prescription drug misuse. Without these resources, we’re going to have a significant deficit in community-based prevention programs.

The second grant program that [ONDCP] supports is called the High-Intensity Drug Trafficking Area [program]. It’s a county-by-county designation of…high drug trafficking areas, and it gives support to both state and local law enforcement to ensure that we are diminishing the supply of drugs and the criminal organizations behind them to reduce the availability of drugs in the community. I can’t think of a more pressing time for that work to happen.

So what’s the path forward?

I don’t know. I fear that there won’t be the resources to be able to do it. The state has finite resources, and I do believe the federal government has a huge responsibility to play in terms of supporting community-based prevention efforts. I don’t see other pots of money being able to support the loss of the prevention problems.

DPH data suggests overdose deaths are slowing. Are you encouraged by that?

I’m cautiously optimistic that some of the things that are happening here and nationally are beginning to take hold. That said, the level of overdose deaths not only here in Massachusetts, but nationally, compels us to continue to make progress on this. This is not a time to celebrate. It’s a time where we need to make sure that not only are we continuing our efforts, but that we accelerate progress.

How does stigma factor in to the problem?

Stigma plays a role not only at the individual level, but really at the policy and practice level. We know that stigma play a huge role in shaping policymakers’ experience about whether or not people deserve treatment, whether or not they are entitled to housing or employment opportunities, shaping our overall response to this issue as a health issue versus a criminal justice issue or a moral failing. Stigma has an impact beyond individuals’ decisions about whether or not to seek care.

Does your own history with alcohol abuse make you better equipped to handle that?

It doesn’t sound very humble if I say yes to that question, but it does! When I knew that I needed help for my alcohol addiction, I distinctly remember thinking that if I asked for help, or if I said that I had a problem, people would think I was stupid, or weak-willed, or somehow flawed. That often happens with people who begin to come to an understanding that they need help—they often delay seeking care, or don’t seek care. During the opioid epidemic, that can often mean overdose.