The Tufts Nurses Strike Is Over, After a Tumultuous Weekend
Subscribe
Follow
I'm a scraper
This search result is here to prevent scraping 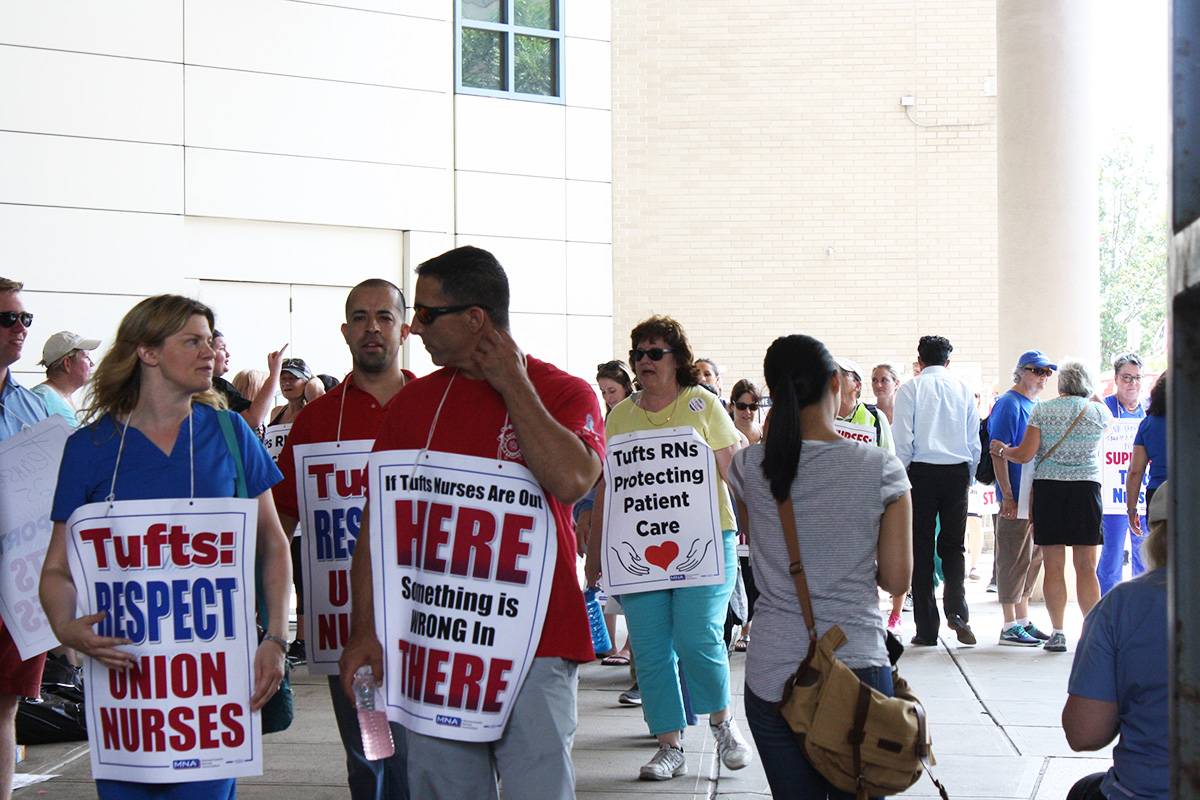 The road back to 800 Washington Street, however, was not smooth. Tensions escalated over the weekend, digging up allegations of inadequate patient care and violence.

Four formal complaints of sub-standard care were submitted to the Massachusetts Department of Health (DPH), according to the Boston Globe. According to the reports, patients’ medication schedules were thrown off, temporary replacement nurses were unable to work certain equipment, and a patient’s heart abnormality went unnoticed for hours.

DPH will conduct its own investigation, but Tufts officials said Friday the incidents were investigated internally and found to be “not factual.”

Nurses on the picket line Friday disagreed. Anna Tsareva, a critical care transport nurse who worked through the labor stoppage, said conditions inside were “horrible. It’s been pure chaos. These nurses that came in don’t have common sense. They don’t know how to do basic nursing skills like vital signs, turning off monitors, fixing IV pumps.”

Despite such accounts, Tufts officials maintained that care was up to standards throughout the disruption. “It’s going remarkably well,’’ Chief Nursing Officer Terry Hudson-Jinks told reporters on Friday. “We took time to select the nurses we needed and we were very picky.’’

Care wasn’t the only point of contention during the lockout. Tufts officials said Sunday that demonstrations turned violent and threatening toward replacement nurses.

“At a couple of the hotels where the replacement nurses had been staying, there were protesters shouting profanities, pounding on the buses, throwing coffee, and really trying to intimidate the nurses within the buses that we count on,” Hudson-Jinks said. “Thankfully, all those nurses did arrive here in time to care for our patients.”

State Police representatives, however, said that while protesters were asked to leave the grounds of a hotel near Logan Airport, no violence occurred. Hotel management asked that protesters be removed around 5:45 a.m. on Sunday, a request that officers carried out due to improper permitting. But Dave Procopio, communications director for the police, said protesters were cooperative, and that the incident never turned violent.

Union spokeswoman Jennifer Johnson said the offending protesters were not part of the Massachusetts Nurses Association (MNA), and that the group does not condone violence. “The MNA and its elected leaders were not aware of this incident, which involved members of outside organizations, until it was brought to our attention this morning by local media,” she said in a statement. “In being made aware of this situation, we want to express that the MNA does not advocate the use of violence.”

Despite the turbulent weekend, nurses said they were looking forward to returning to work. Liz Manning, a registered medical-surgical nurse who was on strike, said Friday that nurses will be ready to return to patient bedsides, contract disputes aside.

“The tension will be there, but we are professionals,” she said. “We will go in there and clean up the mess. Every patient will be checked from head to toe to make sure they get the proper nursing care.”