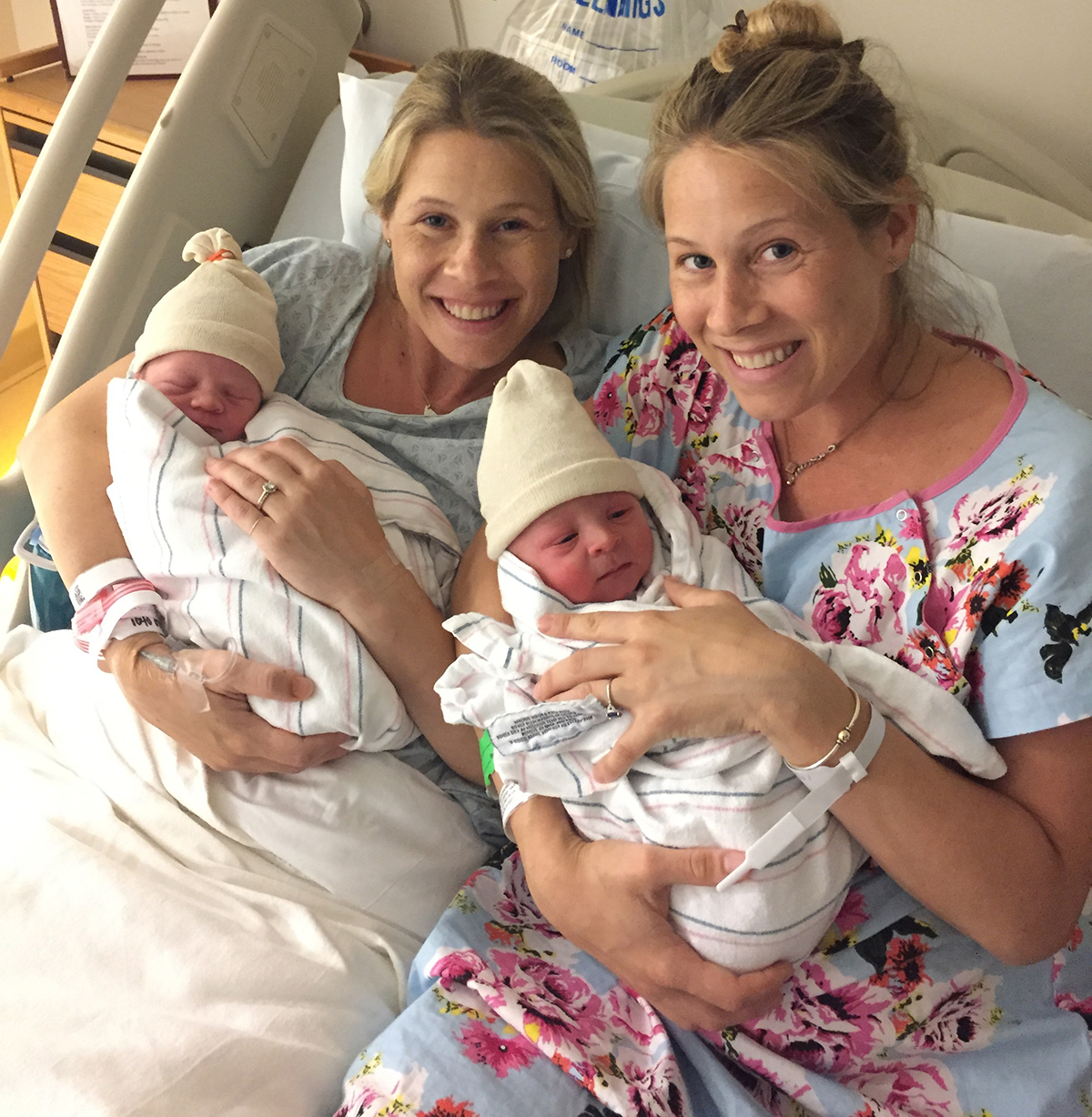 Pistone, left, with Andi, and McGeoch, right, with William/Photo provided

It started as a joke.

When 34-year-old identical twins Beccy Pistone and Rachael McGeoch found themselves pregnant at the same time, they’d often laugh about the possibility of delivering on the same day. “The whole time we were pregnant we did keep saying, ‘Oh, we’re going to have them the same day at the same time,’ but we knew that was very unlikely,” Pistone remembers.

Unlikely, but not impossible. Last month, the twins gave birth within hours of one another, both at Cambridge’s Mount Auburn Hospital—and the series of events that led to the double delivery borders on unbelievable. Stay with us here.

Last February, Pistone began thinking about having a baby. Frustrated with how long it was taking to conceive, she called her twin earlier this year and urged her to start trying—both so that McGeoch could get a jumpstart on the potentially long and difficult process, and so that their babies could be close in age. McGeoch got pregnant within three weeks.

“We were both kind of like, ‘What the heck, this is not fair,'” Pistone says. “I had already been trying, and she hadn’t wrapped her head around it yet.”

McGeoch urged her sister to take a pregnancy test, just in case she happened to be pregnant, too. Neither anticipated a positive result—but that’s exactly what they got. Suddenly and surprisingly, both twins were expecting.

Once they got the news, they toyed with delivering at the same hospital, but decided against it. McGeoch, whose due date was two weeks earlier than her sister’s, chose Mount Auburn, which is close to her Charlestown home; Pistone, meanwhile, picked a hospital near her home in Brewster.

But then McGeoch’s August 1 due date came and went. McGeoch was eventually induced on Pistone’s August 13 due date, but even the induction went slowly. Knowing full well that she might go into labor herself, Pistone eventually drove up to Mount Auburn to be with her sister and help kickstart the birth. (Mount Auburn confirmed that she would be admitted should she go into labor, too.) Having both twins in one place caused quite a bit of confusion among hospital staff. “I would be walking down the hallway and people would be like, ‘Wait, I thought you were in the delivery room?'” Pistone laughs. “It was a riot.”

The gamble paid off. With Pistone in the hospital and in the early stages of labor herself, McGeoch finally gave birth to her son William at 10:41 p.m. on August 15.

“I was in the room right next to her, and I was in the bathroom with my ear pressed to the wall,” Pistone says. “We were listening to hear the baby crying. When he did, my mom and I were banging on the wall and cheering.”

Pistone quickly followed in her sister’s footsteps. Just 20 hours later, at 6:54 p.m. on August 16, she welcomed her daughter Andi.

Though the sisters—both of whom, for the record, have partners named William—tried to give birth on the same date, they say they don’t mind their kids having separate birthdays. “I’m kind of glad, because now they can each have their own day,” McGeoch says.

And regardless of their birthdays, McGeoch says the important thing is that William and Andi will grow up together—and because identical twins have the same DNA, she points out that they’re really more like half siblings than cousins.

“We’ve always, our whole lives, said that we wanted to have twins,” McGeoch says. “We didn’t have twins, but we did have kids that are going to grow up really, really close. It’s nice to have someone that you can go through life experiences with.”