This Test Can Diagnose Zika in Less Than 20 Minutes

The paper-based test, out of MIT, can differentiate between Zika and Dengue. 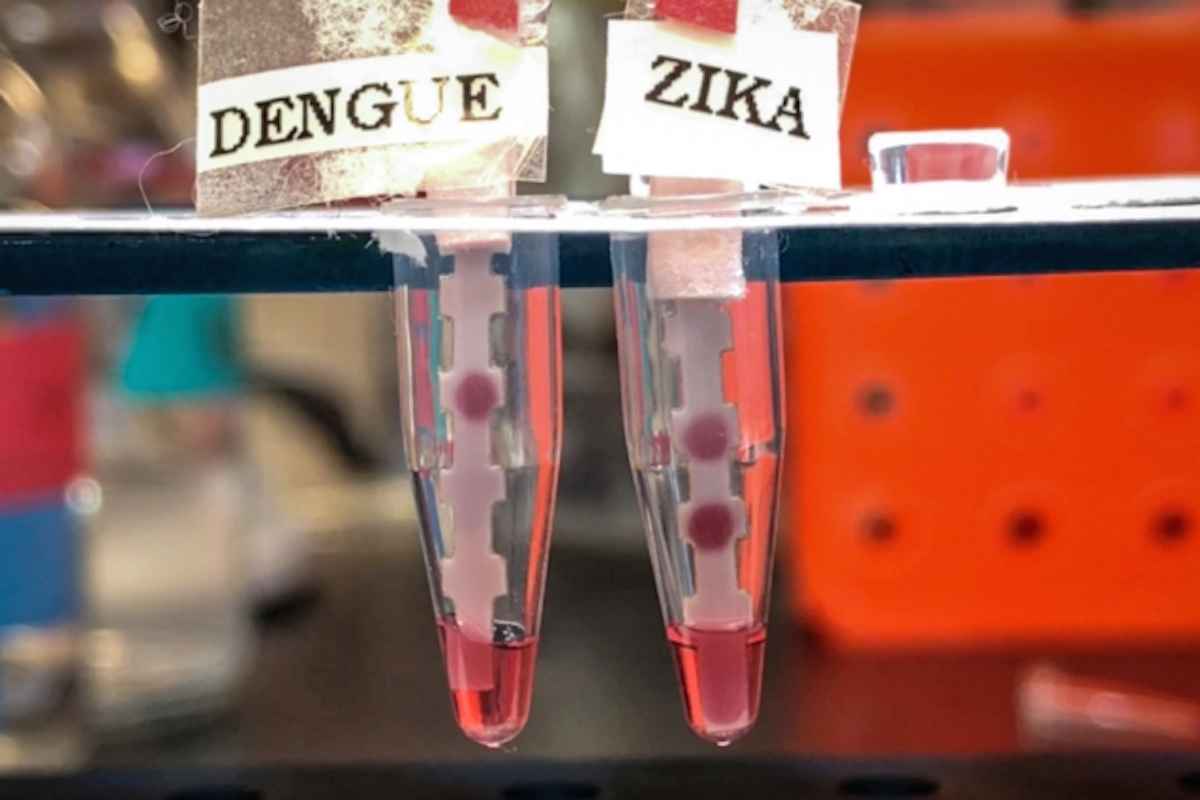 With a new paper-based test, doctors may be able to diagnose Zika within 20 minutes.

The test, born in an MIT lab, could offer a simple, cheap, and portable diagnostic option for health workers in countries where the Zika virus is still prevalent. Crucially, it does not cross-react with Dengue virus, another mosquito-borne illness that often leads to false positives in existing Zika tests.

“It’s important to have a single test that can differentiate between the four serotypes of Dengue and Zika, because they co-circulate. They’re spread by the same mosquito,” co-senior author Kimberly Hamad-Schifferli explains in a statement.

Hamad-Schifferli is an associate professor of engineering at UMass Boston and a visiting scientist in MIT’s Department of Mechanical Engineering. The study was published Wednesday in Science Translational Medicine.

To create a precise diagnostic, scientists needed to determine which antibodies would interact with a strain of the viral protein NS1 that’s produced exclusively by the Zika virus, as opposed to strains associated with the Dengue virus.

Irene Bosch, a research scientist at MIT’s Institute for Medical Engineering and Science and an author of the paper, says that tests on mice allowed the researchers to identify pairs of antibodies that reacted only with one version of NS1. The team confirmed its result by traveling to Mexico, Colombia, India, and Brazil to use the method on samples collected from human patients.

“We knew by informatics analysis that if we looked enough, and we teased out the repertoire of the B cells of these animals, we would eventually find those antibodies,” Bosch says in the statement. “We were able to tease out the very few antibodies within the repertoire that would give you uniqueness in the detection.”

Thanks to their discovery, it’s now possible to test for Zika, as well as all four strains of Dengue, with separate strips of paper. The next step is to create a version that would test for all five at once.

“When we have traveled to the places where these viruses are problems, the people there unanimously say that they need more surveillance. They need to know which viruses are circulating in their environments,” explains Lee Gehrke, a professor at MIT’s Institute for Medical Engineering and Science and a senior author of the study.

Residents back in New England could benefit from the research, too. The team from MIT is also working on a diagnostic for the tick-borne Powassan virus, which is mainly found in the northeastern United States and the Great Lakes region and causes a severe form of encephalitis.