We Tried It: Hypnoacupuncture at Healing Point Therapeutics

Can hypnosis and dozens of tiny needles cure an irritating ailment? Writer Madeline Bilis puts a unique holistic treatment to the test. 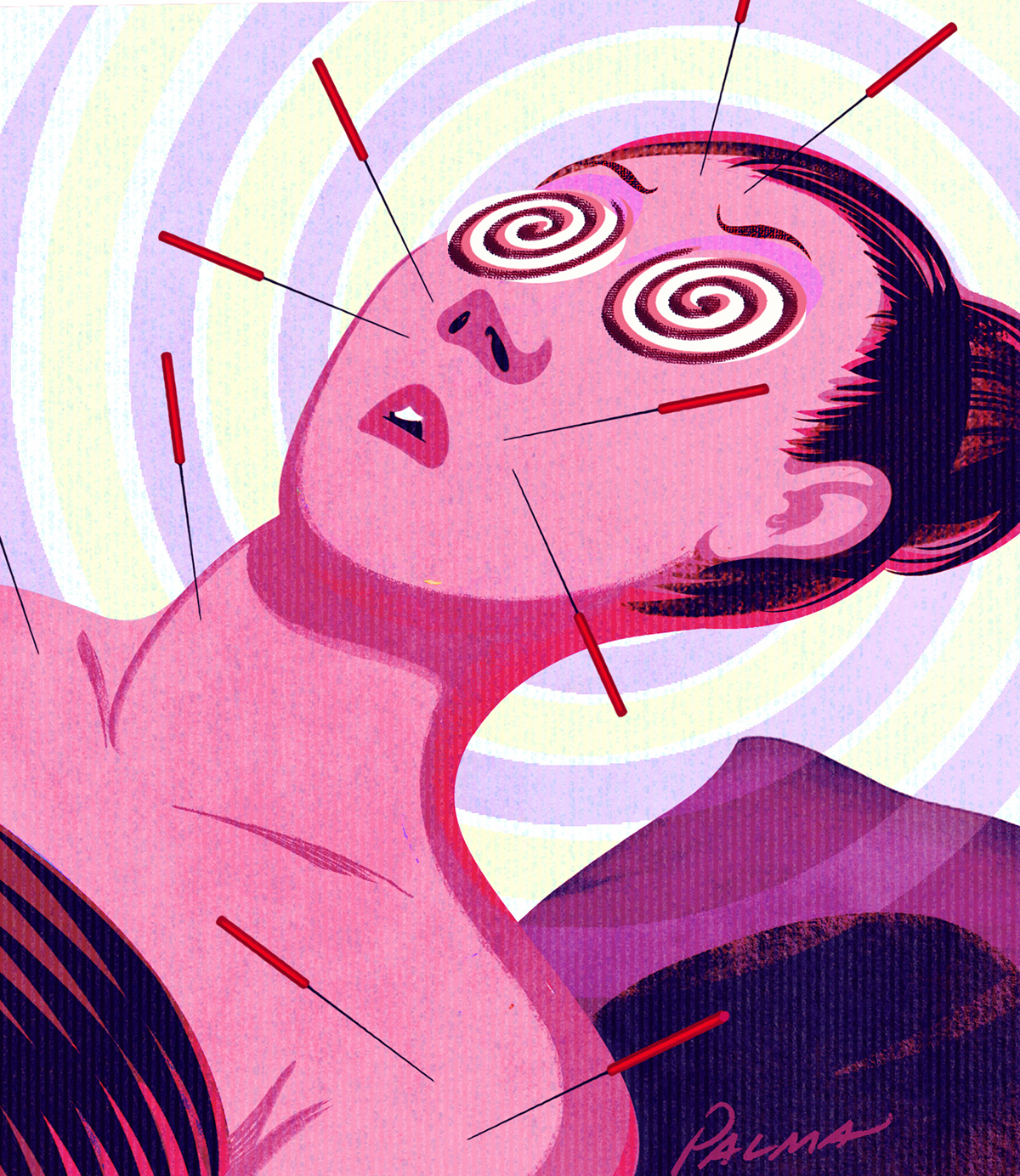 Confession: A bag of potato chips has the power to send me plunging into madness.

I grind my teeth at the sound of someone ripping into the plastic package. By the innocent snacker’s first crunch, I’m consumed by full-blown rage.

I realize, of course, that this is abnormal. I suffer from a not-yet-clinically recognized disorder called misophonia, or the hatred of specific sounds, but some people think I’m just being overly sensitive. I promise it’s real, though—a recent study proved that sufferers of misophonia experience a change in brain activity upon hearing trigger sounds. So when I learned a holistic healer in Natick might be able to erase my noise-activated wrath, my curiosity was piqued.

Five years ago, acupuncturist and licensed hypnotist Marisa Fanelli devised a therapy called hypnoacupuncture—the combination of hypnosis and acupuncture, or what she calls “the perfect pairing of magic and science.” While she recognizes she’s probably not the first person to merge the treatments, she has yet to find many others like her. Fanelli says her idea has helped cure anxiety, depression, insomnia, and even warts.

A little-practiced procedure involving needles and my subconscious? Sure, sign me up.

Sitting with Fanelli at Healing Point Therapeutics, tucked away inside an office park, she explained that acupuncture “helps people to go into the hypnotic state more quickly and more deeply.” I wouldn’t be cured after one session, she told me, but I could expect some relief. And yet when the first of 21 hair-thin needles poked into my left forearm, I panicked. How is this relaxing again? I thought. By the time she was finished, though, I’d stopped feeling them altogether—and that’s when the mental muscle-flexing began.

Hidden behind an opaque screen, Fanelli instructed me to relax my body while envisioning a sandy beach. Then I counted backward from 100. At that point, she told me some clients’ mouths dry out. (Mine did.) Their eyelids start to twitch. (Mine were.) They feel heavy, like they’re sinking into the table. (I was.) Or they feel light, like they’re floating above the table. All of a sudden, I felt like I was floating above the table. This is how you know you’ve entered a hypnotic state, Fanelli said.

Next, I pictured myself sitting in the grass, admiring a beautiful orange lily. I’m supposed to remember this orange lily—and how relaxed I felt while looking at it—each time I hear trigger noises such as chewing or breathing. Fanelli repeated this instruction three times. Then she counted backward from five and told me to open my eyes. I was back.

So did hypnoacupuncture cure my phobia once and for all? For about two days after my appointment, it felt like the volume had been turned down on the repetitive noises I hated so much—even the sound of someone chomping on Doritos on the T (cue the orange lily!). Maybe it was from deep relaxation, or maybe hypnoacupuncture is what will save me: I’ll have to go back for round two to find out.