Do You Believe in Miracles?

These Boston doctors do. From creating a cancer vaccine to stopping the spread of AIDS, they’re on a mission to save mankind—one medical moon shot at a time. 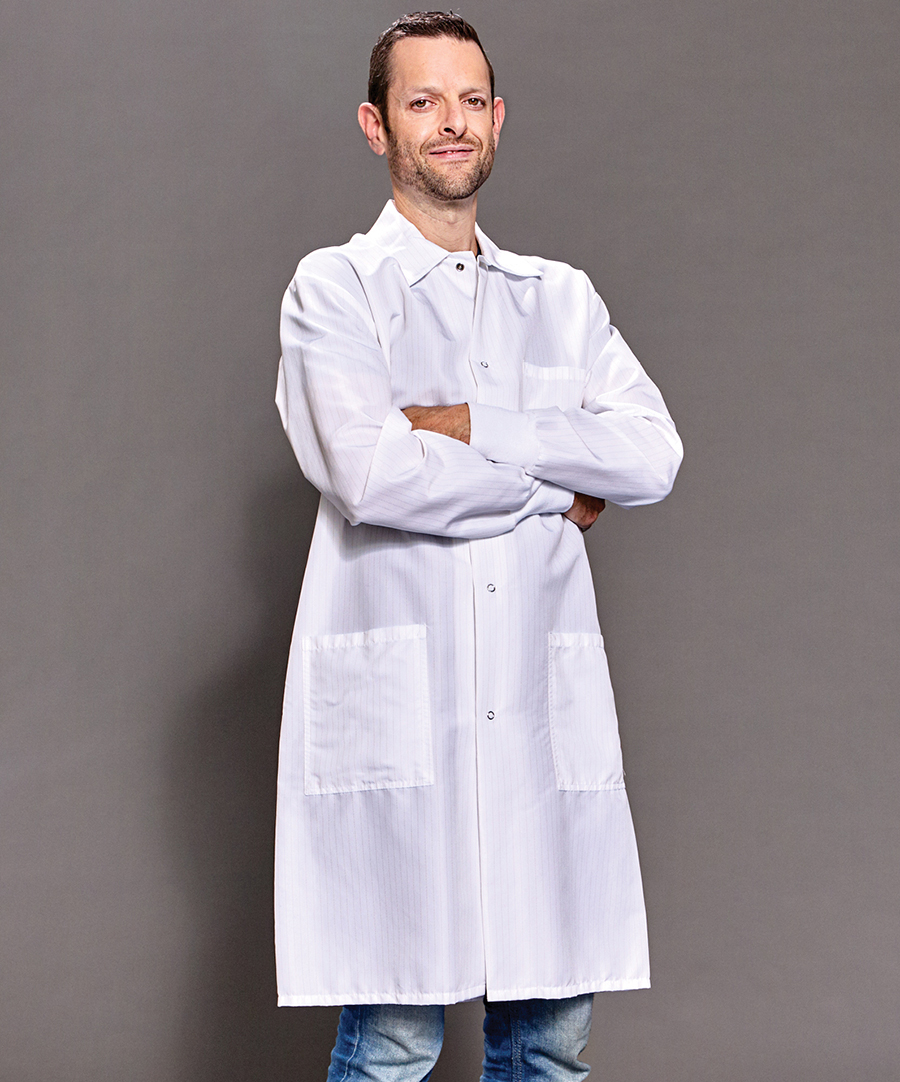 A Hero for Your Ears

Your environment is full of noise: beautiful music, stray chatter on the T. But none of those sounds means anything without the aid of your 20,000 or so inner-ear hair cells, which translate them into something the brain can understand. That’s why, when those hair cells are killed off by aging, antibiotics, or loud noises, you’re left with hearing loss. And that’s where Jeff Karp comes in.

Frustrated with cumbersome hearing aids, Karp decided to build a better mousetrap. By kick-starting the activity of progenitor cells—a stem cell descendant found inside the ear—with drugs, the Brigham and Women’s biomedical engineer was able to grow new hair cells in human tissue testing, potentially reversing hearing loss. His findings led to a Woburn-based startup called Frequency Therapeutics, which is currently running clinical trials with the hopes of making some noise as soon as possible. 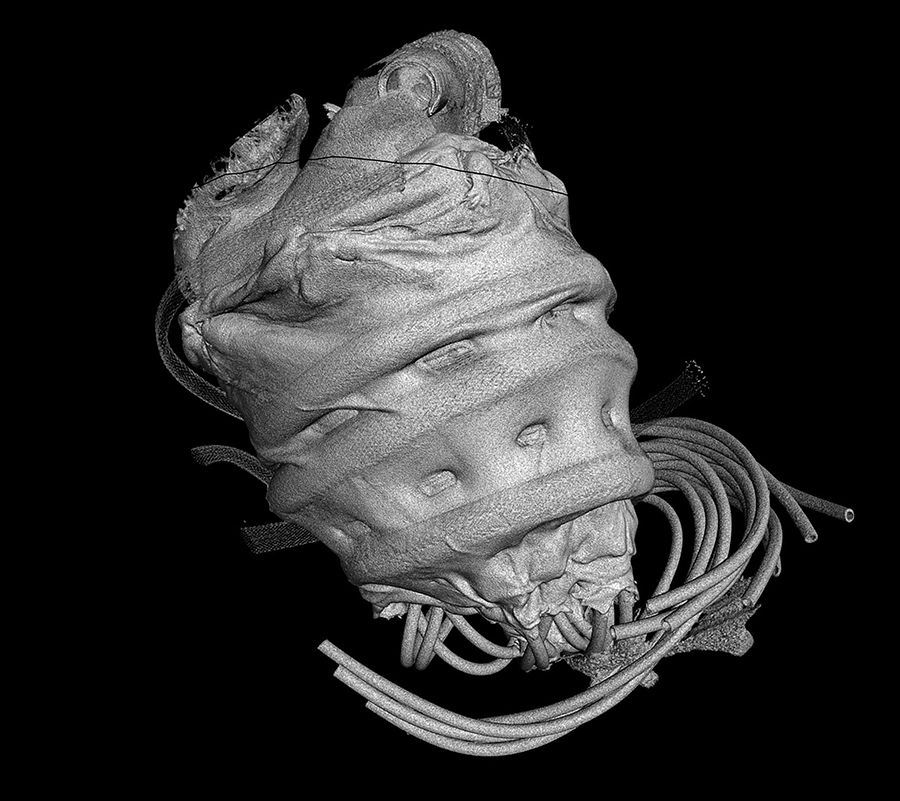 The latest innovation from Harvard: a robotic heart sleeve that could save transplant patients’ lives. / Courtesy image

Help for the Heart

When someone is placed on an organ transplant list, it’s a race against the clock: Will a donor come through before the body fails? But for patients awaiting a new heart, an invention from Harvard and Boston Children’s researchers could someday buy valuable time. A soft robotic sleeve encases the damaged organ, helping it beat by mimicking its natural twists and contractions. The “biologically inspired design,” first author Ellen Roche wrote in Science Translational Medicine, may “act as a bridge to transplant for patients with heart failure.” And that’s hard to beat.

Extending Lives with a Single Shot

The director of the Brigham’s Center for Cardiovascular Disease Prevention discusses the culmination of 25 years of work: a trial testing the anti-inflammatory medication canakinumab.

What does inflammation tell us?

In 1997, we published the first paper describing the fact that if you measured inflammation, you could predict who was at risk for a future heart attack or stroke. It explains why statin drugs are very effective: They are powerful cholesterol-lowering drugs that also reduce the inflammatory response.

How did CANTOS, your latest trial testing canakinumab, advance that research?

CANTOS was an attempt to finally, directly test the inflammatory hypothesis: Is there something beyond cholesterol that really matters in heart attacks? We were able to demonstrate, first, that inhibiting inflammation with canakinumab does indeed reduce rates of heart attack and stroke. We also cut all-cause cancer fatality in half, and lung cancer was cut by almost three-quarters.

How does that feel, after more than two decades of work?

The heart attack and stroke and cardiovascular death piece of this alone would be enough to keep me pinching myself. But the cancer benefit really was an enormous cherry on top. 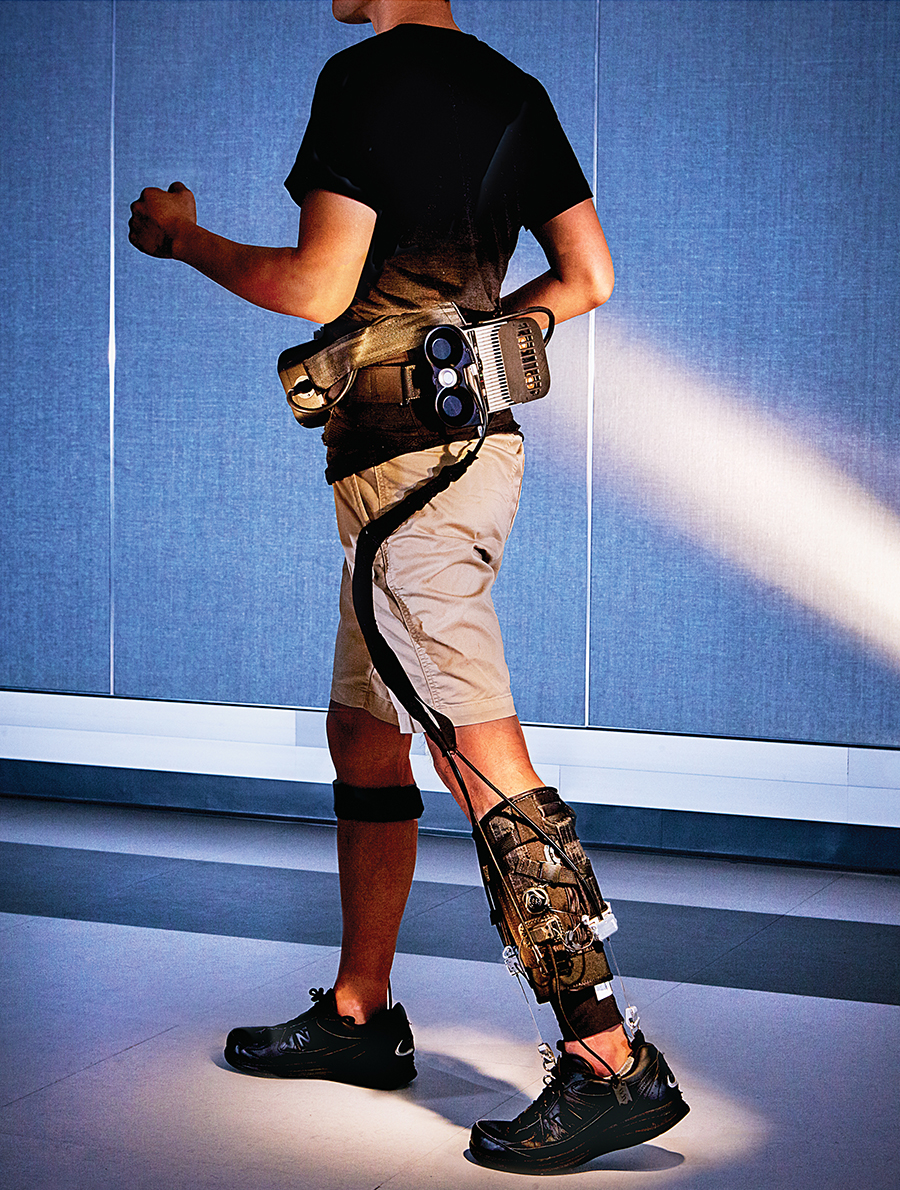 With cables, wires, and more than a touch of genius, this robotic “exosuit” could help stroke victims—who often suffer muscle impairment in one leg, and develop a lopsided stride as a result—learn to walk normally again. Designed by Harvard’s Conor Walsh, the soft, flexible exoskeleton uses sensors to track the stages of walking—lifting a foot, shifting weight, or placing the foot down—then offers users well-timed nudges at the hip or ankle to correct any irregularities.

The lightweight suit is currently used only in a research capacity in partnership with Boston University and Spaulding Rehabilitation Hospital, but in the future you might see these guys out walking the streets—both for stroke victims and the general public, as Walsh is also behind a similar invention that’s meant to help healthy folks increase their running speed. That suit essentially acts as a second set of hip extensor muscles, applying extra force to wearers’ hips as they run on a treadmill and helping them move faster and with less effort. How’s that for technical wear? 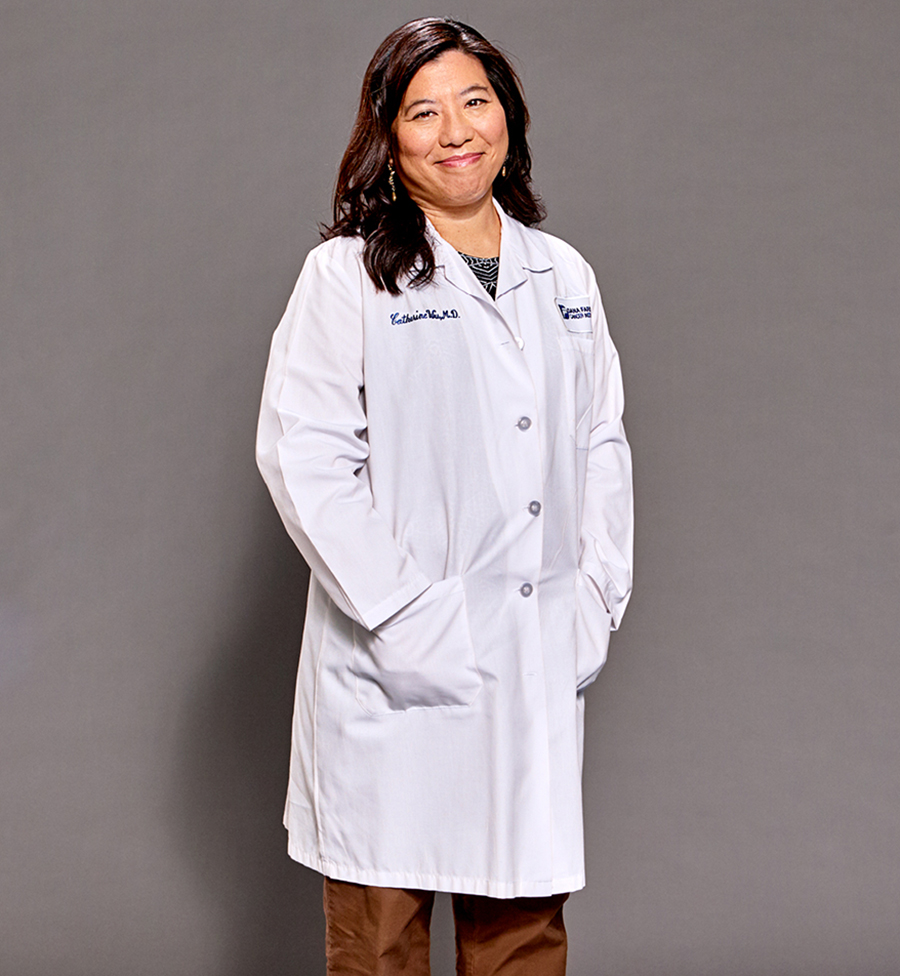 What if it were as easy to wipe out a tumor as it is to get a flu shot? Oncologist Cathy Wu is hard at work on what may be the world’s first personalized cancer vaccine, and it may not be as far away as you think.

The process begins with the tumor itself: Researchers sequence and analyze its DNA and RNA before mixing up a bespoke cocktail of peptides and immune-system stimulants. Over the course of 22 weeks and a few injections, that compound delivered a gut punch to malignant masses in human trials, attacking their genetic makeup. Eventually, Wu hopes the procedure will become even more streamlined, until patients can pick up their cancer treatment at the local pharmacy.

Early vaccine models have been tested on melanoma cells, but “conceptually,” Wu says, “there’s no reason this approach cannot be applied to many different [cancers].” Expect a first edition in about five years.

Donors are so 2017. In the future, A-positive or O-negative blood could be made to order, thanks to Boston Children’s Hospital stem cell researcher George Daley. Also the dean at Harvard Medical School, Daley this year marked a major milestone when he grew human blood cells in a petri dish. The therapy could have huge implications for patients with blood diseases or those in need of transfusions.

What does this discovery mean?

It’s the ultimate way of customizing stem cell therapies for patients with blood diseases. In the future, blood may not depend so much on donation, but rather on predictable manufacture.

Why is this a better solution than blood donations?

You can make a predictable supply, you know what the dose is, and you know that it’s pathogen-free. We can potentially treat any one of dozens of diseases that we currently don’t treat because of the risk-versus-benefit tradeoff.

So no more blood banks?

That would be the ultimate success, but we’re a long way from achieving that. We’re optimistic that we’ve made some major breakthroughs and we’re looking forward to being able to make the work much more clinically relevant in the future. 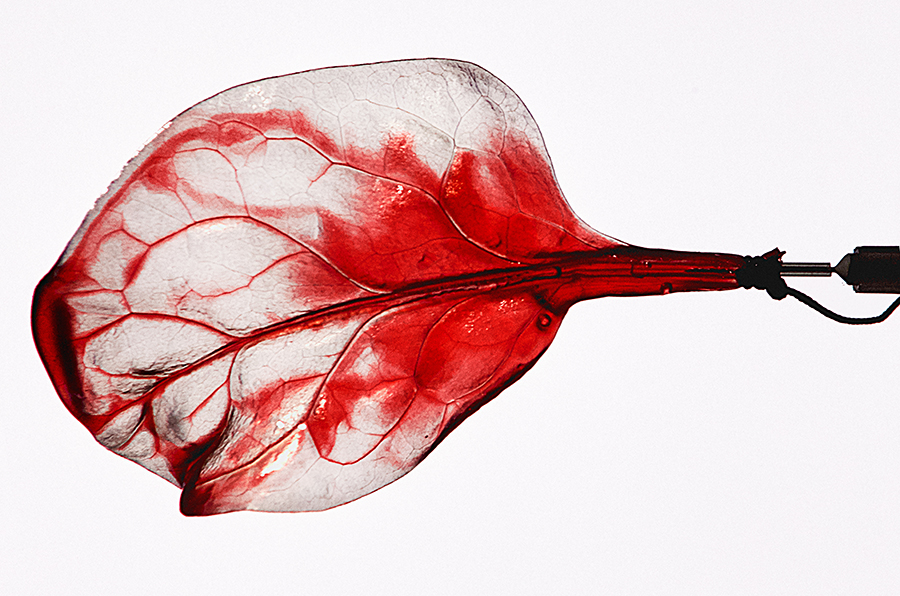 Could a simple spinach leaf be the canvas for growing heart tissue in the future?

Turns out veggies may be good for you in more ways than one: In March, Worcester Polytechnic Institute researchers managed to grow viable heart tissue…on a humble spinach leaf. It may sound like sci-fi fodder, but the turbocharged foliage could one day be used to replace dead heart tissue or patch damage caused by heart attacks. Here’s how it works.

Phase one: Spinach leaves are flushed with a detergent solution that strips them of all cells, leaving behind only the veins.

Phase two: Human cells are seeded onto the network of veins left on the leaf, mimicking the elements of a natural heart.

Phase three: Heart muscle cells are implanted onto the leaf, fed by blood and nutrients flowing through its capillaries. Five days later, heartlike muscle contractions begin and continue for 21 days.

Phase four: Someday, the technique could offer an accessible, eco-friendly way to repair tissue that’s been damaged or killed after a heart attack. “Adapting abundant plants that farmers have been cultivating for thousands of years for use in tissue engineering could solve a host of problems limiting the field,” Glenn Gaudette has said. In other words, Popeye would be proud. 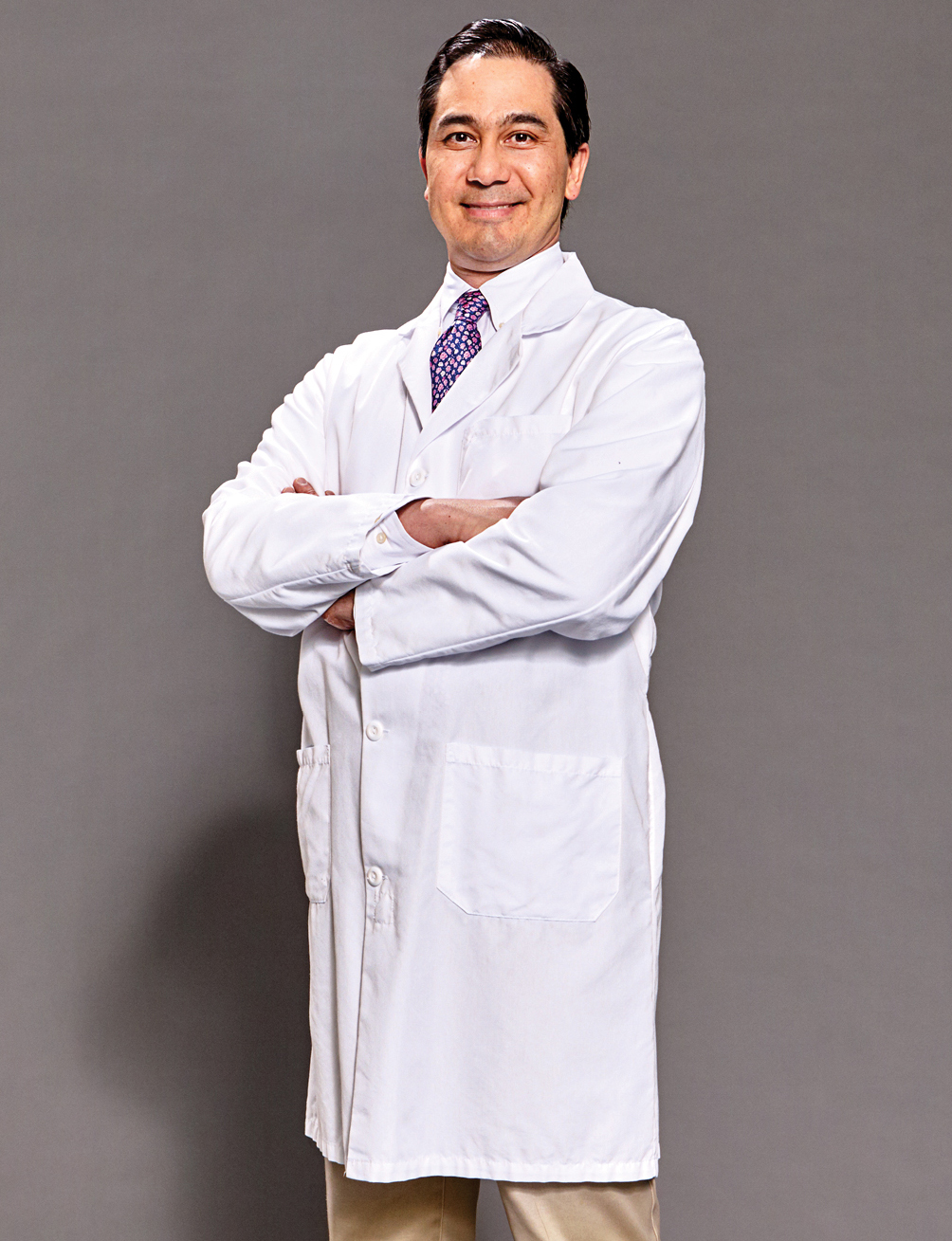 Stopping the Spread of HIV

In the 35-year history of the HIV epidemic, only four vaccine concepts have been tested for efficacy in humans. None has made it to market yet.

Thanks to Dan Barouch, the number of prospects recently jumped to five. And that, he says, is “really a big deal.”

As director of Beth Israel Deaconess’s Center for Virology and Vaccine Research, Barouch is behind a new vaccine that could stop the disease in its tracks. Using a weakened common-cold virus as a carrier, the injection introduces the body to harmless components of HIV, triggering an immune response that may help ward off future infection. In animal trials, the vaccine protected between 50 and 66 percent of subjects—and early-stage human trials suggest it can achieve a similar immune response in people. A new 2,600-person efficacy trial will answer that question for sure, with potentially life-changing effects for millions worldwide.

Currently, chronic traumatic encephalopathy (CTE)—a trauma-related brain disease commonly found in pro football players such as Aaron Hernandez and Junior Seau—can be diagnosed only after death. But thanks to Ann McKee and her team, we may one day be able to identify it before it’s too late. Here, she talks about her recent landmark study.

What, exactly, is CTE?

A protein called tau builds up in individual nerve cells in the brain, causing the nerve cells to stop functioning and eventually die. The condition is associated with behavioral changes, such as aggressive tendencies or impulsiveness, memory loss, and depression.

Tell us about your latest discovery.

We found that there was an elevated level of the biomarker CCL11, an inflammation protein, in the brain tissue and spinal fluid of deceased brain donors with CTE. Based on those results, we’re hoping in the future we can diagnose CTE through blood or a spinal tap in living patients.

What does this research mean for football players?

I think it has told us that playing football is a risk factor for developing CTE. Our goal at the center is to not only detect the disease during life, but also be able to treat it. 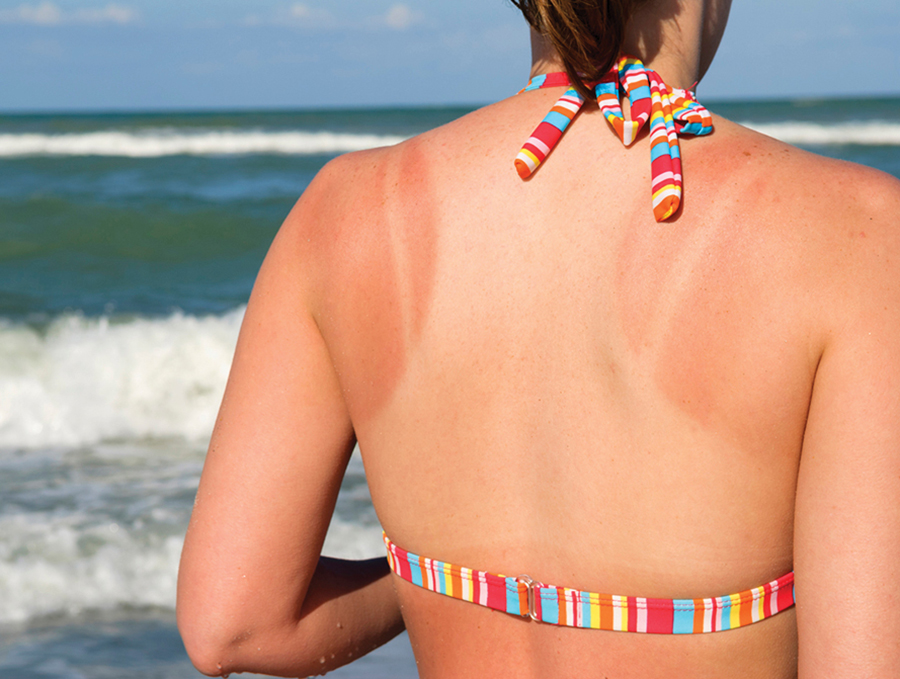 For years, we’ve had it drilled into our heads that tanning is a major skin no-no. But David Fisher, Mass General’s chief of dermatology, is throwing shade at conventional wisdom.

Working in conjunction with Dana-Farber chemist Nathanael Gray, Fisher may have found a way to make getting that perfectly bronzed glow not only safe, but actually better for you, especially if you’re fairer-skinned. Far from the average salon spray tan, the duo’s revolutionary topical ointment increased underlying pigmentation in human skin samples during early trials, visibly darkening them and helping them resist ­cancer-causing UV damage. “You’re not only failing to damage the DNA,” Fisher explains, “but actually the dark pigment is protecting the DNA.”

Fisher’s lab is in active talks with companies looking to bring a product to market within five years. While there’s still work to be done, he says there are “a whole world of potential applications” for a cream harnessing this science—from a sunblock complement to an anti-aging formula to a therapeutic agent for those who suffer from pigment deficiencies such as albinism and vitiligo. “This is not a new type of sunscreen or a new type of cosmetic,” Fisher says. “This is a really different strategy.”