Becca Pizzi will circumnavigate the globe in just a week for the second time in the World Marathon Challenge. 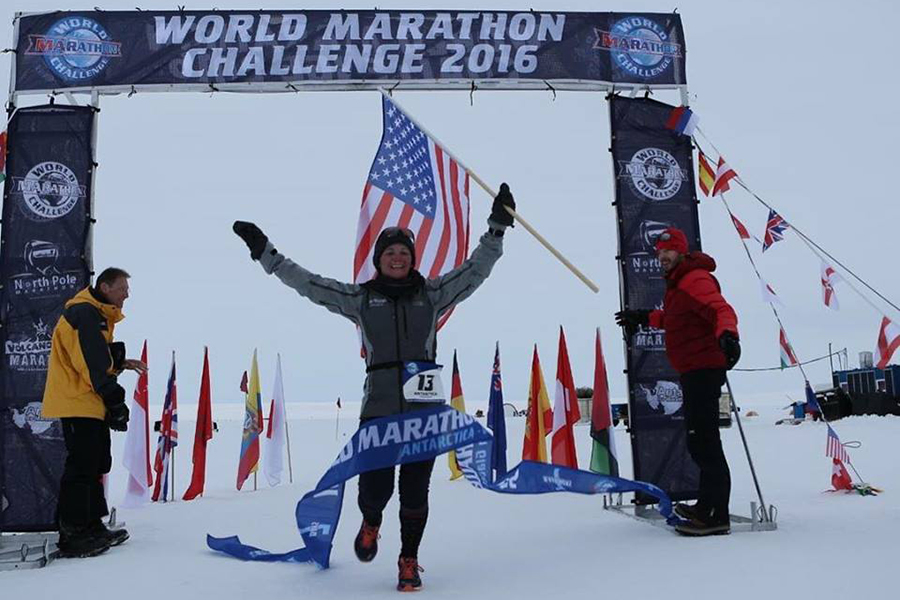 Becca Pizzi has run over 60 marathons—enough total miles to get you from Boston to New Orleans. But running is about to take the Belmont native much farther than Louisiana.

At the end of the month, Pizzi will compete for the second time in the World Marathon Challenge, which offers athletes the chance to do the impossible: Circumnavigate the globe and run a marathon on every single continent. Oh, and it’s only going to take a week. That’s seven marathons, on seven continents, in seven days.

For anyone who’s ever felt wiped out by the flight from Logan to Los Angeles, a weeklong trek across 16 time zones sounds grueling even without the running. But the 37-year-old Pizzi knows firsthand that the seven race feat is more than possible, because this isn’t her first spin around the globe. In 2016, when she crossed the final finish line in Sydney, Pizzi made history by becoming the first American woman to complete the challenge. She also came in third overall in the 2016 race behind just two of the male runners, and won the women’s race while setting a record for average marathon time.

By the time she’s done this time, Pizzi will have passport stamps from Novo, Antarctica; Cape Town, South Africa; Perth, Australia; Dubai, UAE; Lisbon, Portugal; and Cartagena, Colombia; before finishing her last race in Miami. Pizzi, who owns a daycare and manages Moozy’s Ice Cream in Belmont, says she decided to take on the 7-7-7 again because of how much she loved it the first time.

“It was a goal of mine to show my 10-year-old daughter, Taylor, that you can do anything you put your mind to if you believe in yourself,” Pizzi says. “It was an incredible journey training for it, meeting people. I love to run, and I love to travel, so I got to do my two favorite things around the world in seven days.”

In 2016, Pizzi was in a field of just 15 runners, all of whom completed the seven races. But this year, thanks to what Pizzi says is race director Richard Donovan’s stellar reputation, 55 athletes will take on the challenge. But don’t expect to find the runners in coach: For the first time, race participants will travel on a private VIP plane, which includes seats that fully recline into beds—a key feature when you’re, you know, trying to catch some shut-eye between your third and fourth marathons in as many days.

On top of the exhausting travel itinerary, the weather diversity of the race locations presents a unique challenge, too. The athletes will endure huge temperature swings between Cartagena, where the average January temperature is 88.2 degrees, and Novo, where it may not break 25 degrees. Pizzi says working out in Boston, with its less-than temperate winters, helps prepare a bit for the Arctic cold.

But her training regimen includes more than just forays into the Boston freeze. To prepare for such an intense endurance challenge, Pizzi completes several 5 a.m. runs each week. And now, she’s lucky enough to receive some of the same training as another prominent local athlete: Tom Brady. Pizzi recently teamed up with TB12, Brady’s “sports therapy” company, and has been heading out to Foxborough for training sessions.

“They were totally inspired by what I was doing, so they invited me out to the center… and I felt like I was in incredible hands,” Pizzi says. “I thought, ‘It doesn’t get any better than this. If it works for Tom Brady, it will work for me.’”

In addition to her trip around the world, Pizzi has completed several other extreme endurance challenges. She’s run nine marathons in the last year, including the Volcano Marathon, which takes places at 14,600 feet elevation in Chile’s Atacama Desert, the driest place on Earth. Pizzi is also hoping to run 26.2 in all 50 states. She’s already checked off 31 of them, but one place, of course, really stands out: Boston. Pizzi has run the Boston Marathon 17 times, doing so for the first time as a high-school student.

“You never, ever forget your first [Boston] Marathon. … I remember crossing finish line, and I’ll never forget that moment,” Pizzi says. “I grew up watching the Boston Marathon with my parents, my grandparents, and I always said, ‘I will run this.’”

Having accomplished that many times since, Pizzi still says,” There’s nothing I’d rather be doing on Patriots Day than running the Boston Marathon.”

She says she loves the course itself, and that, in addition to the Arlington Bike Path and the Charles River, the race route is one of her favorite places to run around Boston. She’s tremendously appreciative of all the local support she’s gotten throughout her running career.

“I feel so lucky to have the Boston community behind me,” Pizzi says. “They rally for me, they support me, they’re there for me. … A lot of people in Boston enjoy running and like to run, and I don’t know if I would get this support many other places. But I’m so lucky to have it here in Boston.”

Although she’s already amassed quite the running résumé, Pizzi still has a few races on her bucket list. She’s focused on the Tokyo and London Marathons, so she can finish up the sport’s major races. And, even though she admittedly doesn’t love swimming or biking, she wants to take on the Kona Ironman.

For Bostonians looking to get a taste of Pizzi’s life without actually lacing up a pair of sneakers, there’s one delicious option: Moozy’s, the ice cream shop she manages, serves a scoop called the “Becca 7.” The s’mores flavor is made with seven ingredients, and you can try it even if you haven’t run thousands of miles.