Peek Inside Reebok’s New Global Headquarters in the Seaport

It has its own spin, yoga, and dance studios, plus a boxing ring. 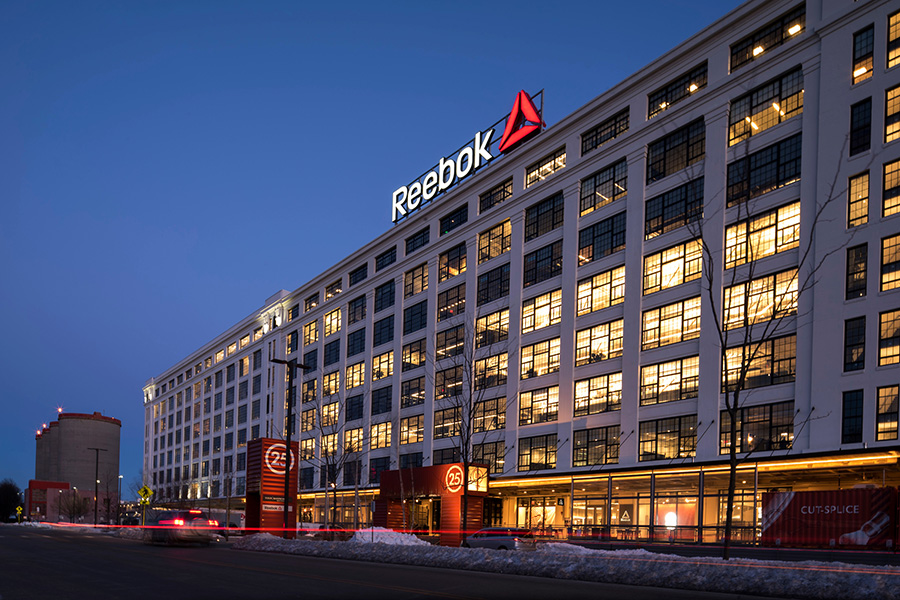 Out with the old and in with the new. As Reebok begins to settle into its new home at the edge of Seaport, we got the chance to see what the footwear company’s new workspace was like. And, to be honest, we’re a little jealous.

Walking into this newly renovated 220,000-square-foot space in the Innovation & Design Building is much like walking into Reebok’s own (very fit) city.  It’s complete with a state-of-the-art two-story gym, and has healthy grab-and-go bowls and smoothies for employees.

The company began making the move last September from their campus in Canton. By December, most employees were transitioned to the new HQ.

“We have a better sense of the community in this building,” says Matt O’Toole, Reebok’s CEO. “We told everyone they’re not going to have an assigned cubicle or workspace and it has fostered so much more face-to-face interaction, not to mention the productivity has sky-rocketed. No longer do we need to schedule meetings or send a bunch of emails to get things done.”

Reebok was going for a “gym-feel” in every aspect of the new open-concept space. Instead of individual offices, each employee is assigned a locker for their belongings. They sit in work areas according to their departments, called neighborhoods. O’Toole doesn’t even have an office.

This interactive set-up, with long tables and couches for employees to work at, as well as 100 meeting rooms, has inspired the employees to be connected to every step of the production process. “Even if someone isn’t directly connected to color or design they’re seeing it happen in front of them,” O’Toole explains. “And they feel like what they’re doing is directly making an impact on the product we’re putting out.” 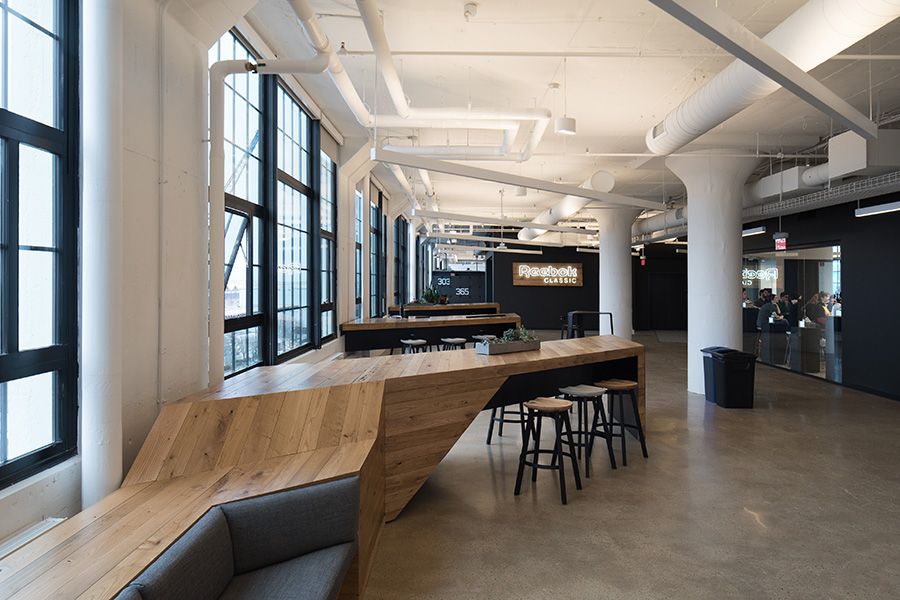 O’Toole says the office gives each employee a new sense of ownership of the brand. The blending in the back end creates a more blended product on the front end—which is just what the consumer wants right now O’Toole says. The company is also able to roll out some of their new products right inside the building. At ground level, there’s a store called Fit Hub 2.0, the only retail space of its kind. While shopping, customers are able to customize their own shoes and shirts directly on site and leave with a one-of-a-kind products as soon as 30 minutes later.

“We wanted to find a way to bring the start-up feel to a large corporation,” O’Toole says. “The world is going faster and the traditional planning of a corporation is just too slow—there’s no reason why we can’t bring what’s new and exciting to the market now.”

O’Toole describes Reebok’s previous location in Canton as a beautiful way to grow up in the suburbs—much like raising a family—but that it was time to move to where the academic institutions, innovation, and creativity were. Most importantly, they didn’t want to lose their connectivity to sport or fitness while making the switch.

“To be credible in making fitness products we better be doing the activities,” O’Toole says. “We don’t want anyone who doesn’t do aerobics, Crossfit, or races to be working on shoes or products for those things.”

Reebok encourages its 750 employees to utilize the in-house gym space, which is fully equipped with spin, yoga, dance studios, a boxing ring, and a Crossfit box to be better connected to those activities and their products. Plus, each visit employees make to the gym is a credit back to their $75-per-month gym membership. (Don’t we all wish we could be paid for working out?)

O’Toole says Reebok is looking to reclaim its 100 percent focus on fitness. “There are only so many new and exciting things you can come up with behind a gated community,” O’Toole explains, referring to the previous location in Canton. “Being right in the middle of the city, we’re looking for new things everywhere. What I see happening in the future is the combination of bringing together the world of style and innovation and creating a new culture of fitness—exactly what does it look like to live a fitness lifestyle no matter where you are?” 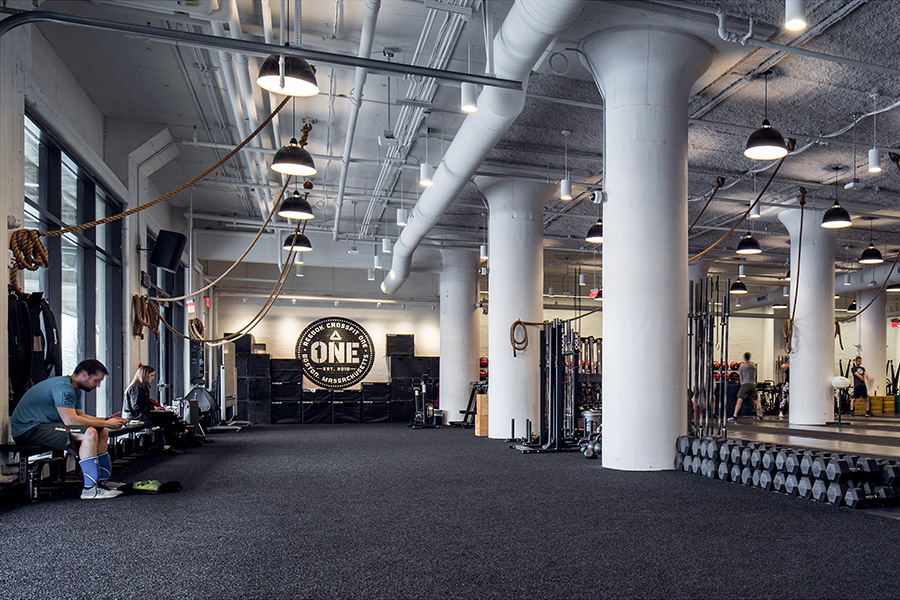 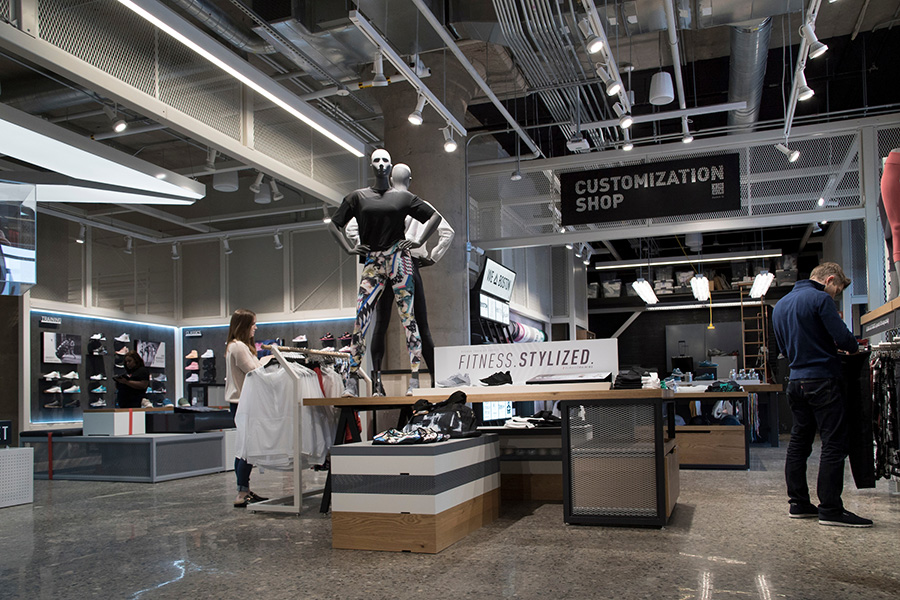 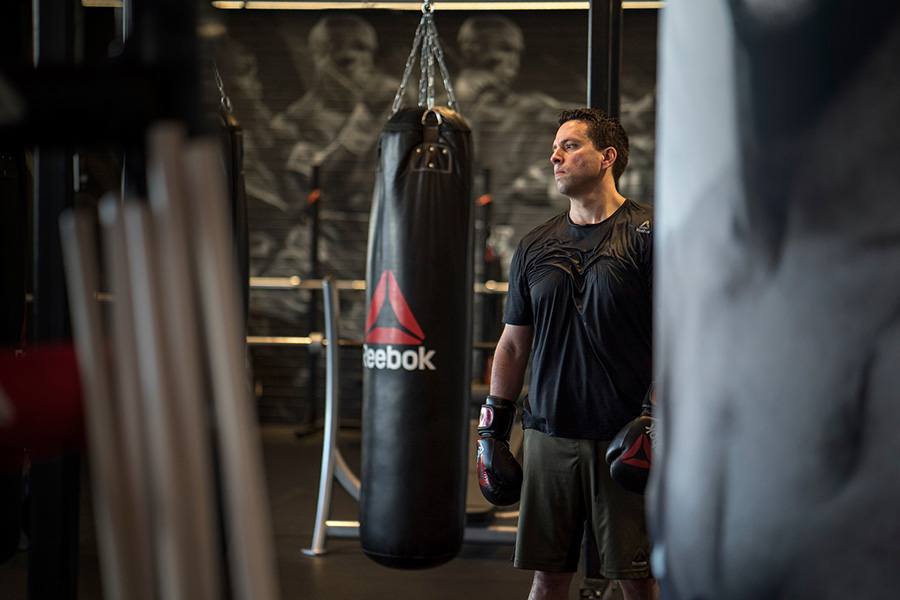 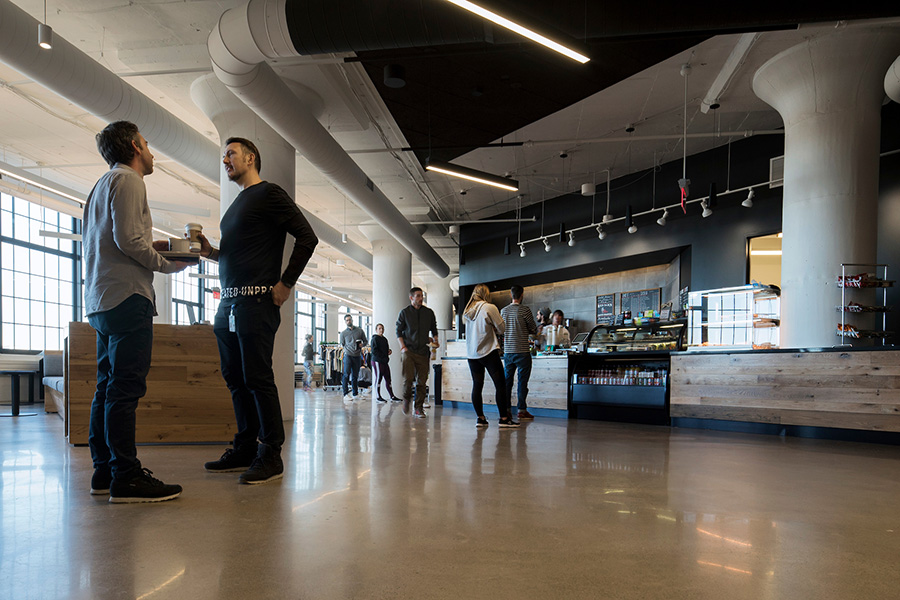 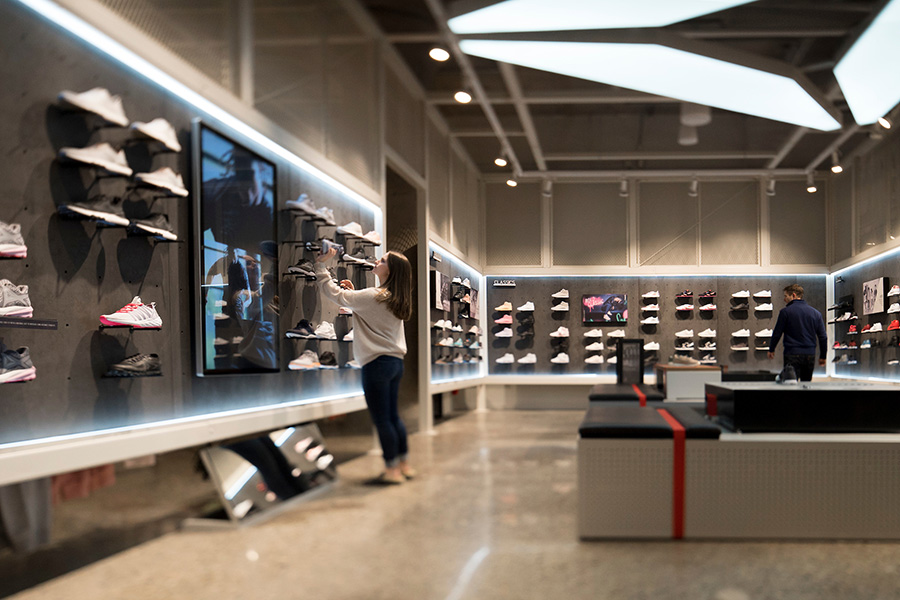