Saucony Teamed Up with Dunkin’ Donuts for a Running Shoe 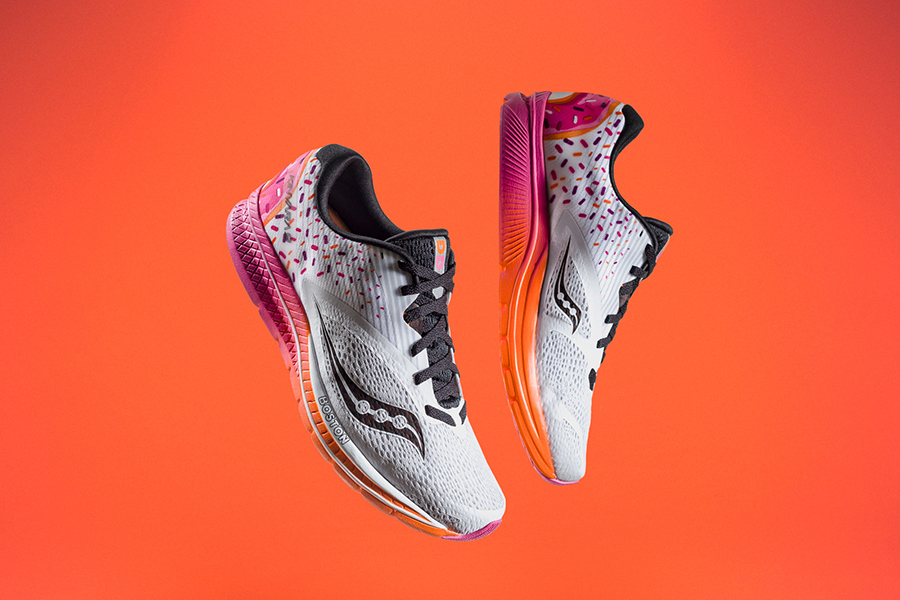 Run in style this marathon season…or maybe just to the nearest Dunkin’ Donuts, with these new donut-inspired kicks.

Two local brands, Saucony and Dunkin’ Donuts, are coming together to not only meet runners’ need for a lightweight and form-fitting shoe, but also provide footwear that feeds their obsession for caffeinated beverages and post-workout sugary snacks.

The shoe, which has colors similar to the Dunkin’ Donuts box, features a white top and a strawberry-frosted donut on the heel surrounded by orange, magenta, and chocolate covered sprinkles. Because what donut would be complete without sprinkles? The Dunkin’ Donuts logo is at the top of the shoe’s tongue and the brand’s signature tagline America Runs on Dunkin (might we add literally) is placed in the center heel along the reflective strip. The sock liners are even detailed with images of Dunkin’ Donuts hot and iced coffee and the Saucony river logo is made special with a coffee-bean print detail.

Sure, running with a large donut emblazoned on your heels may seem flashy, but at least donut apparel makes for a great conversation starter. The irony of it all just makes you want to ask…why?

Your caffeine cravings may not be curbed with these details, but at least the shoes were made for running. All that Dunkin’ branding has been applied to Saucony’s Kinvara 9 shoe, which was named “Editor’s Choice” by Runner’s World in the 2018 Spring Shoe Guide, which praised the shoe for its lightweight cushioning.

Besides, it’s not like runners don’t enjoy a little Dunkin’ now and then. According to Strava, a website and mobile app used to track athletic activity, their “2017 in Stats” review found that 149,055 activity titles contained the word “coffee,” bringing it to the number one mentioned food and beverage item amongst runners, with donuts being number six.

“As we celebrate Saucony’s 120th anniversary we’re proud to honor our hometown marathon and Boston’s rich running heritage,’” said Amanda Reiss, chief marketing officer of Saucony, in a press release. “The shoe celebrates the joy, determination and delicious obsession of runners everywhere with a sense of playfulness that’s true to the heart and soul of both brands.”

There’s really no need to make sure these donuts fit your macros, but if your shoes inspire you to swing by Dunkin’ on your way home from a long run, who are we to judge?

Available for pre-order today on Saucony’s website and at all Marathon Sports locations April 3rd for $110.00. Donut lovers and running enthusiasts will also be able to find the shoe at the John Hancock Sports & Fitness Expo April 13th-April 15th.