A Guide to Massachusetts Marathons Happening in Spring 2018 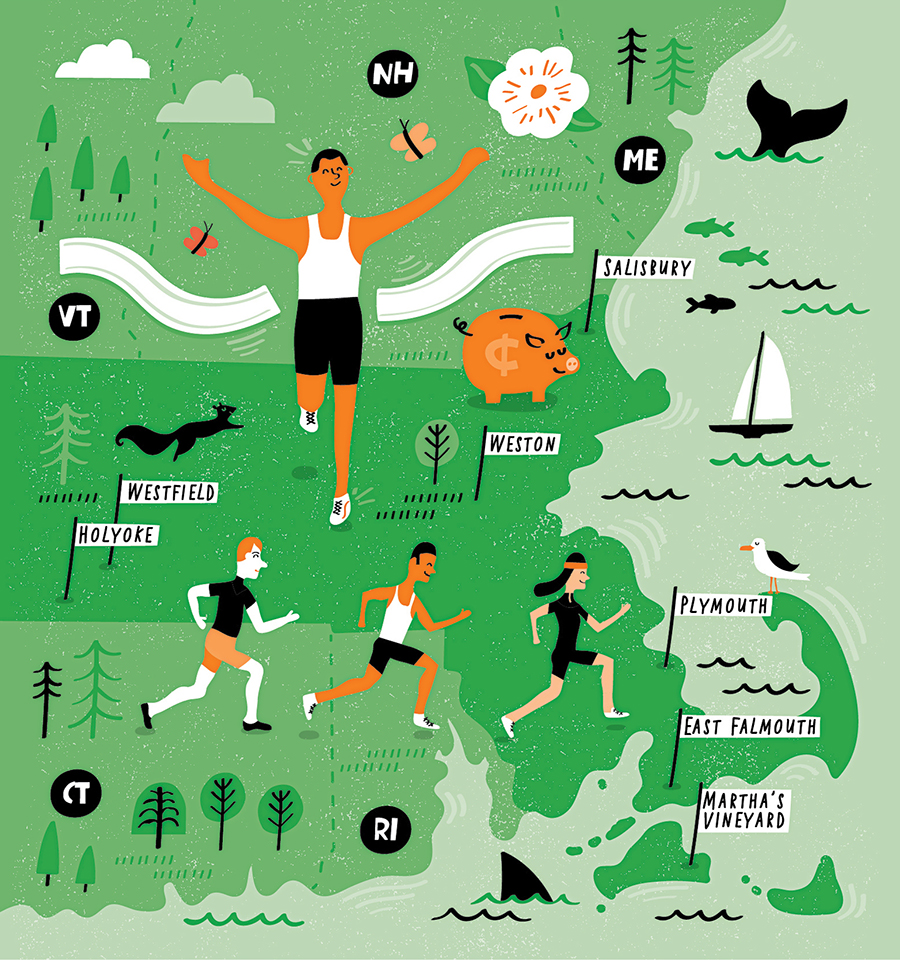 Between its worldwide prestige and its challenging course, the Boston Marathon can be one intimidating race. Even if you have the confidence to run it, you first need to qualify and be accepted, a notoriously difficult feat. But if you didn’t gain entry to Beantown’s big chase, you can still pin on a bib and take on 26.2 miles of Massachusetts this spring. There are a multitude of marathons happening all over the state that offer more-flexible registration guidelines—and bragging rights that are just as satisfying.

Husband and wife Eli and Lauretta Bailin created this marathon as a way for fellow enthusiasts to run a race and qualify for the Boston Marathon without breaking the bank. They’ve cut costs by stripping the production to include essentials only—so expect water stations, pacers, and medical staff along the oceanside route, but don’t count on fancy merch or awards.

Get ready to hop some boulders and climb some hills on this single-track race that winds through the meadowland and forest of the Frances A. Crane Wildlife Management Area. Although the use of earbuds and headphones is strongly discouraged due to the terrain, you’ll have the sounds of the local wildlife to encourage you. Plus, all the proceeds go to five chosen charities, which is inspiration enough. Registration closes early, though, so if you miss this installment, put it on your calendar for next year.

TARC stands for Trail Animals Running Club, and although no furry friends race alongside you, you’ll feel like a beast when you finish. The club was founded by running fanatics in Boston during the 1990s; in 2011, they introduced their trail series, of which the Spring Classic is a part. The loop is a mostly single, flat track with some rolling hills, rocks, roots, and creek crossings through the bucolic woods. Although not guaranteed, a critter spotting or two is likely.

Why not share the fatigue of running a marathon with one to five of your closest friends? The more members on your relay team, the fewer times you have to conquer the just-over-four-mile course along the coast. When you’re not running, cheer on fellow competitors with help from a DJ, then celebrate the race’s conclusion with local craft beer from Mayflower Brewery in a custom stein at the after-party.

Held in memory of race founder Walter Childs, this marathon is one of the oldest in the United States and can be used as a qualifying race for Boston. In fact, just over 10 percent of last year’s finishers qualified, according to FindMyMarathon.com. The course is mostly flat on unpaved country roads that loop several times around the Whiting Street Reservoir and end at the Summit View Banquet and Meeting House for a catered awards party.

This race is part of the New England Challenge, a USA Track & Field–certified series that hosts marathons on six consecutive days in the six New England states, starting in Maine on a Monday and ending in Rhode Island on Saturday. Massachusetts’ course travels around the 300-plus acres of trails and gardens in picturesque Stanley Park. Be on the lookout for black squirrels, a Westfield phenomenon since the 1940s.

Take a “runcation” on the Vineyard and qualify for the Boston Marathon while you’re at it. The route passes through the Manuel F. Correllus State Forest located in the center of the island, past the captains’ houses of quaint Edgartown, and over the bridge made famous in Jaws before finishing in the charming Ocean Park in Oak Bluffs. You’ll definitely want to turn this race day into a long weekend to explore the rest of the island—but maybe not on foot.