Catching up with Kathrine Switzer before the 2018 Boston Marathon

The first woman to register for the Boston Marathon is back in town. 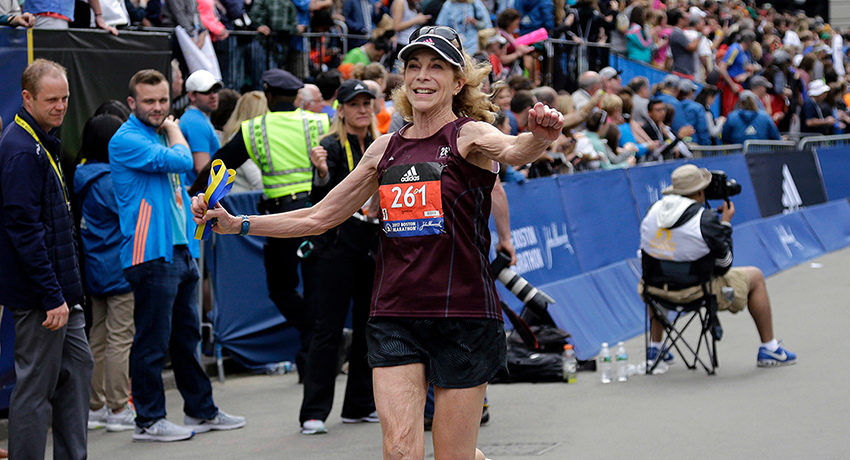 Katherine Switzer has been to every Boston Marathon since her historic run in 1967 except for two. For 49 years she says she’s been making the annual pilgrimage back to Boston, the place it all began for her, to either commentate for television or run the race, saying she owes everything she’s done to the streets of Boston.

“Boston is like mecca, it’s the epicenter of running,” she says. One year after her 50th year anniversary victory lap (if you can even call 26.2 miles that) from the date she became the first woman to ever register and run the Boston Marathon, Switzer will be back this year doing what she’s most passionate about—empowering other women.

“During that race in 1967 I began to wonder why other women weren’t there,” Switzer says. “And I realized it was because they didn’t have the same opportunities. I told myself after that race I was going to create those opportunities. At the time I didn’t know what that looked like, but I was determined.”

Her first order of business was to become a better athlete to prove that women do belong on the marathon course. She’s run the Boston Marathon nine times, placing second in 1975, and she won the New York City Marathon in 1974.

She’s also taken her work global, creating an International Running Circuit for women in 1978 and spearheading 261 Fearless in 2015, a global non-profit to empower and unite women through the creation of local running clubs. “We’re a part of a movement that’s changing the landscape for women,” Switzer says. “A rising tide lifts all ships, and other countries around the world are seeing that.”

This year, 261 Fearless, named for the bib number she wore in 1967, will have 47 runners fundraising and racing in the Boston Marathon. Although Switzer won’t be leading the pack, she’s thankful for all the support from these other women. “I won’t be here in 50 years,” she says. “I feel a sense of contentment to be able to pass the torch to the next generation of very passionate women who are going to make great social and positive change.”

Swtizer may be sitting out the 122nd running of the Boston Marathon, but that doesn’t mean she’s done with marathons: She’ll be lacing up her sneakers and strapping on a bib for the London Marathon next weekend. It was her own advocacy work that helped give women a chance to race there—she helped stage a women’s race in London in 1980, and four years later women marathoners were finally allowed to compete at the Olympics for the first time at the Los Angeles games.

Now 71, she says she wanted to race the races that she had a hand in creating, and felt left out when she was seeing other women her age, or older, running in them. “You could say it’s a bucket list race,” she says. “I’ll go knock off a couple more and then go plant some petunias.”

Also on this unstoppable woman’s bucket list? The Tokyo and Antarctica Marathons.

“I’ve kept fit all my life, but having said that, you’re never too old,” Switzer says. “Get off the sofa, put your sneakers on, and walk to the mailbox. It all starts there.”

She says she’s seen some pretty astonishing things from women all over the world. With her work happening regularly in 27 different countries, she says you get to know a country like nothing else when you run in it.

“Running stands as a beacon,” Switzer says. “I often say I don’t know who this guy is over here, this person is a different race than me, she doesn’t speak my language, and I don’t know what her orientation is, but at the end of the day we’re sweating together and we’re going to hug each other at the finish line, and I will trust them with my life.”