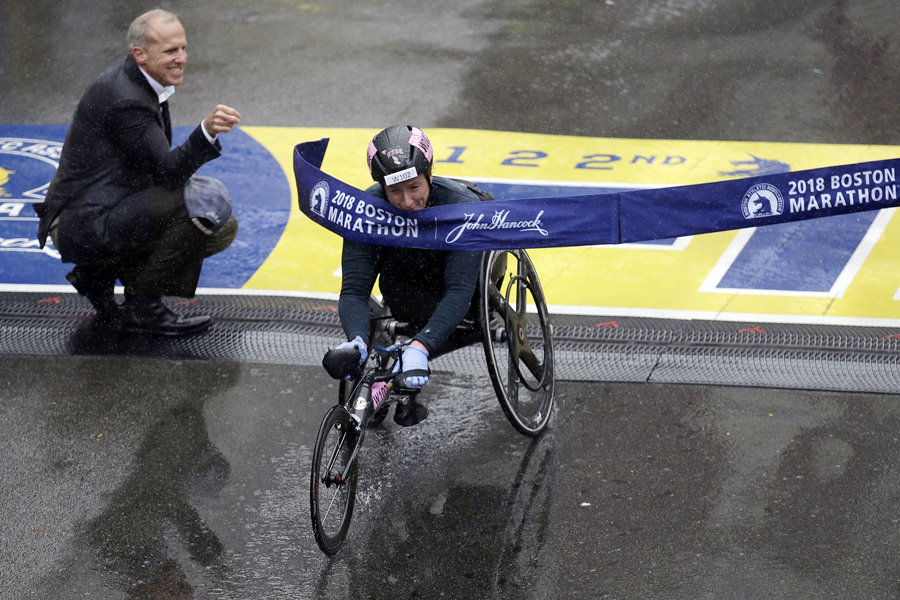 Tatyana McFadden, of the United States, crosses the finish line to win the women’s wheelchair division of the 122nd Boston Marathon on Monday, April 16, 2018, in Boston. (AP Photo/Charles Krupa)

Waiting at the start line of the 122nd Boston Marathon at 9 a.m. this morning, Tatyana McFadden was all smiles. She chatted with her surrounding competitors and appeared calm and unfazed by the frigid temperatures and steady rain. Coming down the home stretch on Boylston Street, the smiles were back as she broke the tape and claimed her fifth Boston Marathon victory.

A master of hills, McFadden made her move at mile 11, when she pulled ahead of Manuela Schar and by mile 13, she had pulled far ahead of the pack. By mile 21, she had nearly a 12 minute lead on the nearest second place finisher, and came into the finish at 2:04:39, the slowest time in the division in 30 years. Today featured the coldest marathon start time in 30 years.

Despite the weather, McFadden says the crowds were still amazing. “I was climbing Heartbreak Hill at only 3mph and I heard a girl tell me ‘Happy Birthday’,” she says. “The crowds always mean a lot.” The weather was also a deterrent to her speed—she says Boston is typically a really fast course, but this year, with it being so wet, she couldn’t go too fast. The ground was just too slick.

After coming in fourth at Boston last year and struggling with health issues, this was a huge moment. Crossing the finish line in the top spot not only secured her fifth Boston victory, but also a record-setting 22nd victory in the World Marathon Major series.

“I could see Schar on the uphills and on every uphill I would get a little closer and on every downhill she would get a little farther away,” McFadden says. “But I never gave up my pace and was able to pull ahead when I needed to. I’m just extremely blessed to have a great coach and training program, to be healthy, and back in Boston.”

Next weekend, McFadden will head to London for the London Marathon, where she was forced to withdraw last year due to illness. She has four wins under her belt in London and will be seeking her fifth.

Speechless today!!! I can’t believe I won the @bostonmarathon @jhboston26 . Today’s condition was tough but I juat tried to keep it positive the whole way. Thank you everyone for the support for the last year. It’s incredible to be back 💙 pic.twitter.com/P8IN5D6IFz