I Tried It: Stand-Up Paddle Board Yoga at Fort Point Pier

I took my down dogs, Shavasana, and even attempts at tree pose to the water with SUP-Yo Boston—and am proud to say I didn't fall once. 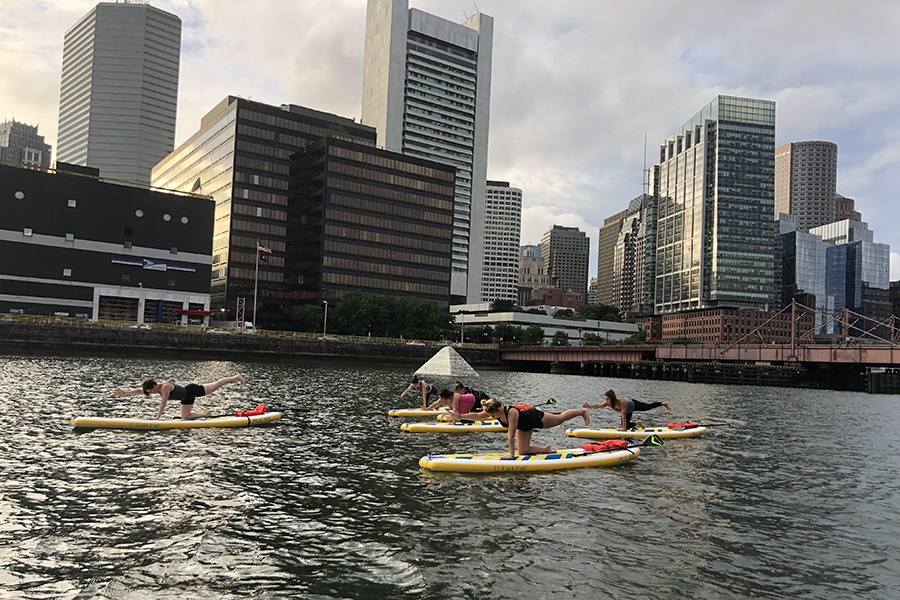 This city’s love for yoga runs deep. And rightfully so. It’s the perfect way to start your day or unwind after a stressful eight hours at work, and with the variety of offerings—rooftop yoga, salt cave yoga, even yoga on old warships—there is just about something for everyone, from the diehard yogis down to the dabblers (like me).

When I first heard about stand-up paddleboard yoga, I couldn’t even imagine staying afloat long enough to land a downward-facing dog. The first time I attempted standing up on a paddleboard, off the coast of Florida, I remember spending more time in the water than casually cruising on top of the structured surface. But as the sport continues to grow in popularity and there are more and more opportunities to try it out, I just couldn’t put it off any longer. My curiosity was piqued: Could I actually do it, and just how long could I stay on top of the board without taking a dip in the Fort Point channel?

Hesitantly, but positively, I signed up for a sunset, weeknight SUP yoga class with SUP-Yo Boston. I showed up sans swimsuit and towel—some may call it underprepared, I call it overconfident and motivational. I had a hot date (with my family) at Legal Harborside after the class, so the need to stay dry was real. The class was small, including four other women, my sister, and our instructor, Stephanie McIsaac.

The paddle boards needed to be inflated, but I would never have guessed; they felt like firm, hard plastic. While waiting for them to take shape, I chatted with the other participants, assessing our readiness to embark on this possibly water-logged adventure. One woman had done it before, and she seemed excited and ready. Two others had never attempted it but were eager to try, while another thought for sure she was going to fall in. My sister and I really had no idea what to expect.

When the equipment was ready, at McIsaac’s instruction we all hoisted the awkwardly long contraptions down to the dock. We each had an anchor, attached to a 20 foot rope, in our other hand, and a paddle strung somewhere between the board and our armpit.

One by one, McIsaac helped us slide our paddle boards off the dock and into the water. She told us to paddle out while sitting on our knees (or standing if we chose), before dropping our anchor to the bottom of the channel. The current was strong and the wind was a factor, so this was the most strategic part of the class. Even more challenging, while some people (myself included) had real anchors, others had small Lululemon bags filled with bricks. Word on the street is the bricks don’t stay put as well.

When we were all anchored and ready to strike a pose, we started by setting an intention for the class. McIsaac offered one for us: “If you think you can or can’t, you’re right.” It became the theme for the class. She instructed us from the dock through a traditional yoga flow, beginning in seated positions with small back twists, then working our way to cat/cow and bird-dog poses on all fours, before slowly making our way up to forward folds and warrior poses standing atop the board.

One of the major things I noticed while on the board was just how drastically different my balance was on one side compared to the other. Even on all fours, I felt stronger and more stable when my right side was firmly planted on the board. But as soon as I shifted my weight to my left side, muscles throughout my body quivered under the instability.

The second thing I noticed was that the more I moved on the board and with the water—as opposed to fighting it, or staying rigid—the more comfortable I became. McIsaac, at one point, even instructed us to stand and shift side-to-side to feel the water underneath our feet and become familiar with the way the board moved.

The only mishap in the almost-hour-and-a-half that we were on the water was when one fellow paddler’s Lululemon bag make-shift anchor dislodged, and the current swept her nearly all the way to the Boston Tea Party ships on the other side of the channel. In case you are curious, yes, the people on the patio outside Lolita Fort Point had a fantastic view of the dramatic show. Even though the drifter’s rescue put a halt to our practice, it didn’t feel like it took away from anything. This was the nature of the class.

The second part of the flow consisted of trying our hand at harder poses, including crow pose, headstands, and tree pose. Every single person in the class tried them all, which McIsaac said was impressive and something she had never seen before, and a couple yogis even maintained their balance long enough to successfully execute a headstand. I was not one of those people.

The first tumble of the evening came at the expense of tree pose—it’s hard to balance on one foot on a moving and unstable object! But, she got right back up, no problem, and attempted to balance again, and again. She fell three more times.

Upon further reflection, I don’t think you’re really trying hard enough if you don’t fall. But at the same time, it was easy to not get wet. So, if that’s your biggest concern—as it was mine—what’s the worse that can happen? You’re not in a studio where falling on the hard ground is going to bruise your body. You might get a little wet, but had it been warm and sunny I don’t think I would have minded a cool dip in the saltwater.

We wrapped up class with a couple pigeon poses and wheel, and then laid flat on the boards in Shavasana. Admittedly, I left my eyes open to watch the moving clouds and seagulls overhead, while dipping my fingers into the chilly water at my sides. Relaxing is an understatement.

My hesitation to try this unconventional way of practicing yoga—and my strong desire not to get wet—seems so silly now. I might just invest in my own paddleboard so I can practice cool yogi tricks from the water any time I want. 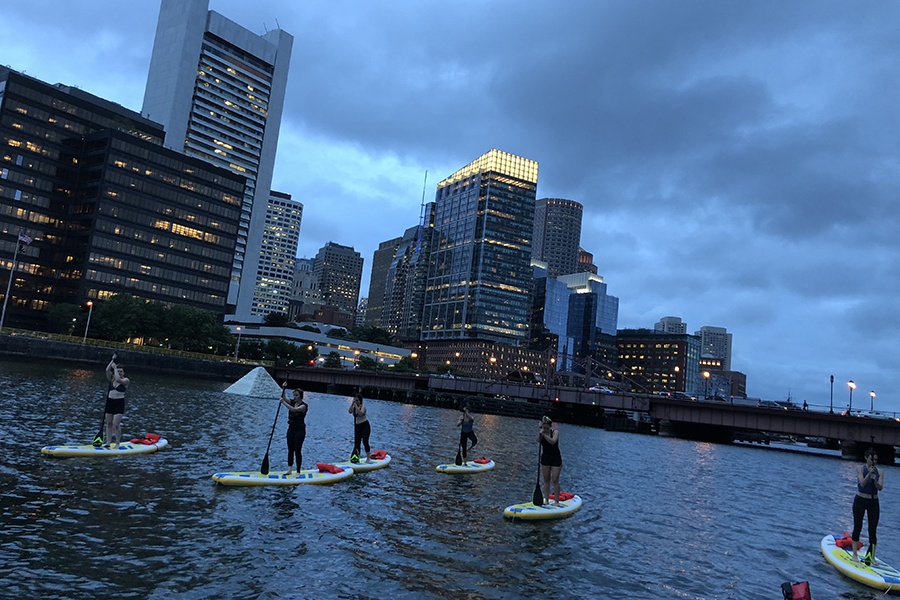