Check Out This Massive Intact Blood Clot Someone Coughed Up

The New England Journal of Medicine released the picture in their regular photo series. 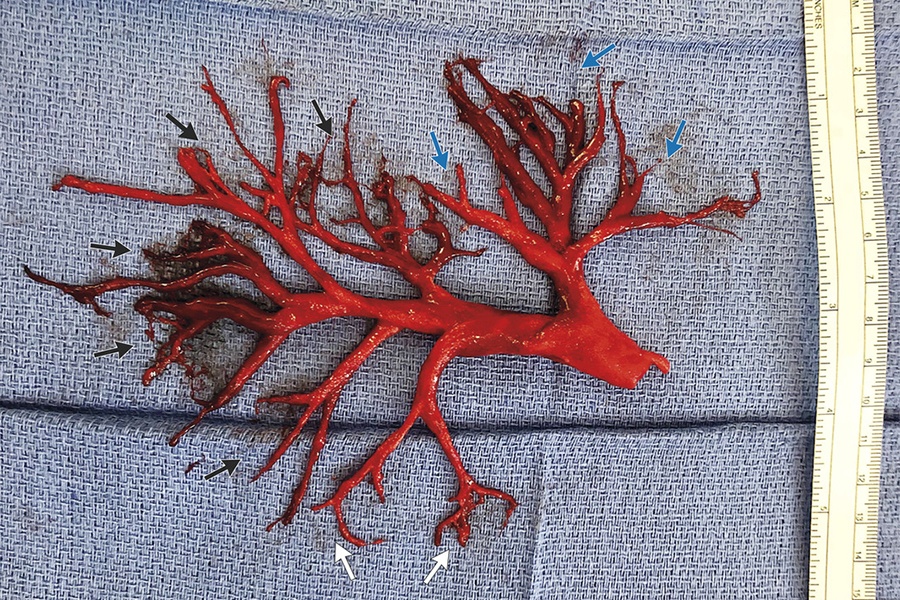 The human body is a strange and mysterious thing. The New England Journal of Medicine’s most recent addition to its photo series is certainly no exception.

On Monday, The Journal tweeted a picture of a completely intact blood clot, shaped just like the right bronchial tree in the lung. And just to be clear: It wasn’t extracted in any medical surgery or recreated with cherry red clay. Nope, it was coughed up in one piece by a patient in San Francisco. It’s kind of interesting to look at and beautiful to admire—it looks like a plant!—but then you remember it literally came from someone’s mouth, and disgust sets in. Could you imagine coughing this thing up?

All queasiness aside, Georg Wieselthaler, the transplant and pulmonary surgeon at the University of California at San Francisco who dealt with the case, told The Atlantic the patient was initially admitted to the intensive-care unit with aggressive end-stage heart failure. The patient was put on a pump to help maximize blood flow through the body and was administered anticoagulants to make the blood thinner and prevent clots from forming. These medications are what caused the patient’s blood to eventually break out of the network and into the lower right lung—due to the clotting agents not being able to repair cracks in the system.

The patient spent several days coughing up smaller clots and then one day a large, deep cough produced the massive six inch wide clot folded in on itself. After unfurling the bundle, Wieselthaler and his team could quickly identify it as the right bronchial tree based solely on the number of branches and their alignment.

“We were astonished,” Wieselthaler told The Atlantic. “It’s a curiosity you can’t imagine—I mean, this is very, very, very rare.”

Truly a medical rarity, as are most of the photos included in The Journal’s photo series, and we’re just warning you now—if you get at all queasy or uneasy looking at blood, deformities, or something that probably shouldn’t be in the place that it is now, do not click. Don’t say we didn’t warn you.

A 36-year-old man was admitted to the ICU with an acute exacerbation of chronic #heartfailure. After a ventricular assist device was placed & anticoagulation therapy initiated, hemoptysis developed, and he expectorated a cast of the right bronchial tree. https://t.co/QfqeqwWzXt pic.twitter.com/nXW201rjCT