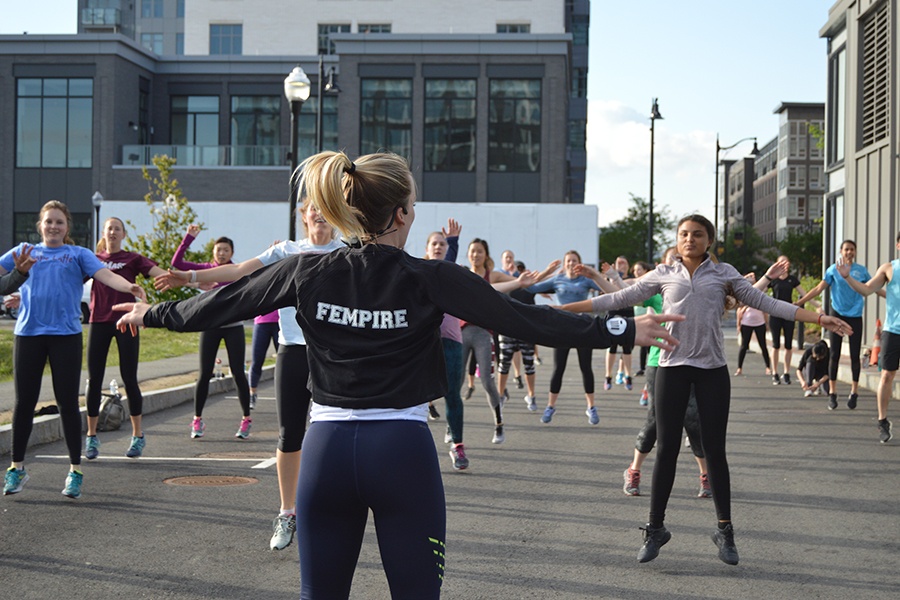 As if you needed another reason to look forward to warmer weather, Somerville’s Assembly Row is commemorating their fifth anniversary with a packed lineup of events throughout the summer, offering everything from a silent disco to their signature Fit Row Sweat Series.

Anyone looking to shift their workout outdoors after months of going stir-crazy in the gym can get moving with a number of free, active events. Looking to find your zen? Check out yoga on the Mystic River every Saturday morning. Hoping to spice up your fitness routine? Pop into a salsa lesson or an evening of Latin dancing to get your heart rate up. Searching for a new go-to workout class? Register for a free class with one of Fit Row’s five participating boutique studios as part of the fitness hub’s Sweat Series on select Thursday’s.

And workouts aren’t all that Assembly Row has to offer this season. You can bring along the kids for a movie in the park, or stop by the new pop-up arts and community space, Vox Pop, for Children Story Times and educational workshops. In June, you can check out Assembly Row’s first-ever Pride Month celebrations, which will feature a banner unveiling ceremony, a silent disco, and a screening of the coming-of-age film Love, Simon.

“Assembly Row has worked for five plus years to create a variety of events to draw residents, visitors, neighbors and office workers,” David Middleton, Assembly Row general manager, said in a press release. “Our anniversary is a perfect way to celebrate our connections to events, partners and opportunities that create a sense of community, fun and energy every day of the week.”

Here’s what to expect:

June 14: Dancing on the Row Kick Off.