The Heroes Who Don’t Wear Uniforms

The Boston-based nonprofit Home Base is helping women who have lost their military partners to suicide, but funding is running out. 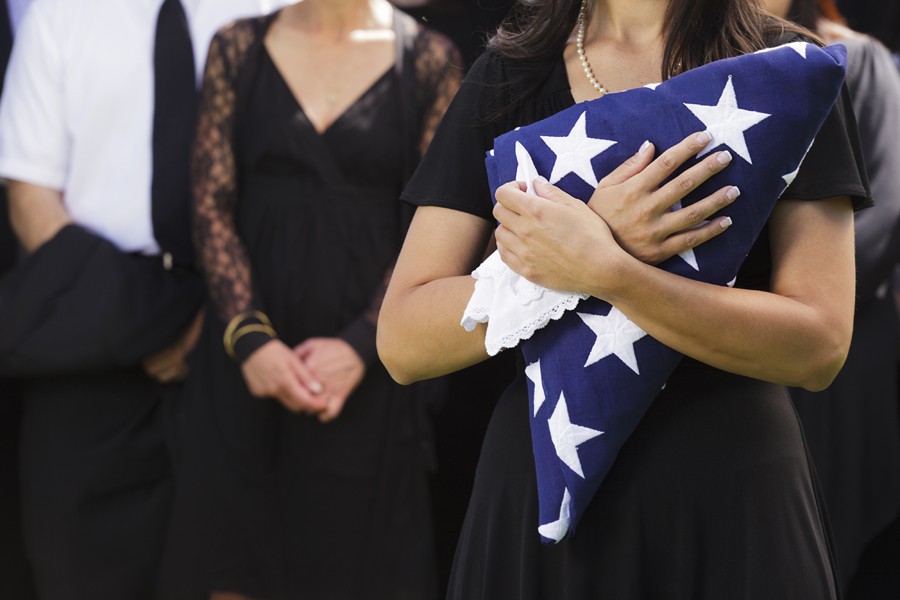 When Kim Ruocco heard her husband, Major John Ruocco, had been too depressed to watch his team in the 2005 Super Bowl with his buddies, she knew he was in danger.

John was an attack helicopter pilot in the Marine Corps who’d flown 75 combat missions in Iraq. But when he returned to the United States after a Middle East deployment in November 2004, things didn’t go according to plan. He’d been training to become a commercial airline pilot, but his job application was rejected. Making matter worse, his Pennsylvania-based unit was moved to California, forcing him to leave behind his family in Newbury, Massachusetts, where they’d just bought a home.

Kim knew that John had suffered bouts of depression before and hadn’t fully processed the stress of combat. She also recognized he was scared that if he asked for behavioral help, he might not be called to serve again, which to a Marine felt like letting everyone down. Shortly after learning he was too depressed to get out of bed and watch the Super Bowl, she called him.

“I said, ‘Are you feeling so badly that you’re thinking about suicide? Is that coming into your brain?’” Kim explained this week on my podcast, Empowered Health by Emily Kumler. “And he said to me, ‘I would never do that to you and the boys.’”

Before Kim hung up, she made John promise he’d get help, but something inside her didn’t trust that he would, so she jumped on a plane to California. When she showed up, though, it was too late: John had already ended his life. As swarms of police officers buzzed about, Kim’s thoughts turned to their two boys, who were eight and 10 years old at the time. “It felt like our family had burnt to the ground,” she said.

The Ruoccos are hardly alone in their suffering. Every hour an American veteran commits suicide. For each of them there is a partner, parents, children, and friends left trying to process what happened to their loved one.

That’s where Kim has started to make a difference. After a local grief counseling group helped her feel a little less alone, she began working for the Tragedy Assistant Program for Survivors, a program that assists military families of the fallen. She enjoyed helping others, but found the program to be lacking in one area: It wasn’t dealing with the trauma experienced by women who had lost a military partner to suicide.

It just so happened that Kim went to Reading High School with Brigadier General Jack Hammond, the executive director of Home Base, a partnership with Mass General that helps veterans move past their post-traumatic stress and complex grief. Kim reached out to Hammond and asked if there might be a way to offer the treatment that was working so well for the veterans to these women, who are often the ones to find their loved one’s body and deal with the aftermath. He agreed to help.

They began enrolling women in a two-week intensive version of the Home Base program in June 2017, with much success: In evaluations, participants have reported greater satisfaction with their quality of life and show fewer symptoms of post-traumatic stress, complicated grief, and depression.

Bonnie Ohye, director of the initiative and an associate professor at Harvard Medical School, said the treatment focuses on giving these women permission to live their lives again.

“It’s sort of allowing them to reawaken parts of themselves that had been overcome by the loss in their grief,” she explained. It’s a process of helping them get “unstuck from their position of being profoundly absorbed in the longing and mourning process.” And bringing these women together is part of the magic. Very often they’ve never talked to anyone who has experienced what they’ve been through; that connection is healing.

The problem facing the partner program is that the funding comes exclusively from individual donors rather than from large organizations—as the Home Base treatment for veterans does—and money is running out. The program currently has waiting lists of women but only enough funding to run two more sessions.

Here’s my take: My dad and both of my grandfathers fought in wars. I was raised to respect the military and to honor those who have served. This Memorial Day, while you’re firing up your grill, I encourage you to think not only about the soldiers who have died in combat or outside of it, but also the families they’ve left behind. As a country, we have a duty to support and honor them, too.

To make a contribution to the Home Base program, go to homebase.org.