Which Leafy Green Is More Nutritious: Spinach or Kale?

And better yet, which one should I put in my smoothie? 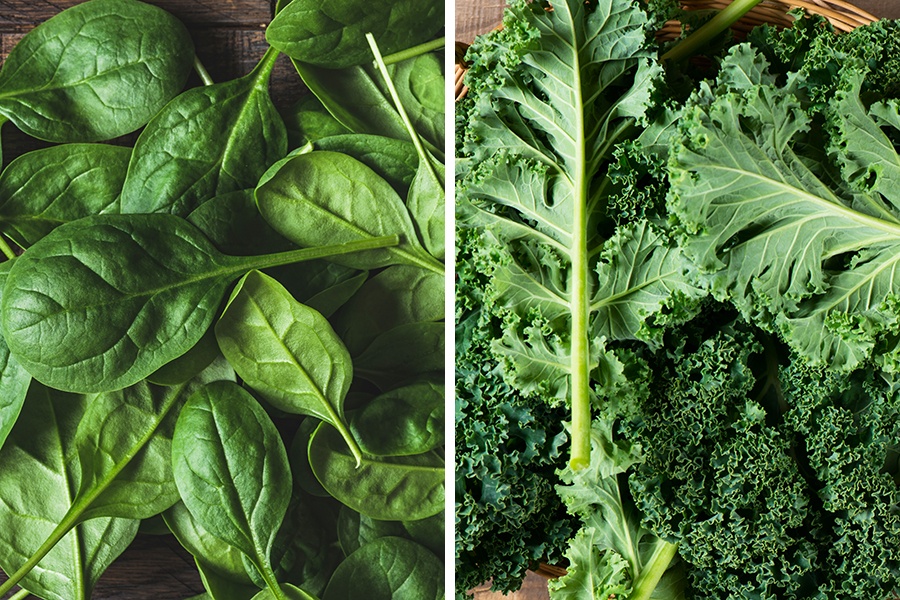 You know when you walk into Sweetgreen, and after waiting in an excessively long line, you’re asked which salad base you would prefer—spinach or kale—which one do you choose? Besides being a decision based solely on personal preference, registered dietitian Chloe Schweinshaut, founder of Riverside Nutrition based in Cambridge, says there are some differentiators between these leafy greens.

When you look at their nutritional makeup, kale has more calcium, vitamin K, and twice as much vitamin C as spinach, she explains. Spinach, however, has more iron, magnesium, potassium, zinc, folate, and vitamins A and E. “Both are highly nutritious choices overall though,” she tells me. “As they are a great source of antioxidants, which are substances that can protect your cells from free radicals causing diseases like cancer.”

So when it comes down to which one you should incorporate into a salad, or throw in your smoothie, there are some factors that could sway your decision. “Raw kale has a more bitter taste as compared with spinach and it tends to take center stage in anything you put it in.” And prep-wise, kale can take a bit more time to prepare due to having to de-stem it and massage the leaves.

She says spinach is best in smoothies because it can be easily disguised with other ingredients like fruit, yogurt, and milk. “I prefer to use spinach in the recipes I really want to get the benefits of eating the green but don’t want to overpower the flavor of the dish.”

Kale, on the other hand, Schweinshaut says is great to incorporate into soups or let marinate in salad dressing a little longer. “Baked kale chips are also a go-to in my house as they are a great way to get some greens in, and my kids love them.”

But at the end of the day the best leafy green is the one that you are actually going to eat and enjoy. With that being said, there might be a few things you don’t know about these disease-fighting veggies, and which one might benefit certain populations more than others.

Generally speaking, Schweinshaut explains that women looking to conceive might want to load up their diets with a little more spinach due to its high content of iron and folate, two nutrients essential for fertility. And for vegans, or those who don’t get a lot of calcium from dairy sources, kale is a better option because of its higher content of calcium and vitamin K for bone health.

“Those who have issues with kidney stones may be told to limit spinach as it’s high in dietary oxalates,” Schweinshaut tells me. “Which are compounds that bind to calcium and prevent absorption, leading to kidney stone formation.” And if you are on a blood thinner medication, it’s important to keep your intake of leafy greens consistent because the medication will work against the vitamin K contained in them making your blood clot more slowly.

If you’re completely burnt out on kale and spinach though (don’t blame you), Schweinshaut offers other leafy greens like microgreens, collard greens, and beet greens. She explains that microgreens are the seeds of veggies and herbs and although they’re only a couple inches tall they pack more nutrients than their mature equivalents. Collards, are much like kale and beet greens shouldn’t be wasted when you’re cooking with, or eating, beets.

“Unlike most things in your diet you really can’t get enough vegetables,” Schweinshaut says. “It’s important to eat a mix of colors and varieties to ensure that you’re getting a diverse blend of vitamins and minerals.” All of this goes without saying that it’s really just important to eat the rainbow. And no, I don’t mean Skittles or the tiny little rainbow marshmallows in Lucky Charms.