Mamava has installed one of their pods at the Derby Street Shops in Hingham, but Bostonians can also find six different locations throughout the city. 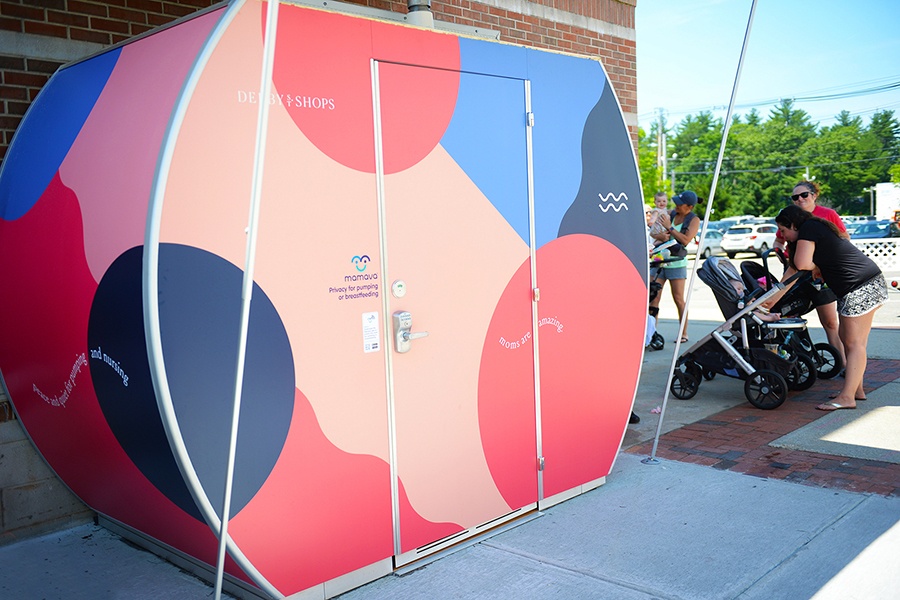 We’ve come a long way for moms in the workplace. And not just here in Massachusetts, where the Commonwealth boasts some of the country’s most breastfeeding-positive legislation after passing a 2018 law that protects breastfeeding moms, but across the nation. Lactation rooms and extra time to pump are all increasingly available to mothers, not only as a workplace benefit, but in many public spaces as well.

One of those places is the Derby Street Shops in Hingham. The outdoor shopping complex just installed a brand-new free-standing lactation suite from the Burlington, Vermont-based company Mamava.

Mamava designs and distributes free-standing lactation rooms that look like pods all over the nation. The operation began in 2013 after co-workers and friends Sascha Mayer and Christine Dodson found themselves crammed in restrooms at airports and train stations trying to pump while they traveled for work at a design studio.

“The spark came from our personal experience, and we figured our design studio could be a way to solve the problem and begin to change the cultural expectation,” Mayer tells me over the phone. “Too often women quit breastfeeding early because it becomes a hassle in the workplace.”

The company has since grown to include a fleet of over 1,000 units across the country and a mobile app that gives moms access to a network of over 3,500 other lactation rooms that have been crowd-sourced and vetted by the Mamava team and a network of moms.

The Mamava lactation spaces come in four different varieties that can be purchased and installed anywhere they’re needed. Mamava offers two different free-standing suites or pods, a smaller one and a larger wheelchair-accessible one, meant to permanently be set up inside a building. The Mamava mini offers slightly less privacy and doesn’t look as much like a pod (it more closely resembles a changing room), whereas the Mamava rental is an inflatable pod. All of the options are thoughtfully decorated and include benches, a place to plug in your pump, and proper lighting.

Mayer says they’re pleased with the Derby Street Shops, which will feature a wheelchair accessible pod outdoors, because retail is a little late to the game on this front. She says businesses often don’t take into consideration that lactation rooms are needed everywhere moms go. The more lactation rooms there are, the more freedom a new mom has in how long she can be away from home.

Mayer credits the Massachusetts Pregnant Workers Act, passed in 2018, as a “key driver” of the company’s success. It requires employers with six or more employees to provide all breastfeeding employees with reasonable break time and a space (other than a bathroom) to pump. It supersedes the federal Fair Labor Standards law, which only protects hourly breastfeeding employees. But she also credits socially active millennial moms for pushing for change, whether via legislation or activist movements like Time’s Up.

“They have stronger expectations for their place in society and in the workforce,” she explains.

Mamava also rates each state by “drops”—milk drops that is—with five drops being the best, to indicate how well they’re providing for breastfeeding moms. Massachusetts received three. Mamava’s gold standard, or five drops on the scale, would require a state to protect all working breastfeeding mothers, identify standards for lactation spaces (like access to a refrigerator), and create additional state legislation that protects specific populations and mandates lactation accommodations for specific locations. Based on Mamava’s standards, Massachusetts ranks middle of the pack. No state has received the coveted five drops—the closest ones, with four, are New York, Illinois, and California.

Looks like we’ve got some work to do, but we’re already off to a pretty good start. In Boston you can find six Mamava locations, including two at Logan Airport and one at Fenway. On top of that, other companies like Inspired Start are working with corporations such as Reebok to provide similar amenities, while the MIT Make the Breast Pump Not Suck Hackathon has socialized the entire experience. Soon, it won’t be a matter of if a company or workplace offers a lactation room, but how luxurious the rooms and offerings are.