The indoor rowing and strength training studio will open its fifth location in Amesbury on September 21. Founder and owner, Elise Caira is expecting more than just a surge in business though—she's also expecting a very special addition to her personal Fixx fam. 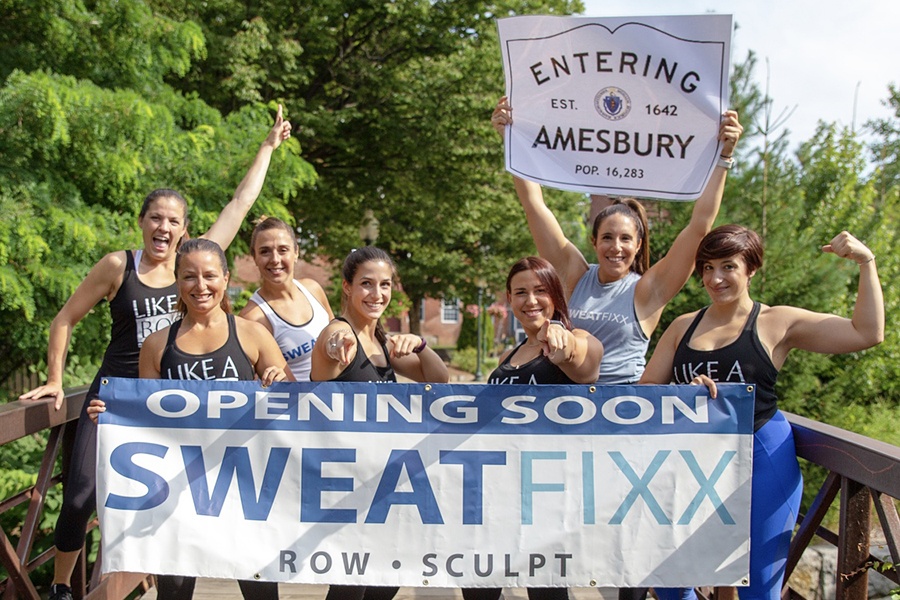 When Elise Caira says she’s psycho, you better believe her. It’s an adjective the owner and founder of the indoor rowing and strength training fitness concept Sweat Fixx fondly uses to make light of her aggressive nature. And rightfully so, she has opened not one but two fitness studios in the past year, and she’s opening one more later this fall. Oh yeah, and she’s 13-weeks pregnant.

“I’m not slowing down until my doctors absolutely tell me to,” she laughs over the phone. And she’s not kidding. She signed the lease for Sweat Fixx number five, coming to Amesbury on September 21, earlier today. When we spoke about it on Monday, she told me she had paint rollers waiting in her car, and as soon as she got the green light she would be heading up to the North Shore to start building out the studio. There are no doubts in my mind about where she was today.

When she opened Sweat Fixx number four in Beverly she was hands on through most of the construction, ripping up flooring and building and painting walls. She says as long as she feels good throughout her pregnancy she’s going to keep hustling to get the new studio up and running.

“It’s really a vibe thing when we look at communities for a new location,” she says. “And we want to bring this type of fitness to places that might be missing it. It’s a good thing that rowing is getting more popular and girls aren’t as afraid to lift heavier weights, but I still think more people should be picking up weights.”

All of Sweat Fixx’s class offerings have some ratio of rowing and strength training incorporated into the class and they use custom-made water rowers in all studios.

As for the new baby on the way, Caira says her and boyfriend Jay Crafts weren’t trying but they weren’t not trying either. Back in March she told me about her struggle with accepting the fact that she’s living with polycycstic kidney disease, or PKD, and due to the incurable condition, that causes cysts to grow uncontrollably on the kidneys, her window to get pregnant is small.

“I didn’t want to put any pressure on it, but I also knew, because of my condition, it had to be sooner rather than later,” she says. “I’m a high risk pregnancy, so I do have to be careful to keep my blood pressure down, but we’re wicked excited.”

Something tells me she won’t take much of a break though when the baby arrives in February. She already has potential plans to expand to North Carolina—bringing Sweat Fixx across state lines and continuing to push the growth of indoor rowing and strength training to other parts of the country.

Guest what…The fixx fam is growing in February & we couldn’t be more excited for our future little psycho.💙💗 . . . Can you tell what sex we are rooting for ?? 😏 #miniboss