EEE Risk Is Now “Critical” in Many Massachusetts Communities 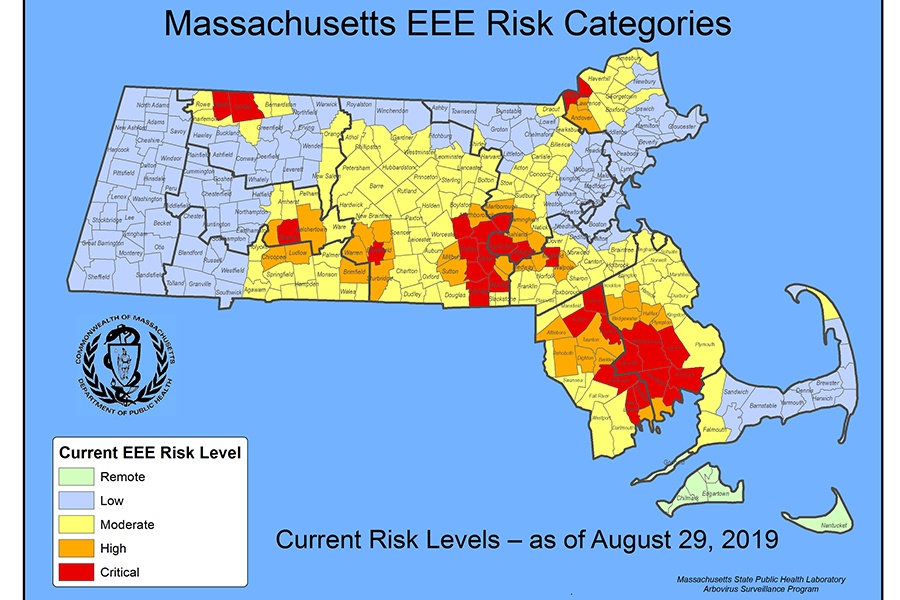 Map via Massachusetts Department of Public Health Bureau of Infectious Disease and Laboratory Sciences and the Epidemiology Program.

If you’re traveling across the state this weekend for Labor Day festivities, be sure to pack the bug spray, and consider scheduling ample indoor activities. We know it’s no way to savor the last weekend of summer, but the risk of the mosquito-borne disease Eastern equine encephalitis (EEE) just increased in several Massachusetts communities.

Yesterday, state public health officials confirmed four cases of EEE in horses from Holliston, Medfield, Brookfield, and Granby, raising the risk for those communities from “high” to “critical.” The disease is a rare, but fatal, disease spread by infected mosquitos to other animals and humans. It hits horses harder than it does humans, attacking the central nervous system of the host.

The Globe reports that as of Thursday, 191 Massachusetts communities are designated at “moderate” risk and of those, 13 are at “high” risk and 28 are at “critical” risk. According to the Department of Public Health a “critical” risk designation advises those communities to consider cancelling outdoor activities and sporting events to avoid peak mosquito hours.

Check your town’s status using this map from the Department of Public Health.

State officials told the Globe that Massachusetts is now starting a new, intense cycle of EEE activity that will likely persist for two to three years.

To protect yourself, wear long pants and long sleeves, stay indoors when mosquitos are most active, use repellent with DEET, and stay away from standing water.

For more information contact the Massachusetts Department of Public Health of Epidemiology and Immunization at 617-983-6800.