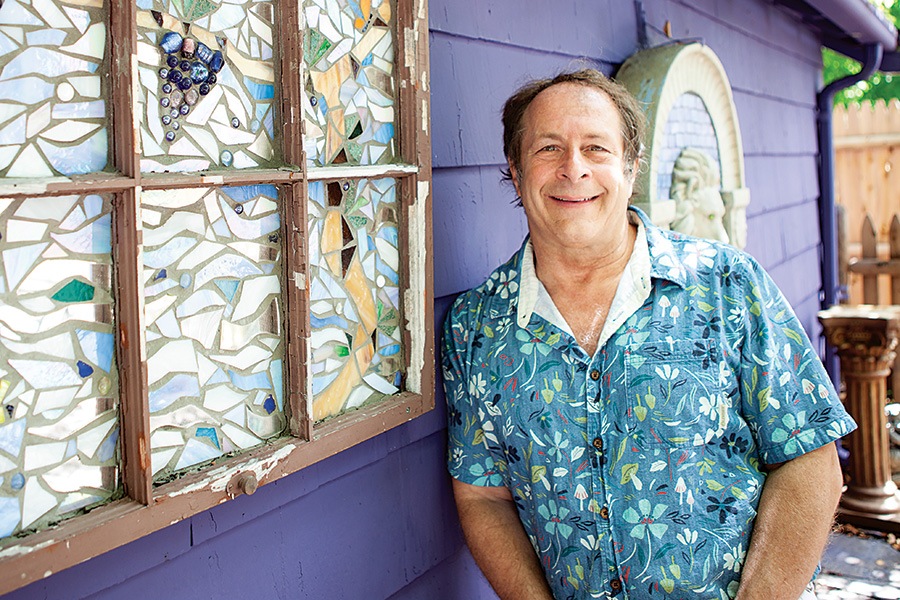 Rick Doblin has dedicated most of his adult life—and the pages of his Ph.D. dissertation at the Harvard Kennedy School of Government—to pushing for the legal, medical use of psychedelics. Now 65, the founder of the Multidisciplinary Association for Psychedelic Studies (MAPS) is closer than ever to securing FDA approval for MDMA, better known as Ecstasy or Molly, to treat PTSD. This month, as some 60 veterans in the United States, Canada, and Israel undergo MDMA-assisted therapy as part of Doblin’s Phase III trials, he sat down with me at his purple (yes, really) home in Belmont, which doubles as his office, to talk about his long, strange trip to bring party drugs into the mainstream.

Timothy Leary was doing psychological research into the benefits of psychedelics in the 1960s at Harvard. Then the feds freaked out and banned the drugs. Why do you think you have a shot at success now?

The people doing this research now want to be mainstream. During the ’60s, the researchers also wanted that, but the cultural use was all about tearing down the system. Timothy Leary was very romantically attached to the idea of being the rebel. In 1990, I asked Leary, “Based on your long experience with psychedelic research, what is your advice to us about how to try to bring back psychedelic research and make it into medicine? How do you suggest we work with the government?” He said, “I am so far past asking the government for permission for anything, but I’m glad you’re doing it.” So he’s like, Fuck the government. And we’re like, Let’s become mainstream.

Does Boston’s long history with psychedelic research have anything to do with why you are located here?

I’m here because I stayed after getting a Ph.D. at the Kennedy School of Government and because it is a great place to raise a family. But one of the things that I felt needed to happen to really, fully symbolize the renaissance of psychedelic research was to start research into psychedelics again at Harvard, which we did about 12 years ago with an MDMA study. It was crucial for me to be here to bury the ghost of Timothy Leary.

You’re focusing your energy on research studies with MDMA, as opposed to other drugs such as LSD, or even psilocybin. Why is that?

It was a result of a strategic analysis in which we had to choose which psychedelic and which patient population would be most likely to be successful from a political perspective. So we don’t really do science; we do political science. That’s what I learned at the Kennedy School. MDMA is the gentlest psychedelic, and because it is so gentle it doesn’t dissolve the ego the way other psychedelics do, so it is easier to integrate the lessons from taking it. The other issue is that we believe that therapists and psychiatrists will be more effective if they have done the drug they are giving their patients, and in general, psychiatrists and therapists are more scared of taking LSD or psilocybin than they are of MDMA. The other thing is that, of course, it has to make sense scientifically, and if you had to create the perfect drug for treating PTSD, it would be MDMA.

PTSD is a disorder of fear; MDMA reduces fear. Also, people who have trauma have learned to be suspicious, and they often don’t have trust for people because they’ve been betrayed or attacked or in some way traumatized. By stimulating the release of oxytocin, MDMA promotes what we call a therapeutic alliance. We know from psychotherapy-outcome research that the therapeutic alliance is the most important factor in whether patients get better.

After your Phase II studies, the FDA designated MDMA as a breakthrough therapy for PTSD. What did those studies show?

We conducted our studies with treatment-resistant people, people who had failed to get better either on pharmacotherapy or psychotherapy, and on average, people who had severe PTSD. We gave them a three-and-half-month intervention, with three MDMA sessions and twelve 90-minute non-drug psychotherapy sessions. With psychotherapy alone, roughly 23 percent no longer had PTSD after two months. When you add MDMA, after two sessions, it’s up over 54 percent, and after three sessions it’s 61 percent. One year after the last MDMA session, two-thirds of the people undergoing MDMA-assisted therapy no longer have PTSD.

That was pretty brilliant to work with vets. I imagine that helps your cause with conservatives?

There has been this conservative crossover. We got a pledge recently of $2.7 million from Elizabeth Koch, who is Charles Koch’s daughter, and we have gotten donations from Rebekah Mercer. We have managed to have incredibly good coverage on Fox News. We have had coverage on Breitbart, the Daily Caller, military websites, Navy Seal websites. I think the choice of working with PTSD and MDMA with a lot of veterans has been fundamental to our success. It’s insulated us from this “psychedelics, left-wing, counterculture hippies” thing that we have taken 50 years as a culture to get past.

I get that pairing MDMA with PTSD was a strategic choice, but is the idea that it will open the door to get other indications approved for MDMA, and for other psychedelics to be FDA-approved, too?

Exactly. We have an MDMA study for autistic adults with social anxiety. We’ve studied people with life-threatening illnesses who have anxiety about dying. We’re getting ready to do an eating-disorder study. There’s MDMA for alcoholism. So there will be a whole host of other indications for MDMA. Then there’s someone who wants us to help develop ayahuasca into a medicine. There’s also ibogaine, which is very important for opioid addiction. And then there’s cannabis. We just completed the first-ever study of cannabis for PTSD in veterans.

Your organization, the Multidisciplinary Association for Psychedelic Studies, has been solely focused on medical uses of psychedelics, but as we saw with marijuana, medical use led to decriminalization. Is that the ultimate goal?

The goal of MAPS has always been mental health and the use of psychedelics beyond just medicine. Particularly in young people, there are high rates of anxiety, depression, and suicide because they look out into the world and it’s kind of a despairing situation. I think we all have subclinical levels of trauma or depression just by paying attention to
the newspaper. The world is running off a cliff and we need more people to process their trauma and not be run by fears and anxieties and hatred of immigrants. It’s also a human rights issue. People have a fundamental human right to adjust their consciousness.

But isn’t the recreational use of psychedelics what got us where we are today in the first place?

I don’t use the term “recreational”—that implies hedonistic, reckless use. We say “adult use,” and our goal has always been approval for adults to use psychedelics in a licensed legalization.

Wow, are you saying there should be a psychedelic license?

Yes. I think alcohol is regulated too lightly, and the best example is drunk drivers. You get drunk drivers, they go out and they get arrested for drunk driving, they lose their license, but they keep drinking and they kill people anyway. Marijuana should not be regulated the way we are doing it right now, either. There should be a license to do drugs. Think of licensed legalization as a little bit like drivers’ education. You go to a psychedelic clinic, you learn about what it is, you get permission, you get a license, and you can go buy it. Let’s say you take LSD and you decide that you are God and you take off your clothes and you run down the street preaching to everybody and the police bust you: You lose your license.

But for now, if MDMA gets FDA approval, it won’t be a take-home drug but rather one you do with a therapist, right?

MAPS will be the only FDA-approved entity to train therapists for MDMA-assisted therapy. Once the therapists have been trained, they can set up their own clinics. There will be 10,000 clinics in America eventually.

I understand MAPS will make the MDMA. Tell me about your anti-patent strategy.

MDMA was invented in 1912, so there’s no composition-of-matter patent. But you can still get usage patents for different uses. I hired a patent attorney and said, “I want you to develop a strategy so nobody could ever patent any of the uses of MDMA.” What we do have is exclusive use of our data for five years. So if somebody wanted to market a generic, they could if they generate their own data. But it’s going to take them more than five years and $35 million or $40 million. So they’ll probably just wait this out.

How much do you think you will make during this period of exclusivity?

Somewhere in the neighborhood of $35 million worth of profit. It will be invested into more research, because there are no private gains.

Yours will be a nonprofit pharmaceutical company?

Yes. We are trying to demonstrate new ways to treat mental illness, but also new ways to market drugs. The whole American healthcare system is completely warped by the profit motive. We spend more on healthcare per person than any other country and our outcomes are way down. But that’s because you get all these profits that are being raked off.

You have been at this for more than three decades and only recently has the notion of using psychedelics for mental health become much more mainstream. How does that finally feel?

I’m in a perpetual state of astonishment at people who were against this in the past and are now open-minded to it. One of the best examples is what happened to Michael Mithoefer, our lead psychiatrist at MAPS. In 2004, we got FDA and DEA permission for our first U.S.-based MDMA PTSD study, and Michael was at the Medical University of South Carolina. And when the approval came in, the school freaked out. They said you’re either going to have to give up the study or give up your appointment here. So Michael said, I’m sticking with the study. Now it’s 15 years later, and just in July he got an email from the Medical University, asking for his advice on setting up a world-class psychedelic research center there. They said, “You were far ahead of your time.”

What does MDMA do for people in the general population, other than make them all like the same electronic music?

Well, that’s cultural, and it’s a generalization that’s not actually true. But in the general population, it reduces people’s fears and anxieties and it promotes oxytocin connections. So it’s great for couples therapy. It helps you talk about awkward or difficult things, helps you to communicate. Adult use can be very spiritual; you can feel connections, people are better listeners. We are hoping that it will be useful in psychedelic reconciliation projects like in the Middle East. It helps you accept yourself in all of your imperfections. It’s a big part of self-love and self-acceptance.

Burning Man is great, but where’s the best place in Boston to have a psychedelic experience?

[Laughs.] The best place is in our legal research center.

Right. But for adult use, where would you recommend?

Well, see, I don’t recommend. People should make their own choices. The government is recommending against it, and I don’t want to be recommending for it.

I do see you like to be on the straight and narrow, and I bet that’s why you have gotten so far with the government. But can you just suggest one fun location?

So, for an illegal psychedelic experience…hmm…for historical reasons, I would say BU’s Marsh Chapel because that’s where the Good Friday experiment with Timothy Leary took place in 1962. Then Fenway Park would be pretty funny, but it’s better to be more in nature. So, I would say Walden Pond. But if you’re going to go swimming, have somebody watch over you.