Megan Rapinoe at the Mass Conference for Women: “F—k the System”

In front of a packed house at the Boston Convention Center, the U.S. Women's National Team star and activist did what she does best: Speaking her truth. 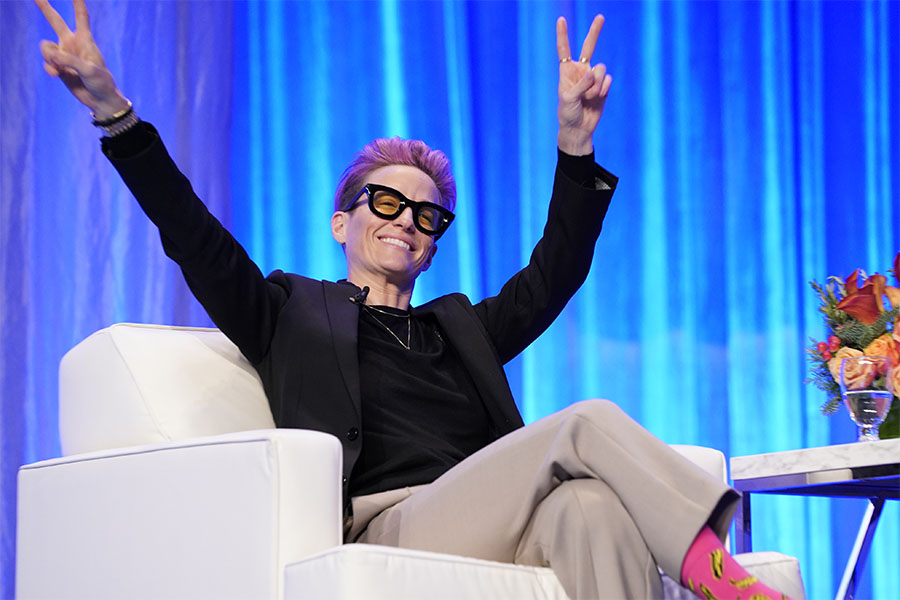 For as fiery and unreserved as Megan Rapinoe is on the soccer field, in person, her presence is calming, down to earth, and comforting.

The U.S. Women’s National team star and activist made a special trip to Boston yesterday as the keynote speaker for the Massachusetts Conference for Women.

The conference attracts over 10,000 people around the country and provides an opportunity for networking, business development, and more. Other speakers featured this year included Dr. Brené Brown, Simon Sinek, and Malala Yousafzai, among others.

In front of a packed house, Rapinoe strutted out on stage and delivered a short speech. She started by asking if it was okay to cuss (she’s known for throwing around F-bombs), then launched right in.

“We’ll never be enough in this structure,” she told the crowd of mostly women. “Fuck the system. Fuck that. We have to build our own system and our own structure. We need to design something to include everyone. We do all these things to fit in, but the bounce back that we actually need is each other.”

She encouraged everyone to put on that “Dr. Blasey Ford blazer and your Hillary Clinton pantsuit” and get out there. “Those are the patchworks and fabrics we need to go out and change the world. The system wasn’t designed for us.”

At that point, she was joined by journalist Kara Swisher onstage, and they discussed Rapinoe’s recent meeting with Washington state senators to discuss equal pay in the whole country, Rapinoe’s new non-binary clothing line, and her refusal of an invite to the White House, among other banter. Swisher also asked her if she plans to run for office.

“Contrary to popular belief, we actually need someone qualified to run,” she said. “So, no.” They both laughed and Swisher asked who her favorite candidate is right now.

Without hesitation, she said Elizabeth Warren. “Her overall look just says ‘I don’t care what anyone thinks, and I’m not trying to be a certain way.’ She’s very much her. That’s what we need.”

She left the crowd with one final reminder: “You are more impactful than you think. Force multiplies with each other and there are more stories out there. We have more power than we realize.”

Prior to the event, Rapinoe sat down with us to discuss how she’s feeling after such a whirlwind year, winning Sports Illustrated Sportsperson of the Year, and how she remains hopeful during such polarizing times.

I’ve been on fumes since July. I’m done for the rest of the year after today. At the same time, it’s been oddly giving. I feel so filled up by different people that I meet and the different events I attend. I have to remind myself how special it is to have these opportunities that I have.

You talk a lot about having privilege. How do you check that privilege to ensure your message is being heard?

First, it’s about understanding my privilege and then talking about it. I don’t think it’s wrong to say that I am all of these things because sometimes you don’t have control, but you can’t try to break down the very system you’re benefiting from without addressing it.

When you received the Sportsperson of the Year award, you called out Sports Illustrated for not being diverse enough. Can you elaborate?

You have to look at who is running the business. Who is writing the stories. There are no national writers of color. Few women in leadership. And we’re basically asking them to report on sports in America coming from a very limited perspective. We need different writers.

How do you manage to stay so light during such heavy times?

I have really great people in my life. They’re able to pick me up when I’m feeling down or bring me back down when I’m too high. I’m also not alone. This is Colin Kaepernick, this is #MeToo, this is my team. There are so many other people, and the matter might culminate with one person, but I didn’t do this all myself. I don’t want to do it all myself.