For Women, the Month You’re Born in May Affect the Possibility of Getting Heart Disease

Researchers at Brigham and Women's Hospital followed more than 100,000 nurses to evaluate the correlation between birth month and cardiovascular disease. 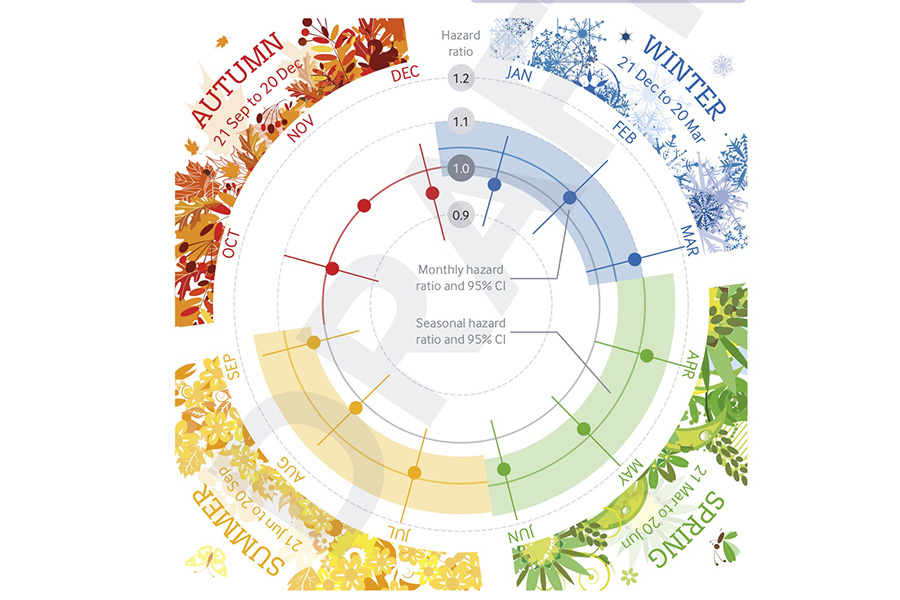 Infographic via the BMJ

Have you ever read your horoscope and wondered how in the world it could be so darn accurate? Yeah, same. It may be a little far-fetched, but sometimes it rings true. But the month you’re born in may have more affect on your fate than you realized, according to a new study released today in The British Medical Journal‘s holiday issue. The findings are kind of like your horoscope, though: Fun to read, but don’t read too much into it.

The study found that women born during the spring and summer were at higher risk of developing heart disease later in life. Those most at risk are babies born in April. Researchers from Brigham and Women’s Hospital looked at data that had been gathered in a cohort study started in the early 1970s. Nearly 122,000 female registered nurses between the ages of 30-55 years old took part in the surveys. All participants were asked to fill out a self-administered questionnaire answering questions about lifestyle characteristics and medical history. They were asked to follow-up every two years, and the Brigham researchers were able to discern a pattern following birth month.

Francine Grodstein, Brigham and Women’s Hospital investigator and corresponding author of the study, tells me this holiday issue of the journal is meant to be a little fun. And while these findings do have scientific value, they aren’t meant to be taken too seriously. “It’s not like we’re going to ask women to start timing their pregnancies,” she says. “But it does lead to some hypothesis around fetal origins of disease. The findings are more general and theoretical.”

After adjusting for things like race, body mass index, smoking status, physical activity, and other characteristics, the researchers found that those women born from March to July had a higher mortality rate from heart disease compared to those born in November. Women born in December had the lowest rate of death.

Grodstein says those born in the spring and summer may be more prone to disease due to things like seasonal fluctuations, exposure to sunlight, air temperature, and climate changes, since the pregnancy took place during the winter. It sort of checks out when you think about it, scientifically speaking.

As expected, there were limitations to the study, especially as it relates to the representation of minority groups and those outside the healthcare field. Basically, Grodstein says not to be concerned if you were born in the wrong month. The researchers warn that the findings should be interpreted cautiously. Maybe about as cautiously as your horoscope when Mercury is in retrograde. As an April-born baby, I digress.