Say so long to Spinning: Why indoor rowing is poised to overtake cycling as Boston’s biggest boutique fitness craze. 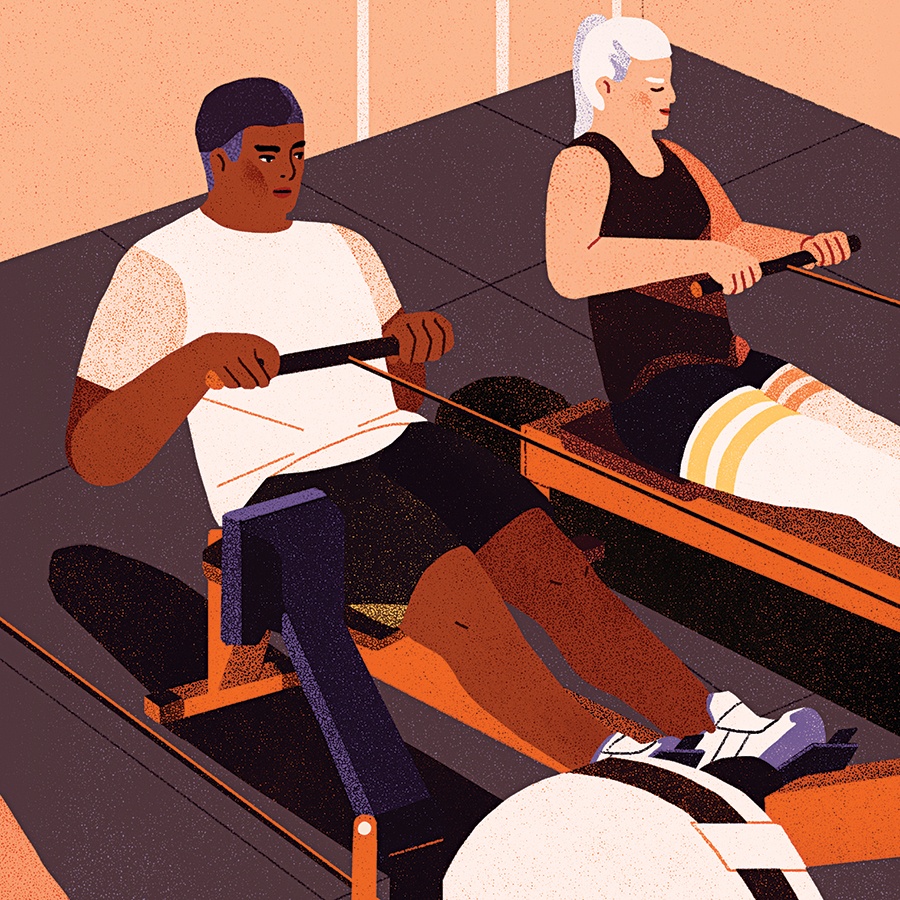 “Legs, core, arms. Legs, core, arms. Legs, core, arms.” I repeated the mantra from my instructor over and over as I pushed my heels into the platform of Row Republic’s fancy indoor rowing machine and pulled back on the handle with my arms, willing myself to take the next stroke under the glow of calming blue lights. My throat burned and sweat dripped off the tip of my nose. I’ve had the pleasure of sculling on the Charles before, but indoor rowing, Boston’s latest studio fitness trend, was harder—and much more exhilarating—than I expected.

In a city that’s home to the Head of the Charles Regatta and several prestigious university programs, the swift rise of indoor rowing studios, where just about anyone can row without the inconvenience of heavy crew boats, long oars, and unpredictable weather, perhaps isn’t surprising. It started a few years ago, when Brookline’s Power Rowing began offering a year-round alternative to the sport, and the fitness chain Orangetheory brought in rowers to complement its strength-training and running circuits. Pretty soon you couldn’t throw an oar without running into an indoor rowing class. Today, there are whispers among industry pros that the trend could soon surpass cycling as the most in-demand boutique workout, with dozens of Boston studios, from Sweat Fixx in Southie to the recently opened Row House on Lovejoy Wharf, now offering it.

Yet when I first considered taking an indoor rowing class, I was a little skeptical: How could 50 minutes on a cumbersome erg machine be anything but miserable? But if you break it down, it’s actually quite genius. Rowing is one of the most efficient workouts there is. In just one stroke, if done properly, you use almost 85 percent of your muscles, and you burn upward of 200 calories in just 30 minutes. And because it’s so low-impact, it’s ideal for those who love boutique fitness classes but can’t handle hard-core, boot-camp-style workouts.

Another benefit of rowing indoors: Being on dry land gives instructors the opportunity to make the training even more dynamic. During my session at Row Republic in the North End, we rotated between sprints on the rowing machines and fast-paced strength-training circuits (squats, single-leg deadlifts, pushups) for a workout that truly covered all the bases. The best part? I didn’t have to brave the icy-cold Charles to get it.