The Planet Fitness CEO on disrupting the wellness industry, running his first marathon, and his biggest pet peeve at the gym. 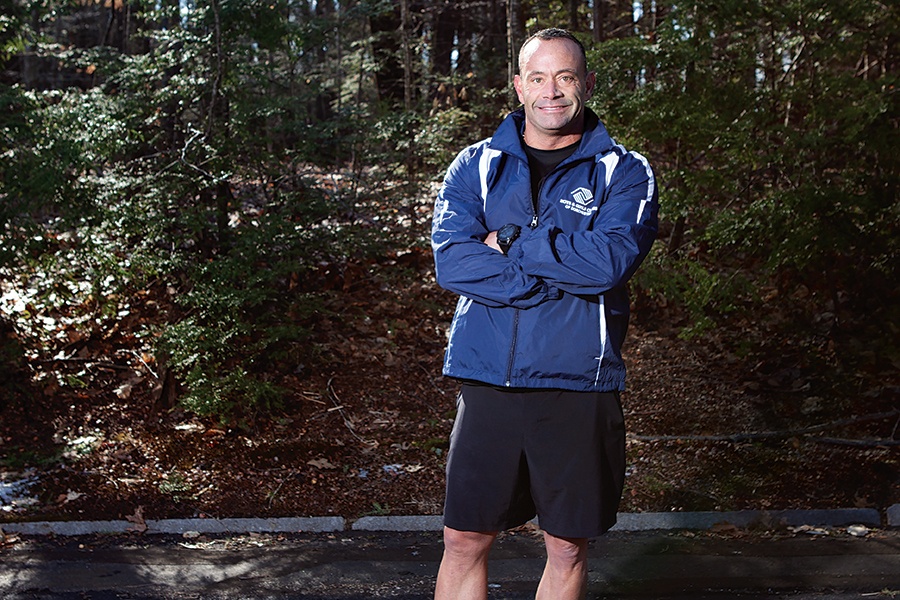 Chris Rondeau takes a break from training near his company’s headquarters in Hampton, New Hampshire. / Photo by Mona Miri

Way back in 1993, Chris Rondeau was a fresh face at a newly founded budget gym called Planet Fitness, where he manned the front desk and wiped up sweat in hopes of making it to the training floor. Nearly 30 years later, the onetime mop jockey has ascended to top dog in the C-suite, where he’s spent the past seven years at the helm. But forget about running New England’s largest chain of fitness centers, with a market cap of nearly $6 billion. This month the notably buff CEO is staring down what might be his toughest challenge yet: running his first-ever Boston Marathon. In between 20-mile training runs, we caught up with Rondeau at his corporate headquarters in Hampton, New Hampshire, to talk about why any sane person would volunteer to run 26.2 miles in April.

Why run a marathon now?

I was never really a runner. I was more of an indoor-exercise person, weight training, et cetera. I just never thought my body could do a whole marathon, but the opportunity to run for the Boys & Girls Clubs was impossible to pass up. The Boston Marathon was kind of a bucket-list thing for me. Quite frankly, it’s amazing what the human body can do when you really set your mind to it.

Is there a personal connection to the Boys & Girls Clubs, which you’re raising money for?

In 2016, we launched our relationship with them, really on the heels of our gyms’ “Judgement Free Zone” slogan. Our atmosphere and our attitude are “Come and be accepted and respected, regardless of your fitness level.” So it was a way to bring that outside our four walls and to help kids with bullying, which is really a big issue these days. I’m a father of two kids myself, and the Boys & Girls Club affiliation allows us to help kids. It’s really a perfect cause for me.

You do realize that there’s nothing good for you about running 26.2 miles, right?

Yeah, especially with my body type. I’m not light. I don’t have the typical physique of a runner. I’m like a herd of turtles coming down the road.

Right now the longer runs are up in the mid-teens to 20 miles. I run three or four days a week, and my long runs are generally on Saturday, because I work during the week and it’s time consuming.

Speaking of which: How do you train for a marathon while being the CEO of a large corporation?

It’s definitely tough, especially in the Northeast, because the sun doesn’t come up until later, so you’re training in the pitch black with your headlamp on and more reflectors than a car has. On really cold days, luckily, I have access to a lot of treadmills. But it really is a chore.

Any tips for people who want to try it?

This is my first one, so I’m still a novice. But I did hire a coach. There’s so much stuff you can read online, but it’s hard to tell what methods are right.

What are you most apprehensive about now?

I hope I don’t get hurt between now and the marathon. If you’d asked me a month ago, I probably would have said, “I just hope I can finish.” Now, I’m actually getting excited. I’m like, Gee, maybe I can do a heck of a lot better than I thought.

What will you do the night before?

Take it easy and get as much sleep as possible.

How about the night after?

Probably the opposite. But it will be a relief, because it’s really as much mental as it is physical. The Boys & Girls Clubs have also invited me and the other five members of our team to a big thank-you event the day after.

Why are many Americans reluctant to embrace fitness?

I think with fitness, in general, it can be time consuming, and fitting it into a busy life, whether you’re a CEO or raising a family, can be tough. It’s a commitment, and I think it’s important.

I work out three times a week or so. It’s plenty.

In the business world, do you see yourself as a disrupter?

Absolutely. We’ve made fitness super affordable. Our memberships start at $10 a month. We pioneered the low-cost segment of this industry.

How do you keep the price so low and maintain the quality of the experience?

We’ve been at it since the ’90s, and it’s taken a lot of trial and error. But we don’t have a lot of stuff that drives expenses, like pools or basketball courts. We have tons of cardiovascular and strength training equipment, and we keep it super clean.

What attracts your customers?

Our price point, and the Judgement Free Zone. They allow people to come in and feel comfortable. We’re the opposite of those gyms where people say they have to get in shape before they join. 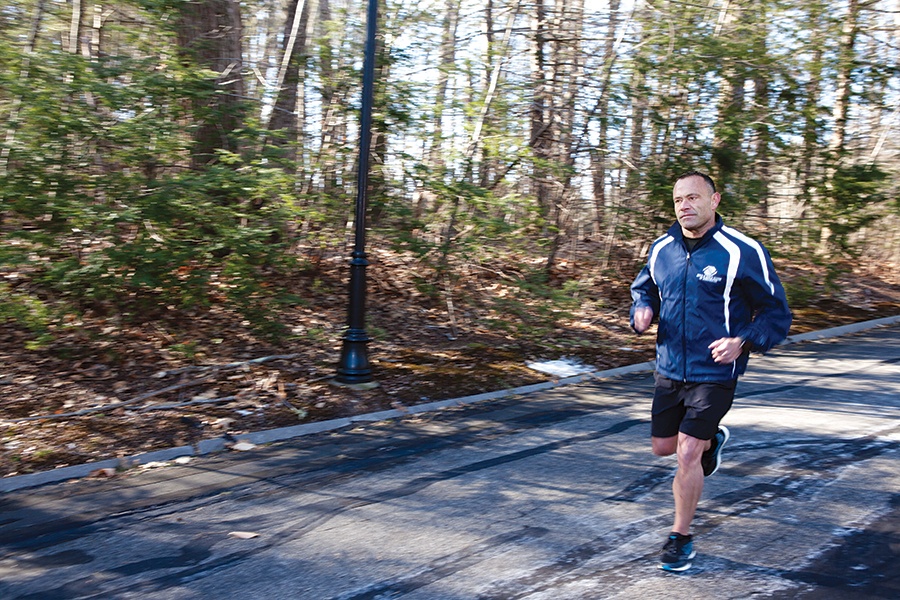 What’s the biggest obstacle to getting people to go to the gym?

Intimidation’s a big piece of it. No one wants to be the new kid in school, and fitness can be intimidating if you’ve never been to the gym or you haven’t been in years. With all the propaganda out there, there are a lot of fallacies about working out. People think they have to work out seven days a week and do it for an hour and a half. In reality, once a week is better than nothing.

Use it or lose it?

Yeah. When people feel like they can work out once or twice a week and not be judged, that’s definitely helpful. Maybe between Thanksgiving and Christmas you can’t make it in, or your kid’s soccer league takes up all your time for a certain month, but for 10 bucks a month, we’re here when you’re ready to come back again.

Could you walk onto the floor of a gym and work as a personal trainer?

I was a trainer at one point. I started at the front desk 27 years ago. I’ve got a mop and bucket in my office that I used back then.

I read an article in which Planet Fitness was referred to as “un-Amazonable” because fitness can’t be bought online. Do you agree?

I do, and that’s part of our secret. I think we also give you the opportunity to be part of a community of like-minded people, with kindness and no negativity. In our gyms, you see people from all walks of life, side by side, all ethnicities, all ages, all economic backgrounds. It’s really a magical thing to see.

How is being CEO of Planet Fitness different from any other CEO job?

There are two ways to look at it. One is that I have the luxury of coming to work and truly making people’s lives better. But we’re also a franchise company, so with the 2,000 locations we have open today, I get to see the franchisees’ personal success. So I’m proud to see our members getting healthier, and I’m proud to see our franchisees making a good living.

If I made you the CEO of McDonald’s, would you perform just as well?

I don’t think so. I wouldn’t have the passion. You know, the camaraderie here, whether it’s in the office or with our franchisees, we’re all on the same wavelength. I don’t think I’d be nearly as happy.

What’s your pet peeve at the gym?

Well, I notice things that a normal customer wouldn’t. One little dust bunny, and I think the place is trash. But my biggest pet peeve is people who don’t put their weights away or clean up after themselves.

What are the cardinal rules of gym etiquette?

I’d say wipe down the equipment after you use it. Put your weights away. Be courteous to the person working out next to you. Just general good behavior.

How about fashion faux pas?

I guess the people who try to show off and could probably put more clothes on.

As a publicly traded company, have you had to deal with shareholder activism?

No. Luckily, the business is performing really well. We went public in August 2015, at an opening price of $16 a share. It’s now regularly in the $80s.

You are currently named in a lawsuit alleging harassment at Planet Fitness. I know you can’t comment on an ongoing legal matter, but do you have any thoughts on the way the #MeToo movement has affected corporate culture?

We don’t tolerate harassment of any sort, and when it comes to our corporate culture, it’s all based on kindness.

How do you think the movement for body positivity and acceptance has affected your business?

I think it’s good for us, and it’s certainly good for the world.

What unique pressures do you face as a fitness company?

When you look at all the hype out there, whether it’s Orangetheory or SoulCycle or Bar Method, there’s always a new fad. From Billy Blanks with Tae Bo to P90X to Zumba, it’s a business that chases fads. CrossFit was going to rule the world. Nobody talks about it anymore. So, for us, it’s being disciplined in who we are, and being careful not to gravitate toward the fads.

If Planet Fitness were a make of car, what would it be?

Probably a Ford or a Chevy. An everyday car that does the same thing as a Mercedes, getting you from Point A to Point B reliably, but without the cost.

How important is the physical environment? You’re all purple and yellow. Does yellow motivate people, or is purple reassuring?

I think the purple and the yellow are cheerful, but someone once said, “You can’t get intimidated by equipment that’s purple like Barney.” We don’t take ourselves too seriously. We have Tootsie Rolls on the front desk so people can have a free treat on their way out. We have pizza nights the first Monday of every month. If you’re working out, we feel that it should be okay to splurge once in a while.

At the end of the day, are you really selling health, or is it merely “Look better naked”?

We’re like the healthcare industry, but we’re being proactive, not reactive. We’re truly improving people’s lives.