Boston Sports Clubs Is Not Giving Members the Option to Cancel

The communication from one of the largest gym chains in the city has been ambiguous, to say the least.

Updated on April 2 at 3:55 p.m.: Town Sports International issued a third email on April 1, which was identical to the March 31 email but with an added paragraph telling all members to email memberhelp@tsiclubs.com if they’re interested in freezing their accounts. The letter can be found in its entirety on the Boston Sports Clubs website. Did you get the email, and were you able to cancel? Let us know.

As gyms began closing earlier this month due to the coronavirus, one of the largest fitness center chains in the city, Boston Sports Clubs, abruptly closed locations and laid off all its employees on March 17. It also left members with many questions. The biggest ones being: What is going to happen to my membership? And if the gym is closed, why am I still being charged?

Countless businesses have been affected by the shutdown. For any of the ones that run on a membership model with automatic payments, including BSC, there are some tough decisions that need to be made. So far, it appears as though other fitness studios have been handling it in a reasonable way.  When Equinox closed, the company immediately put members’ accounts on hold. Healthworks Fitness also gave clients the option to freeze their memberships, and offered incentives to keep members who were willing to take classes online for less money. At locally-owned small fitness studios such as Sweat Fixx and the Handle Bar, some clients have chosen to keep paying their monthly dues to support the future of those businesses—but members at least have the option of canceling. Boston Sports Clubs, however, appears to be doing very little, as members complain of being stuck paying for a gym they can no longer visit, whether they want to support the business or not.

According to Joe Mazzola, a former BSC trainer, BSC employees were initially told by management that client memberships would be frozen, but in the aftermath of our recent story about BSC’s layoffs and closure, Boston received many emails from members saying their account had been charged and they were not able to get in contact with the company to cancel. We’ve also reached out, on multiple occasions, to BSC’s parent company Town Sports International corporate offices in New York in an attempt to get answers but have not yet received a reply.

Meanwhile, a class-action lawsuit, filed in New York by New York City-based law firm Wigdor LLP on March 26, alleges that Town Sports has defrauded more than 600,000 members by not freezing memberships or allowing clients to cancel their memberships. There’s also an online petition circling around demanding Town Sports be held “accountable and responsible” for reimbursing all those who have attempted to cancel their membership in the month of March. It has more than 2,000 signatures.

One of the members who reached out to Boston says that after he realized the gym was closed, he was directed by a sign on the door of the gym to contact the manager of the Downtown Crossing location with questions. After multiple attempts to get ahold of the manager locally were unsuccessful, he says he was unable to get in touch with anyone at Town Sports International. The same held true for others who reached out to Boston. Another BSC client, who also asked to remain anonymous, says she was unable to contact anyone at the gym to freeze her account and even looked into whether her credit card company could block her reoccurring membership charges. They can, but she’s waiting in hopeful anticipation for BSC to freeze the membership before going through with the process and racking up fees from the credit card company.

Mike S., a member at the Government Center location, had his credit card provider refund what was charged by BSC in March and had them stop all future charges. He emailed two managers and says he didn’t even receive the emails sent out by Town Sports International. “It would be one thing to keep charging for memberships while continuing to pay your staff,” he says. “But trying to do one without the other is truly unfair and inexcusable.”

On March 26, nine days after laying off its employees, company CEO Patrick Walsh finally emailed members acknowledging that many people had reached out asking about the status of their memberships and when the gyms might be expected to reopen. Instead of canceling or freezing memberships, though, Walsh told members, “Rest assured, once we’re up and functionally running our clubs we will handle all of your concerns, including credits to your memberships, and personal training sessions.” It wasn’t exactly clear from that email whether the future credit would mean a refund, or additional months of gym access free of charge. And neither option helps members who would like to cancel right now. 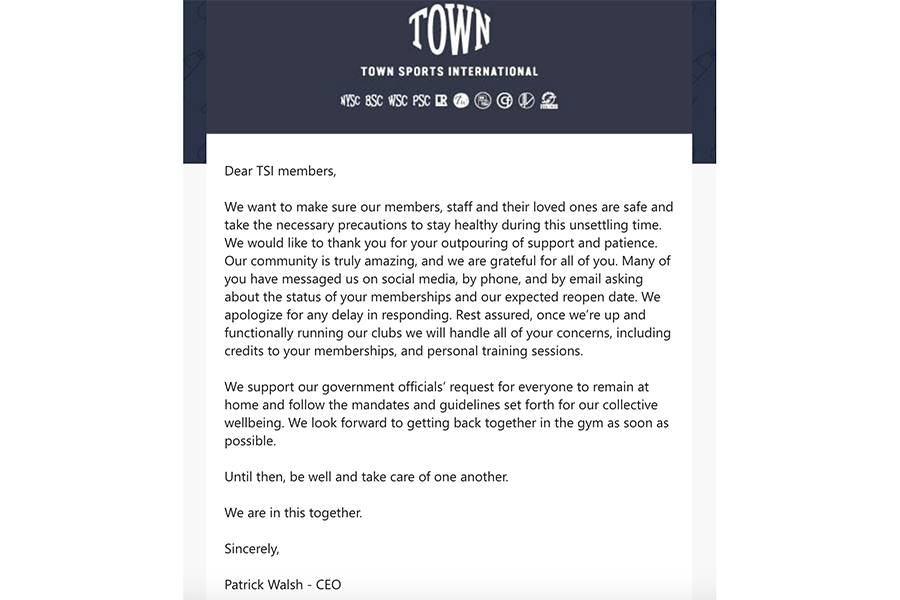 Screenshot of first email sent to BSC members on March 26

Five days later, on March 31, Walsh sent another email in an effort to once again address the volume of questions from members regarding membership dues. He reiterated the company’s decision to deal with the concerns after they re-open, adding that on April 1, clients will receive access to a free (but is it really free if they’re still paying every month?) exercise streaming service. He also said, “We will be upgrading all members that stay active during the corona crisis closure to Passport-Elite memberships through the end of 2020.” Sounds nice, but wouldn’t that include all members, since the company hasn’t provided a way for clients to cancel? 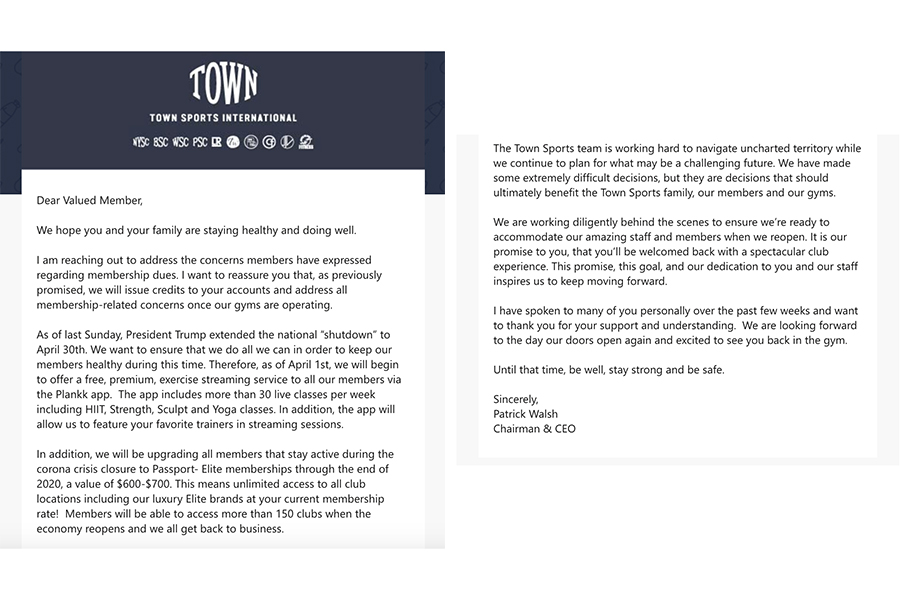 Screenshot of second email sent to BSC members on March 31

On the one hand, it’s nice to see the company’s CEO is finally being responsive. But it’s still unclear what will happen in the future. It seems unlikely that gyms will reopen anytime soon (the latest update on non-essential business closures extended the measure until May 4), so it’s anyone’s guess how long BSC will continue to charge people on a monthly basis, considering none of the communications from Walsh have indicated that a membership hold is imminent.

During these unprecedented days, we all have sympathy for businesses struggling to stay afloat. But it’s very noticeable which ones are reaching out to ask their clients for help, and which are just taking it.