Experts usually advise cutting back on screen time. But when screens are your only chance for social interaction, is it possible to use them too much...or too little? 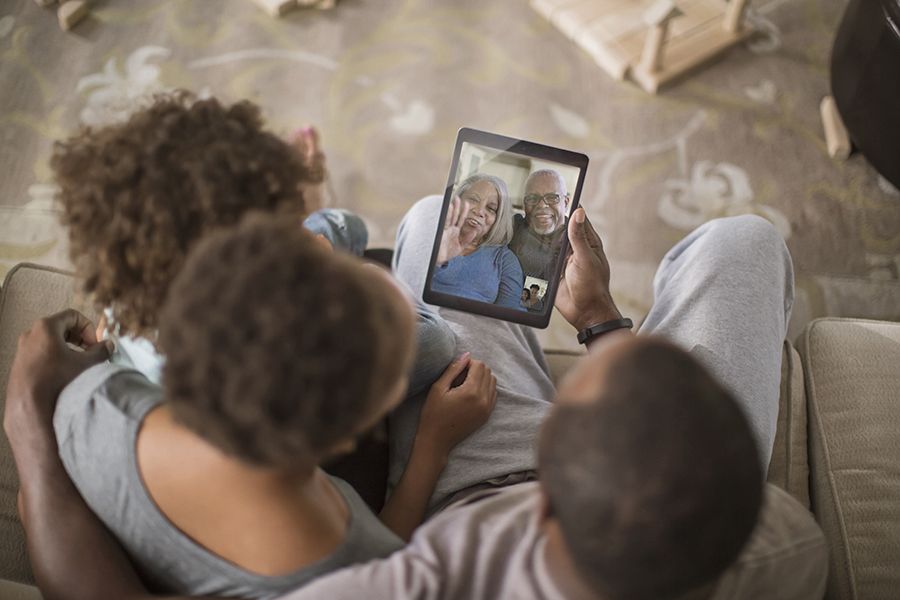 By the third week of isolation, I had mastered Slack calls, group Facetimed for the first time, and logged into my fair share of Zoom workout classes—something I definitely had never done pre-quarantine.

One Zoom class in particular really got me thinking about how cool technology is right now. Normally a tech curmudgeon—I know, kind of strange for someone who spends the better part of her days on the Internet—I was starting to appreciate screen time. And after logging into a yoga class hosted by my sister in the company of four other family members from across the country, I was even starting to like it.

We spent an hour after the class, still on the yoga studio’s Zoom account, chit chatting and drinking coffee. I was soaking up every minute of it, wondering when, if ever, all of these people I loved so dearly would have been able to take a yoga class together and then sit around for an hour talking about the status of our sourdough starters, the last episode of Tiger King, and how many books and puzzles we’ve completed. After all, when you spend all day at home, there’s not much to update anyone on.

It got me thinking about the role technology is playing in our lives right now, and how it’s playing a major role in our relationships. While we may be isolated, it seems, to me at least, that I’ve never been more connected before. Typically we’re told to cut back on screen time, but when it becomes our only way to connect with the world around us, is there really such a thing as a limit? There certainly is when it comes to managing your upsetting news consumption, but what’s a healthy boundary when it comes to Zoom happy hours and Facetime calls?

Nancy Macias-Smith, a bilingual licensed clinical psychologist in Somerville, says it’s important to balance phone use with family, work, friendships, significant other, and time with yourself—as you would any other interaction. Obviously, a virtual connection isn’t the same as the real thing. “How do we replace a hug to a daughter?” Macias-Smith says. “We can’t. We adapt to live without it for a little while.”

Adapting doesn’t mean we have to live in complete isolation, though. Brie Shelly, a Boston-based licensed mental health counselor, says she’s found it interesting to see how social media has reverted back to the root of what platforms like Snapchat, Instagram, and Facebook were all originally created for: social connection. “It’s actually proving to be really successful at that,” she says. “It’s really fun to see people be able to spread ways of supporting doctors or connecting over a funny TikTok video.”

She says something to be wary of, however, is the comparison trap. It’s especially heightened right now as gurus and influencers spread otherwise good-intentioned messages about using this time as an opportunity to “get ahead” with your next creative project or business idea. Some of us are barely getting through this, and that’s okay. “You have to notice when those feelings of comparison come up and draw the line between what’s fun and engaging and what’s shifting your mood,” Shelly says. “We’re already in a super vulnerable and anxious mindset. You don’t want to consume things that will put you down even further.”

Some are even arguing that coronavirus has made the Internet better. Shelly says it’s comforting to see celebrities using their already large platforms to raise money for the cause or thank health care workers. It’s also comforting to see social support groups taking off via the Internet in our own backyards. We’re sharing joyful pictures, cooking in our homes in real-time with chefs, and sharing (and laughing at) funny animal videos. We might all be forced to be apart, but that doesn’t mean we can’t all collectively grieve, and cope, by way of our screens.

Friday night plans now consist of games through Houseparty or Jackbox, and birthday parties and holidays are being celebrated virtually. But Macias-Smith points out that it’s important to remember that these methods are hardly perfect. Some people don’t have access to virtual communication, and some can’t afford it. Plus, some people don’t have the privacy to connect confidentially, which can make it harder to emotionally connect with them. And it’s also vital to keep in mind that we can’t reach out or control the person on the other side of the screen. “It’s a double-edged-sword to have connection from anywhere at anytime,” she says.

As someone who recharges with ample time alone, I quickly realized the downside to how easily accessible all these connection methods make us. Committing to four virtual interactions all in one day was definitely overextending. I may have less FOMO about missing a virtual happy hour than a real one—but the FOMO is there nonetheless. Modern culture does a real good job of turning anything and everything, even a pandemic, into a status/productivity game. It’s just a matter of how much you’re willing to play.