Are Live-Streamed Workouts the Future of Boston Fitness?

Live-streamed “quarantine workouts” aren’t only a temporary way to get us moving in our living rooms—they’re an innovation that just might change Boston’s wellness industry forever. 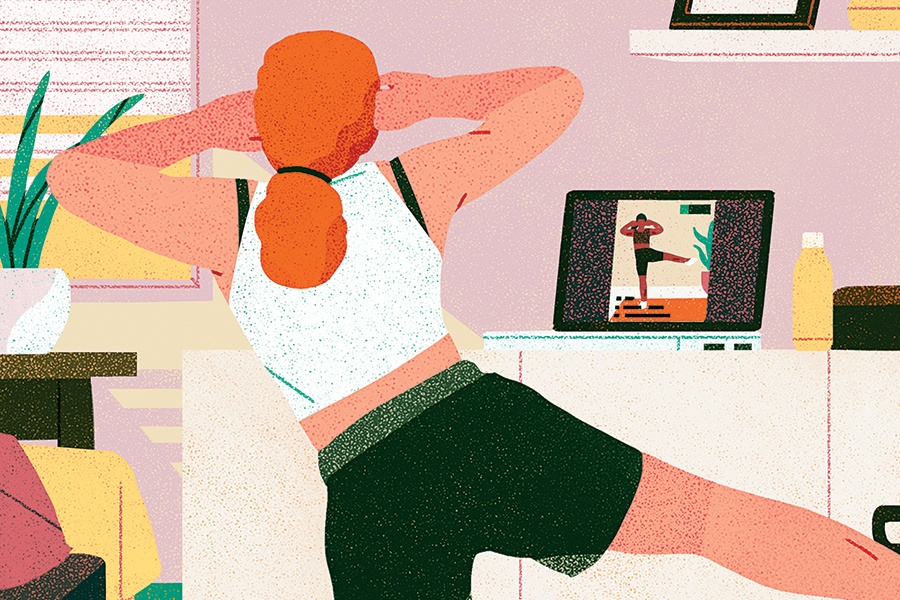 During my sixth midday jog around Jamaica Pond in seven days, on an unseasonably warm day in March, I couldn’t help but think that this is how we were supposed to live. Runners gave each other plenty of space on the sidewalks. People used trees and steps to create invigorating exercise routines. Families played. And some just sat and were still, drinking up the sun, which was dancing on the water. This was exercise, and life, during state-mandated social distancing. As the coronavirus pandemic forced gyms and fitness studios to close their doors en masse, Bostonians began opening their hearts to nature, creativity, and new ways of moving their bodies.

As it turned out, that included getting by with a little help from the Internet. While their studios sat in darkness and their incomes were suddenly halted, Boston-area personal trainers and fitness instructors quickly became the heroes we didn’t know we needed, offering hope during these unprecedented times with live-streamed yoga classes, bodyweight circuits, and dance cardio workouts. Kara Duval was one of the first local instructors to lead a Pilates class from her living room via Instagram Live—and the response from her 6,000-plus followers was astounding. “I cried multiple times throughout the day as I answered 800 messages in the hours post-class,” Duval says. “Since then, I am mind-blown by the thousands of people who are participating, messaging, and donating their time and energy to move with me. And what I want everyone to know is that as much as they say they need me…I need them just as badly.”

The chance to take classes from popular instructors whose sessions are always waitlisted—not to mention roll out a yoga mat next to your bed at 6 a.m.—has some wellness-industry insiders wondering whether this global crisis will ultimately usher in a brand-new era in local fitness, one that will open up opportunities for students and teachers alike. “It isn’t a substitute for physically being in class,” says Emily Tevald, co-owner of Boston Yoga Union. “But it’s an opportunity to enrich the community.” While most of Boston’s online classes are currently free, Tevald’s business partner, Tim Kelleher, says he can see a solid additional revenue source from live-streaming sessions once everyone is able to come back together.

For now, the great digital wellness experiment continues. At press time, at least, instructors and students alike were still forgoing Netflix binges on the couch in favor of hopping online for their fitness fix. On a Friday morning in late March, I joined Boston Yoga Union for a virtual class. Despite a few distractions from my roommates, if I closed my eyes, all that mattered was that I was on my mat and flowing with other humans. We might have been alone in our living rooms, but we were together in spirit—and that’s really what yoga, and wellness, are all about.