"What affects the most vulnerable will affect us all," Walsh says. 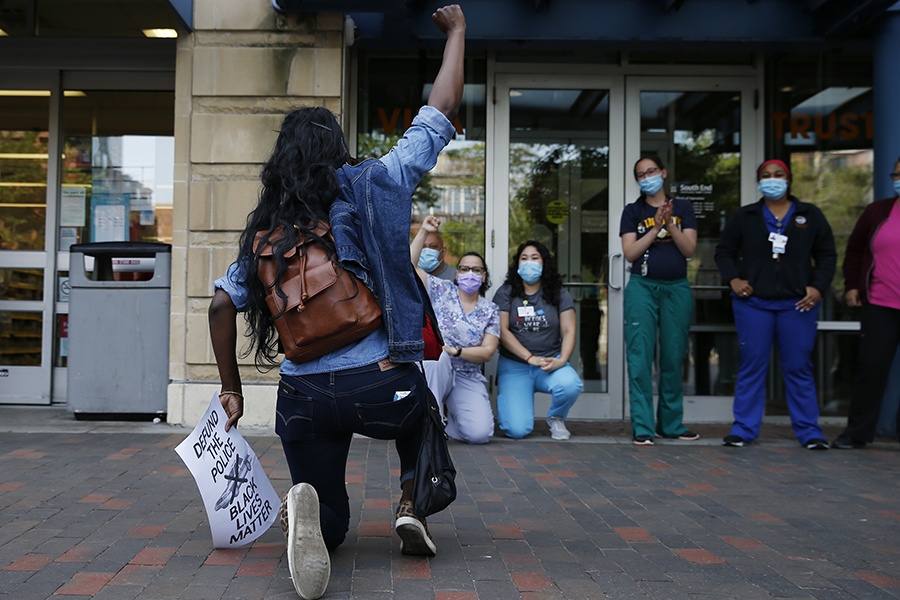 Among the demographics most affected by the coronavirus in Boston, communities of color have been hardest hit, with the Black/African American population showing the highest diagnosis rate, according to city records. Socioeconomic factors like housing, education, and job security have for a long time been consequentially connected to health. Now, more than ever, those disparities are out in plain sight due to the pandemic, and the city has announced new plans to combat them.

On June 12, Mayor Marty Walsh declared racism a public health crisis in Boston, and as a start, will transfer 20 percent of police overtime budget to social services like the Boston Public Health Commission, trauma teams and counseling services, mental health support, and more. The initiative comes after Somerville Mayor Joseph Curtatone declared systemic racism a public safety and health emergency a week prior and long after City Councilor Ricardo Arroyo urged the city to do so back in March as the pandemic first struck Boston. The move also followed significant public outcry from activists to decrease police funding.

These local public health experts share their experiences with how race affects the work they do in the area and explain why racism is just as much a public health issue as the coronavirus—and why public health officials have by and large supported the recent mass gatherings at Black Lives Matter protests.

Jarvis Chen, research scientist in the department of Social and Behavioral Sciences Department at Harvard

“There’s a long and wide literature that racism profoundly impacts human health and the research goes back many, many years,” Chen says. “COVID has marked these racial inequities in the people most affected—those people being people of color working [what we have now termed] essential jobs.” He says Black and brown people dying from COVID at staggeringly higher rates results from inequality piled on top of inequality piled on top of inequality, and that when people want to suggest a conflict between protesting for Black lives and staying safe from COVID, it’s a false dilemma: “They’re part and parcel of the same thing.”

He also cautions that what’s missing from the conversation is the voices of people in the communities being affected the most. Most often, he points out, well-meaning people want to help, but they fail to ask those communities what they actually need. After speaking to people most affected, he suggests turning to policy reforms, providing new resources to increase access to healthcare and healthy food and health education to these places, and restructuring workplaces to accommodate all workers—not just those on top of the hierarchal chain. “One thing that COVID has really shown us is that no part of our society is separated or insulated,” Chen says. “What affects the most vulnerable will affect us all.”

Marty Martinez, Chief of Mayor’s Office of Health and Human Services for the city of Boston

In a recent statement, Mayor Marty Walsh announced free COVID testing for anyone who decides to join protests in person. While public health officials are telling people to continue protesting, they’re also asking people to make sure they’re wearing protective equipment and being safe. In addition to wearing a mask, as Boston previous reported, protesters can try to maintain their distance, carry hand sanitizer, and get tested after being out among crowds to avoid passing on the virus unknowingly to people they live with or come into contact with. Martinez says the city has been suppling protesters with masks, hand sanitizer, and water as a way to help minimize COVID spread from the protests. He also says the city has been focused on the disproportionate impact the coronavirus has had on different communities, and the glaringly obvious health inequities it has exposed. “Part of those inequities are the racial injustices,” he says. “Stand up in this moment to racism and injustice. It is more important, if not more important, a problem than the virus.” In other words, it is the problem beneath the problem.

Cambridge Health Alliance is known for its work with low-income families and communities while working to reduce barriers to care. One of the ways physicians have banded together to show their support is through the collective Social Justice Coalition, started by Tan in 2016. The coalition is a place for everyone across disciplines to come together and share ideas on how to combat systemic issues, racial inequality, and economic inequalities for CHA’s patients. “It’s more of a way for us to not reinvent the wheel when we identify an issue, but work together to come to some sort of solution,” she says. The group has been at the forefront of Cambridge protests, Tan amongst them, donning their white coats as they advocate for Black lives.

Tan also mentions that in her own work she was noticing the connections between COVID and race, as well as economic status, well before the protests—as much of the country was. And she touts that as a further example of the larger issue. “I wish that we never had to deal with COVID,” she says. “But I think in some silver lining, perhaps, this is a way for us to understand these things have been brewing for a very long time, and going forward we can learn from this—not just from an infectious disease standpoint, but from a public health standpoint.”