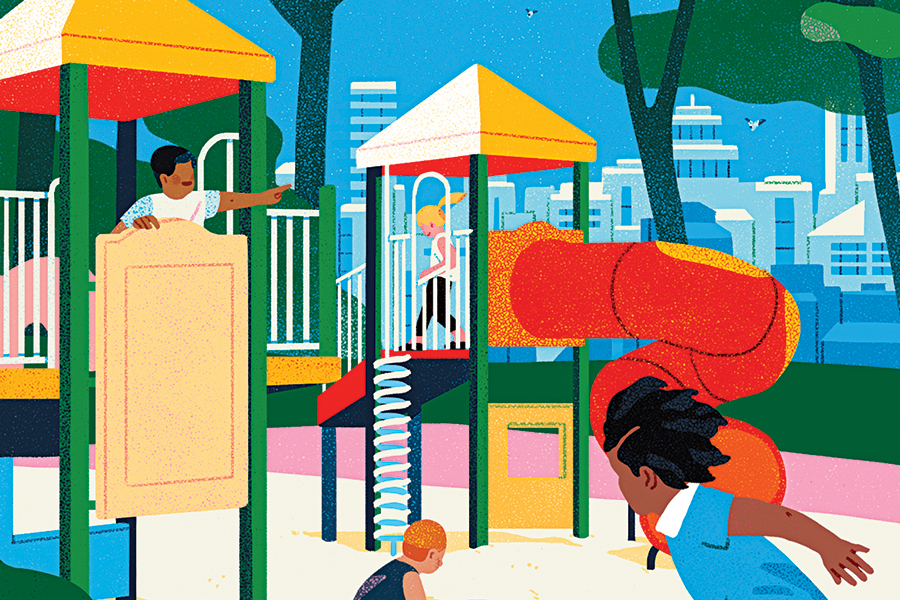 What Her Kids Like: “My 14-year-old daughter and husband have a blast racing around the baseball diamond with our 10-year-old pug,” says Edwards, who can often be found on the other end of the park leading her four-year-old son through an obstacle course.

What Mom Likes: The fun, colorful—and, most important, safe—playground equipment.

What Her Kids Like: When Mezrich’s son and daughter were younger, they loved going down the double slide together and playing on the ride-on toys that parents had donated. In fact, they spent so much time there that once, husband Ben had to trek out to the playground on a snowy evening to rescue one of their son’s beloved toys. “We will never forget that night!” she says.

What Mom Likes: “It is a short walk to both the Esplanade, where we could stroll along the Charles River, as well as Newbury Street,” Mezrich notes. “It’s also near L.A. Burdick, where we loved to sip rich hot chocolate on cold winter days.”

What His Son Likes: Chase’s son Lincoln, five, loves this park because it has a large web of ropes that he likes to climb through. “He also loves that we get a treat at Flour right after,” Chase says.

What Dad Likes: “I personally love this park because it’s a quick place to stop close to home with no sand or mulch, so Lincoln doesn’t leave dirty,” Chase says. “And I, too, love grabbing a treat at Flour.”

What Her Kids Like: Erlingsson’s children—a daughter, nine, and son, eight—enjoy the playground’s variety, which includes zip lines, swings, climbing structures, and slides.

What Mom Likes: “I enjoy the walk from Beacon Hill across the Arthur Fiedler Footbridge with the children to the Esplanade,” Erlingsson says. “The view of the Charles River is sublime and engages the senses.”

What Her Daughter Likes: “It may not technically be considered a playground, but it’s the original playground in Boston,” says Johnson, whose two-year-old daughter, Vienna, loves seeing the swan boats and the Make Way for Ducklings sculpture.

What Mom Likes: “The manicured paths, the street musicians, the people watching is enchanting for little kids and parents alike,” Johnson says. “Plus, it gives both the chance to feel separated from the bustle of the city.”