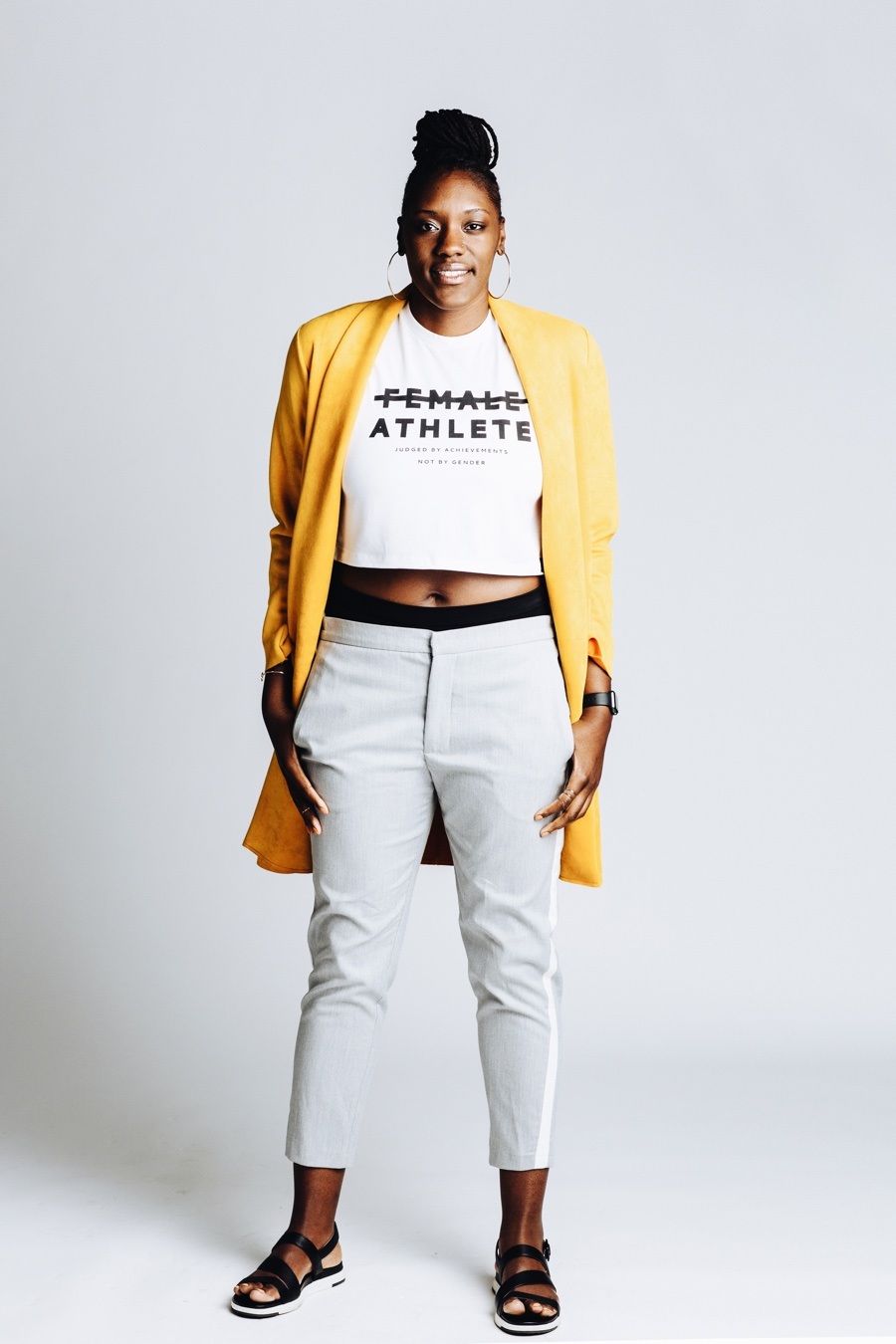 What is your brand called? Playa Society. Right now I mostly do t-shirts, and the one I’m wearing is really popular. I want to celebrate women in sports.

How did the brand come about? It’s a long story.

That’s ok! I started playing basketball when I was 15. I got into it really late, but it changed my whole life, relatively speaking.

15 is late? Yeah, everyone I played with started when they were eight, so I was way behind. I didn’t know what I was doing.

How did you get involved? In high school, my best friend wanted to try out for the team and I tried out with her. Of course I was 6’1″, so everyone wanted me to play on the team. I saw a girl play who was number one in the country at the time. She was 6’4″ and so confident, so strong and I wanted to be that girl. I played basketball all through high school, I played division one in college and then I played in England. While I was in England, I was also getting my business degree in marketing. That’s when I decided that I wanted to start my own brand. I was doing focus groups with athletes about the gender bias in sports and I wanted to start making t-shirts to combat it all.

When did the brand launch? I’ve been designing shirts for like four years, but I launched the brand at the end of January. It’s been fast moving and overwhelming.

Tell me about what you’re trying to achieve with the brand. Right now I’m trying to get t-shirts on as many people as I can. It’s crazy because so many athletes will email me and share their stories. They’ll say, “I saw your t-shirt and this was my experience as a female athlete,” and “I’m so glad you made this t-shirt, I love it so much!” That’s something that I didn’t expect to happen but I love it, it’s great.

What is the shared experience among female athletes? A lot of times they tell me that sports helped build their confidence and their character and without sports they don’t know where they would be right now. Or that when they were growing up, they always wanted to play a sport, but either there wasn’t a girls’ team, or they tried to play with the boys and were always looked down upon. There is a lot of stigma attached to playing sports as a girl and I’m just trying to support the stories, while also getting the shirts out there.

How do you hope Playa Society will help? The top three reasons why girls drop out of sports as teenagers is because of social stigma, costs, or because there is a lack of role models. I am trying to use my brand ambassador program so that people who wear my t-shirts show more representation of female athletes and combat some of the stigma associated with women in sports.

Where can people get the t-shirts? They’re online at Playa Society. I do a lot on Instagram too.  I’ve connected with WNBA players and that’s amazing because they’re women that I’ve looked up to since I was playing. Candace Parker just wore one of my t-shirts on Kevin Garnet’s t-show. I watched her when I was growing up, so it was really cool.

Did you have an interest in fashion as well when you were growing up? Yes! Before basketball I wanted to go to the Fashion Institute of Technology so bad, that was my dream. Once I started playing basketball, I forget about everything else. I fell in love with basketball and I don’t think FIT has a basketball team.

Did you want to be a designer? Yes I wanted to work with Vera Wang one day.

Did you love wedding dresses? I did! Which was so weird. My friends have no idea that’s who I was.

How would you describe your personal style now? I always say I’m either going to or coming from the gym, so I might throw something feminine on over something that looks super masculine. I like the aesthetic of men’s clothing a lot, so sometimes I wear men’s pants. These are men’s pants from Zara.

Do you have any style icons? Tracee Ellis Ross and Lauryn Hill. Anyone who is authentic and genuine like that.

Do you still play basketball? Just for fun. Sometimes, I fantasize about quitting my job and going back overseas.

Where do you play in Boston? I work at MIT, so I play there whenever I get a chance.