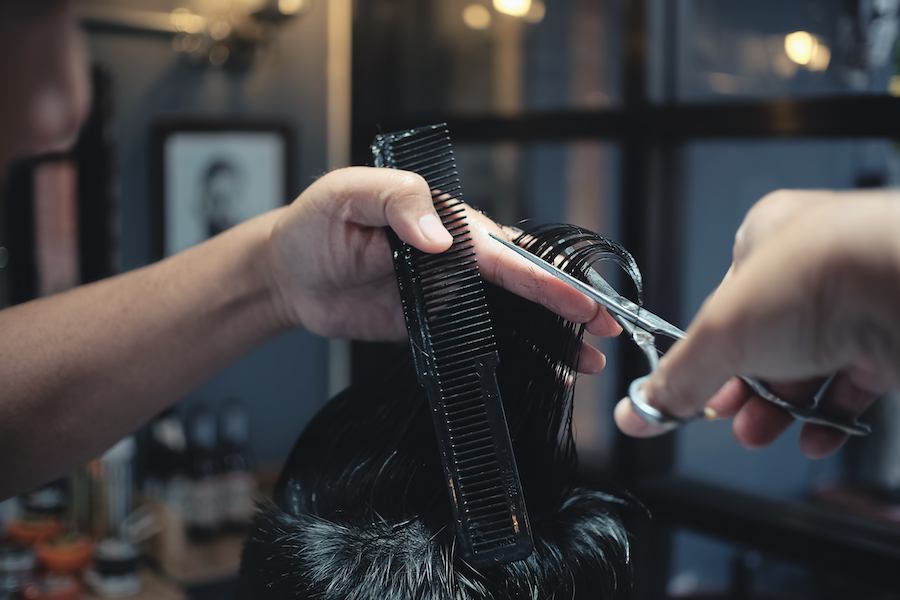 About a month into abiding by the state’s stay-at-home advisory, my boyfriend began imploring me to help him cut his hair. (Cue: my flashbacks to the mullets and lop-sided chops I gave to my once long-haired Barbie dolls as a child.) Despite my persistent attempts to reason with him and convey my sheer lack of expertise, after a few days, I gave in. When he sat down in the chair we unwisely placed in the middle of the living room, what followed would probably qualify as a near tantrum. No, not from the person about to have electric blades put to the side of his head—from me, his haircutter, who was too nervous to touch the trimmer to a single strand.

Eventually I did work up the courage, but as hair began to fall to the ground, the two of us very quickly realized this venture ain’t quite as easy as it looks when you’re in the hands of a professional. We each found ourselves with question after question about how the heck to remove hair from the male head without royally screwing up—with only an equally clueless counterpart on hand to guess at an answer. By some miracle, my boyfriend’s hair turned out halfway decent in the end (and for one, I was happy he still had some on his head at all), though I can’t say I am eager to make this a regular occurrence.

When I later spoke with Van Capizzano, owner of Tribe Barber in the South End, he reassured me: “It’s hand training that takes years and years,” he said. “When I teach someone how to cut hair, it takes six to nine months until the first day I start letting them get behind the chair and do buzzes. So don’t be hard on yourself.” Phew, well that makes me feel a little bit better. Still, if you’re like most short-haired folk, there’s a good chance you’re itching to get a trim right about now, and an even better chance that you (or your reluctant rookie barber) probably don’t exactly have six months of experience under your belts. That’s where Capizzano comes in. Read on for the advice he shared for an at-home haircut.

Before you begin, you should know…

…that the artfully unkempt look is always in.

“Try hard to look like you’re not trying,” he says. Which is good news for those of us not leaving the house much these days. “If you look at a lot of actors, models, and people in entertainment, their haircuts are generally not super neat,” he says. “It’s like when someone’s beard is too neat and then their face looks weird. I feel the same about the whole head.”

…that going for extremes is a good idea right now.

For those who are tempted to shave their heads completely every now and again, now’s your chance, Capizzano declares. “Every guy looks pretty good with a shaved head whether they have a lot of hair or not,” he adds. If you’re ready to say au revoir to those tresses, the expert generally recommends using the four guard on your clippers, which he says will give a longer buzz cut that works well for most people.

Alternatively, he adds, this is also an excellent opportunity to experiment with letting your hair grow out. The key to keeping longer hair out of your face as it lengthens is simple: Just tuck it behind your ear. “The real trick for this is taking a comb and putting it on top of your ear with the teeth of the comb pointing directly at your head, and then sliding it backwards. It’s going to drag all the hair back behind your ear,” Capizzano explains. The other secret to pulling off the style? Don’t shampoo. “I haven’t washed my hair with shampoo since I was twelve. [Shampoo] strips your hair. Your body makes that oil for a reason—to keep it supple, moist, and healthy.”

…what tools to have on hand.

Your beard trimmer does not fall under that category, Capizzano says. Instead, the barber recommends heading online and ordering a Wahl 5-Star Senior, a professional-quality clipper made for cutting the hair on your head. “Beard clippers are generally the same price, but don’t have as much strength, power, or durability,” he says. “Plus, the numbering systems are off between [different brands of beard trimmers], so one could give you something entirely different than another,” he says.

When it comes to scissors, Capizzano is a bit more lax. While he notes that realistically, Japanese-made steel shears designed for haircutting are the best ones out there, he also recognizes that they tend to cost hundreds of dollars, if not more. So if you’re planning to use scissors, whatever you have on hand will do the trick. “I go on vacation with friends and they’ll ask me to cut their hair or their kids’ hair or wife’s hair and I just go to CVS and [get scissors] there. They’ll do the job okay,” he says. “My first boss always said, ‘I don’t care what kind of scissors you use. If you’re good, you can cut with broken glass.’”

…whether you should work with wet or dry hair.

“If you’re using clippers, the hair has to be completely dry. Anything wet is hard for the razor to get through and it will ruin your clippers,” Capizzano explains. If you’re a beginner and cutting your hair with scissors and a comb or your fingers, however, the pro recommends doing it while hair is wet because it’ll be easier to work with. “Wet hair is moldable. You can stick it up, push it back, push it forward, and [you’ll] have easier cleanup and maneuverability,” he says. Just be careful to err on the side of caution and go longer rather than shorter, especially if you’re cutting when the hair is wet, he adds. Since hair is elastic, it might look shorter than you expected once it dries. And as Capizzano puts it: “You can always go shorter, but you can’t put it back on—if you haven’t figured that out yet.”

“I hear it with guys trimming their own beards all the time—they forgot to put the clip on,” Capizzano says, noting that whenever he does a fade haircut, he triple-checks the clip that he’s using between strokes. “I do it incessantly because it keeps me in the habit.”

…cut your hair with scissors.

“The rule of thumb is you want the shortest hair at your neck and around your ears, and then it gets a little longer as you go up. You want the width towards the top,” Capizzano says. With hands vertical—preparing to cut up and down rather than horizontally—and your palm facing the head, pinch hair between the tip of your index finger and your first knuckle. If you’re right-handed, he recommends starting at the left temple, combing the hair into the fingers, cutting vertically, and then moving your hand around the head a quarter inch at a time until you’ve reached the other temple. Then, go back to the right temple and position your hands a little bit higher, working over to the other side once again.

In terms of length, Capizzano says to keep in mind it’s always better to play it safe by going longer. One way to ensure this is to avoid cutting inward once you reach the widest point of your skull, called the parietal ridge. “Keep one finger on the side, and imagine it going straight up. You don’t want [the scissors] to go in from that point; only up,” he explains.

…trim your hair with clippers.

The first thing to come to terms with? You’re not going to be able to do a perfect fade. “It takes years of practice and everyone does it differently,” Capizzano says. With that expectation set, you can still get solid results with some pro tips. One key pointer: The fade should start at the parietal ridge. Using the Wahl, start with a number four guard and use that right up to the parietal ridge. Then, a half inch below where you started the first time, use the number three guard from there down, all around the head. Repeat a half inch below with the number two guard, and then the number one. At that point, you should be level with the ears, where the hair will be the shortest.

…clean up your sideburns in a flash.

Capizzano suggests taking a comb and pushing sideburn hair forward, and then cutting straight up where the sideburn hair meets the skin. Then, comb the sideburn hair back towards the ear and do the same thing on the other side. Finally, using your comb, you can go up and down the center of the sideburn to lightly trim up the hair there, too.

…tidy the back of your neck.

Capizzano’s general attitude toward this area (as well as sideburns, for that matter): “Stop hyper-focusing, this isn’t the time for that anyway,” he says. If you do feel compelled to do some maintenance there, though, it’s best to have someone help you navigate this region and  use a feather-styling or a feather-nape razor, which you can order online. “They’re serrated, so when you run it against someone’s neck or even put your thumb on it, it doesn’t cut you,” Capizzano says. But beware: “Almost everybody goes too high,” he adds.

…get a cut similar to Capizzano’s.

“Every guy comes in and they’re like, ‘I like it longer on the top and shorter on the sides,’ and I’m like, ‘So you’d like every haircut ever given?’” Capizzano says. “I don’t do that on myself.” Instead his barber, using scissors, cuts almost his entire head the same length, except for a triangle portion at the front of his head, which he likes to leave a bit longer. “It’s essentially like if my head had a buzz a long time ago, and that grew out, and then the front was just a bit longer than the rest,” he explains.

To attempt the look at home, Capizzano suggests gathering hair from the two front corners of your head, where the hair growing sideways meets the hair growing across the top, and connecting the two points about a fourth of the way back on your head so that they meet in a triangular shape. Separate this section and buzz the rest of the head with a number eight guard. If that’s too long for your liking, work down in guard size (stopping at a number five) until you’re happy with the length. Then, using scissors, sparsely trim the sectioned-off front portion until you like the look of your ‘do, keeping in mind that less is typically more.