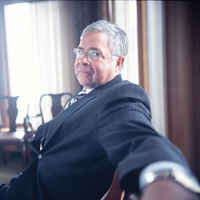 While Tom Menino is dealing with a surprising amount of fallout after his decision to oust Boston Public Library head Bernard Margolis, Gov. Deval Patrick finds himself the victor in his bid to demote UMass board chairman Stephen Tocco.

Our controversy-hungry souls are disappointed that Tocco didn’t come up with his own “I didn’t think this was Venezuela” comment for the governor, but we don’t have much time to mourn the lack of comedy. We’re too busy trying to figure out why the governor wanted him out.

Unlike the Menino-Margolis fight, both parties in the UMass struggle have kept pretty quiet.

The governor’s office declined to comment. Tocco yesterday declined to speak in detail about his decision, saying only that he wanted to avoid an escalating fight and a nasty and divisive showdown at the December meeting.

“Winner and losers don’t really matter to me,” Tocco said in a brief statement. “We need to all work together to get Massachusetts back on its feet.”

Is this diplomacy after a bitter political fight? We’ve forgotten what it’s like.

In the past, Patrick has removed as many of Mitt Romney’s appointees as often as possible to “control the authorities and other boards in order to govern effectively.” But Tocco’s presumptive replacement is fellow Romney appointee and board member Robert Manning. Patrick hasn’t explained the logic behind his decision, so we’re left to play guessing games.

The Globe surmises it’s an attempt to make sure the administration has someone who will stay in line.

Administration officials say Patrick wants to ensure that the chairman is loyal to him and in sync with his agenda as UMass tackles challenges next year that include a major capital construction campaign.

In an article in the August 2007 issue of Boston magazine, Seth Gitell predicted Tocco’s removal after he and and university president Jack Wilson were accused of violating open meeting laws. While their plan may have been a good thing for the university, their closed-door machinations did it in.

. . .Patrick will get to fill five of UMass’s 17 nonstudent trustee slots with new appointees, giving him considerable influence over the board, if not outright control. A few weeks later, the trustees are likely to vote for a new chairman. Tocco is eligible for reelection, but don’t be surprised if he is replaced by a candidate more to the governor’s liking.

. . .Patrick has already signaled that some of his $1 billion biotech stimulus package will be steered toward UMass, in part through the creation of a stem cell bank there. While the governor is at it, he’d do well to push through the consolidation that Tocco and company would now appear too tainted to pull off. Though over the near term that would mean more politics for our state university, not less, for once UMass might come out the better for it.

Let’s hope this political win for Patrick is a victory for UMass students and alumni as well.