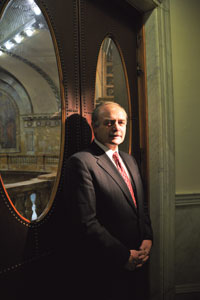 Last week was a good one for House Speaker Sal DiMasi. After some intense political maneuvering, he killed Gov. Deval Patrick’s casino legislation, and took the opportunity to crow about his victory. But now that DiMasi’s end zone dance is finished, he’s got some problems.

The biggest may be the report in today’s Globe that found a connection between DiMasi and Cognos, the software company that received a $13 million state contract after an unusually short bidding process that the Speaker was said to be deeply involved with The software company was a platinum sponsor of a DiMasi charity golf event.

Not only did the software giant donate $10,000 to the charity, but several lobbyists with business before the house also donated $3,500 each to the Officer Harold L. Vitale Memorial Golf Tournament.

Gold sponsors included Richard McDonough, a veteran lobbyist who includes Cognos as a client; Jay Cashman, a friend of DiMasi’s and major state contractor who is currently seeking legislative approval of a law that would allow him to build a wind farm on Buzzards Bay; and John Stefanini, a lobbyist for Suffolk Downs, which is looking to build a casino at the East Boston track.

Jokes about DiMasi’s golfing habits have been making the rounds for years, which doesn’t mean anything in and of itself, but it does leave the Speaker open to criticism.

If that weren’t enough, organized labor is sour with DiMasi after he overpowered the debate on the casino legislation. While representatives who voted against the bill are fine for now, labor leaders may exact their revenge during the next election.

The day of the vote, [AFL-CIO president Robert Haynes] sent hand-delivered letters to lawmakers warning that opposing casinos would have “a drastic impact on your Labor Voting Record upon which endorsements are based.”

You won this battle, Mr. Speaker, but this is just getting started.
Photo: John Goodman