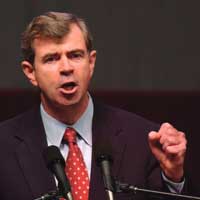 In this month’s issue of Boston magazine, we learn that you don’t want to piss off Secretary of State William Galvin, especially when it comes to the quiet of his Lake Street home. While he’s clear that he’s speaking as a private citizen, his opposition to Boston College’s expansion has been merciless.

Today, we learn that Galvin is setting his sights on Richard Vitale.

As you know, Vitale may or may not have been lobbying friend, and House Speaker, Sal DiMasi. Galvin wanted to get some answers from Vitale about what exactly he was doing making $60,000 from a group of ticket brokers if he wasn’t working for them, and why he would also be procuring below market rate loans for the Speaker if he was. Last week, Vitale refused to talk to Galvin.

Now, Galvin wants to have the ability to get answers from uncooperative lobbyists.

“The current law is supposed to provide for full disclosure,” Galvin said. “But if people choose to ignore the law to avoid detection, or are not completely thorough and truthful, I don’t have the tools to compel their total disclosure. That shouldn’t be the case.”

“They’re thumbing their nose not only at me, but the whole process of public disclosure and the citizens of Massachusetts,” said Galvin. “This is a test case. And if it works, it won’t be the last one.”

Vitale might have trouble getting his calls returned for a while. Nobody wants to hang out with the guy who woke the sleeping giant.