Yesterday, we begged Bostonians to keep it together if the Celtics managed to win the championship. On the whole, things went much more smoothly than some other playoff victories in recent memory. The Boston Police blog reported that there were 14 arrests related to celebrations last night, but local media now says the total is up to 30, mostly for disorderly conduct. 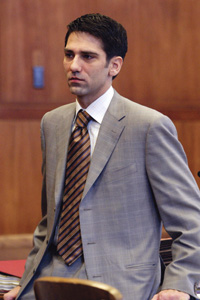 Apparently, Gary Zerloa didn’t take our advice. Just days after he was cleared on his third sexual assault charge, he was arrested for allegedly punching a cop after last night’s win. [via Universal Hub]

What is wrong with this guy? (Hey, we have some theories.)

According to police, Sgt. David O’Connor watched Zerola, of Boston, unbutton his pants then turn toward the corner of a building near Faneuil Hall about 1:45 a.m.

O’Connor asked Zerola what was doing and ordered him to stop, then tried to grab his hand as Zerola walked away, according a police report. Zerola allegedly struck O’Connor on the shoulder and fled before being tackled by O’Connor and other officers a few blocks away.

Can People magazine take a cue from UMass’ relationship with Robert Mugabe and revoke the title of Most Eligible Bachelor? As a single woman, I can say with confidence I’d rather spend the rest of my days as a shut-in with cats than hook up with this guy.

Related
The Case Against Cassanova