Video Tribute for the Lion

The last time we checked, Ted Kennedy is still with the living. But that hasn’t stopped the DNC from creating a 15-minute long tribute video that will air at the Democratic National Convention later this month. 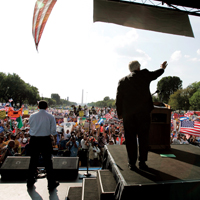 So for those of you keeping score at home, the convention will have both an Orrin Hatch-penned ode to the senator and a tribute video package for the Liberal Lion.

We assume the party is still commissioning the sculptor for the life-sized statue of the senior senator.

The Herald’s sources play coy, saying that the video probably indicates that Kennedy will spend the end of August at home, preparing to return to the senate in September. But in the same breath, they also indicate that the urge to be involved may trump any worries about his weakened immune system.

“The bulk of his treatment is completed, but he still gets chemo once a week. His immune system is still repressed, so right now his staff believes he won’t go,” said the source. “You never know with him, though. He might get up one day and decide he has to be there.”

He’s done it before for a less auspicious occasion. We’re still predicting that he shows up midway through the tribute video to give a rousing oration.

Related
Hear How He Roars