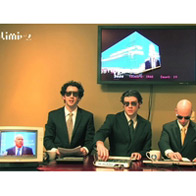 We’re upset that John McCain has suspended his campaign to go to Washington and help handle the financial crisis. (Though not as livid as David Letterman. Let that be a lesson to any future candidates—do not cancel your Letterman appearance on short notice and talk to Katie Couric instead.)

If McCain keeps up this charade emergency measure, tomorrow night’s debate at the University of Mississippi won’t happen, which puts our Friday night partying plans in limbo. We’re not the only ones.

Tomorrow night, the ICA hosts reConstitution. Performance artists Sosolimited will remix the candidates’ words and images into a “nonpartisan spectacle of light and sound,” which will probably be more meaningful than the platitudes McCain and Barack Obama will be spewing.

Thankfully, the ICA’s PR person tells us the museum has a plan B. “Sosolimited will perform at the ICA this Friday no matter what. In the case that the debate does get canceled on Friday night, they will re-mix footage from the Democratic and Republican conventions using the same software and in the same manner that they would have done with the debate,” says Joyce Linehan.

Lest we appear in the tank for the ICA, we’d also like to report that OM in Harvard Square will screen the debate on lounge’s flat-screen TVs, and will serve half-price appetizers to hungry political junkies. We haven’t gotten word yet on what will happen if tomorrow’s debate doesn’t happen [UPDATE: The people at OM say half-price apps are on for tomorrow whether McCain shows up or not] but the restaurant will offer the half-priced apps for the three remaining debates. Provided McCain has finished rescuing the American economy and decides to show up, of course.