Mad Fan With a Cause Seeks $400 Billion 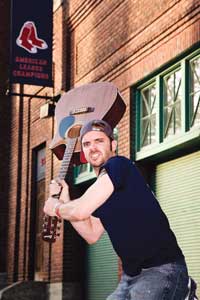 In the June 2008 issue of Boston magazine, we told you about Bart Steele, the Chelsea musician who believes Jersey rockers Bon Jovi stole his song “Man, I Really Love This Team” and released it as “I Love This Town,” which was used in TV spots for baseball’s playoffs.

Today’s Herald reports that Steele is suing Bon Jovi for $400 billion. Yes, that’s billion. With a “B.” Surely that must a typo.

“Actually, they owe me more than that,” Steele tells Boston Daily.

In the lawsuit (which you can read on Steele’s MySpace page) he asks for $100,000 per Bon Jovi CD sold. Sales of Lost Highway, which includes “I Love This Town,” currently total about 4 million units. “This total does not include even digital sales royalties, or a portion of concert profits,” Steele’s lawsuit states.

“This is real. This happened,” Steele says. “This is corporate America’s biggest fuck-up. I’m going to change the laws to favor the artists.”

Steele maintains he’s not suing Bon Jovi to earn a quick buck. In the lawsuit, Steele says he’ll donate 99 percent of any settlement to musician’s rights organizations to help other small artists who find themselves in a similar predicament.

“[Bon Jovi] is part of the corporate America machine,” Steele insists. “He doesn’t do it for the art anymore, he does it for the money. Think about how sucky our art would be if everyone did everything for the money.”

Related
The Ballad of a Mad Fan