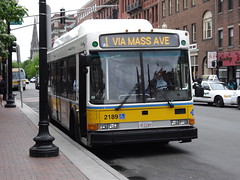 When the MBTA made the decision to release its real-time GPS data to web developers last year, they didn’t suspect that it would catch on so quickly. But according to their recent research, over a third of bus riders in Boston are now using one of the 30 apps that have been created with the open source info. Joshua Robin, the director of innovation and special projects at the MBTA, told NPR’s Transportation Nation that they saw a spike in downloads at the height of the snowy weather. I asked him for more details:

“The applications have been received well by customers who have been spared the pain of looking over the curb and wondering when the bus will arrive. While we do not require app developers to report download and use statistics, and information survey shows more than 100,000 downloads of various apps meaning that they are reaching customers! At the height of this winter’s storms we saw tremendous usage of apps and the feed meaning less time in the cold weather.”

What I’m waiting for though, are the numbers for how many app-related incidents have occurred on public transportation since the GPS data was released. (Imagine the irony of being distracted by your app only to be hit by the very bus that you were tracking!) Strangely enough, there’s been a small uptick in bus accidents since the fall. But so far, Robin has been mum on any connection between the two.

In all seriousness though, I’ve definitely become dependent on my bus-tracking app and applaud the MBTA for their forward-thinking efforts. As for Robin, he says he’s been heartened by the innovations he’s seeing come from developers, like the NexTime app, by NextTransi, for example, which he says “gives riders a reminder when it is time for them to run and catch the bus.” Robin says that the feed of data for the Orange, Red, and Blue lines are currently in the pilot stage, and that the MBTA plans to release the Commuter Rail information in the coming weeks.

Have a favorite MBTA app? Let me know in the comments.