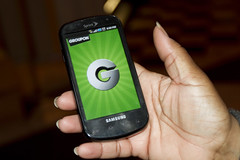 Is that Groupon burning a hole in your pocket? Cost-conscious consumers with short attention spans can take advantage of Groupon Now! which expanded to Boston and several other major cities on Wednesday. The Now! deals are short-term sales that are good for one day only, and are the latest attempt by deal sites to move into the mobile space. Groupon is pitching it as a way for merchants to bring in business on a slow day, in order to “attract extra customers in the hours they need them most, managing the flow of business in real time.”

So what’s the deal with the Now! deals for users? Groupon’s goal seems to be to fill your idle time with new ways to buy stuff. The Now! site asks what you want to do and offers eight categories for consumption: Eat Something, Have Fun, Go Shopping, Go Out, Exercise, Get Pampered, Take a Class, and Take Care of My Pet. (One wonders if they need a category called Get Stuff Done, as right now, this shoe repair deal, complete with a blurry photo of a broken loafer, falls under the “Have Fun” category. And anyone can tell you that having broken loafers is anything but fun.)

But poking around on the Groupon website for Now! deals isn’t the point, they’re meant to be used on your phone through Groupon’s mobile app, which uses GPS to tell you the best deals nearby. Have you used a Now! deal yet? Let me know what you think.