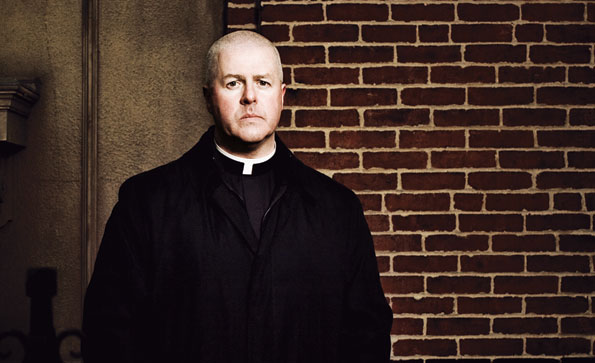 Father Paul O’Brien, the pastor at Lawrence’s St. Patrick’s church, is willing to rail against corruption, but hopes his is not a lonely voice in the wilderness.

Normally a celebratory event, this year’s inauguration of Lawrence city council and school committee members is somber, almost funereal. Father Paul O’Brien, the pastor at St. Patrick’s church in South Lawrence, takes to the podium at Lawrence High to deliver a prayer. “We live in a community that’s not safe. We all know that,”he says. A tall, imposing figure in his black clerical garb, O’Brien swivels his head to the right, looking at the elected officials seated nearby — a group that includes Mayor William Lantigua. “Let us pray for those who serve in public safety. And for our elected officials, that they understand better that they must step away from corruption.”

Times are hard in the state’s poorest city. The mayor is under federal and state investigation for campaign-finance improprieties and other questionable behavior, while a state-appointed overseer is managing the city’s municipal budget. Lawrence’s public school system is in receivership — the former superintendent, Wilfredo Laboy, is under criminal indictment for fraud and embezzlement, and the high school dropout rate is more than 50 percent. Public-safety cuts have been drastic, and felony crimes have skyrocketed from 1,777 in 2009 to 2,597 during the first 11 months of 2011. Unemployment is as high as 18 percent, compared with the state average of less than 7 percent. With 76,000 people squeezed into 6.93 square miles, violent crime on the rise, and a public school system that’s the worst in the state, the once-proud “Immigrant City” has become an object lesson in how to screw things up.

Father O’Brien turns back to the audience. “Let us pray to be people who stand for the truth,” he says, “who are not intimidated by corruption.”

Afterward, I mention to O’Brien that his prayer sounded like something uttered by Karl Malden, who played a crusading priest in the 1954 film On the Waterfront. “In a place like Lawrence,” he replies, buttoning himself into a black topcoat on the front steps of the high school, “you’re either on the side of darkness or light.”

In 1845, Abbott Lawrence and his brother Amos raised a million dollars and created a holding company, the Boston Associates, which purchased seven square miles of land on either side of the Merrimack River. Abbott Lawrence then hired an engineer named Charles S. Storrow, from whose drafting table arose a planned industrial city that would produce textiles for the world. Just the Ayer Mill alone was equipped with 400 broadlooms, 44,732 spindles, and nine giant steam boilers rated at 600 horsepower each. The equipment was operated by workers of Italian, Polish, Lithuanian, Syrian, Irish, English, German, French-Canadian, and Portuguese origin.

Immigrants from Puerto Rico and the Dominican Republic began arriving by the middle of the 20th century, just as the textile industry was migrating south in search of cheaper labor. The city has had difficulty replacing the lost jobs, and for the past four decades, most people in Lawrence, an estimated 74 percent of whom are Latino, have struggled to get by. Lawrence saw its median household income fall more than 20 percent between 1979 and 2010 to $31,631, the lowest in the state. (In comparison, Holyoke’s median household income is $31,948, Springfield’s is $34,628, and Chelsea’s is $40,487.) Over the past five years, Lawrence’s median single-family home assessment value dropped 18 percent to $221,800, second only to Peabody’s 20.3 percent loss during the same period. And last year, in its scathing district review, the Massachusetts Department of Education noted that 23.8 percent of the 12,800 students in Lawrence public schools were less than proficient in English.

New hope arose in January 2010 with the inauguration of  William Lantigua, the first Dominican-born mayor in Massachusetts’ history. Many in Lawrence believed they had found their champion.

On the night of the election, which Lantigua won with 54 percent of the vote, Luis Medina, a campaign volunteer who was born in the Dominican Republic and grew up in Lawrence, was among the throng of Lantigua supporters at his headquarters on Essex Street. When word spread that Lantigua had won, “it was a joyful moment,” says Medina, 44, a union electrician who works in Boston. “Some were crying. The rest were jumping up and down.”

But the honeymoon was short. Lantigua immediately generated controversy by trying to keep his job as a state representative while serving as mayor. He also feuded with the fire and police departments, the disagreements becoming acrimonious and personal and culminating in a claim that police officers had actually tried to run him down in an unmarked car. Two years into his first term as mayor, Lantigua has been the subject of four voter recall attempts, and is the target of a federal probe into campaign-finance improprieties.