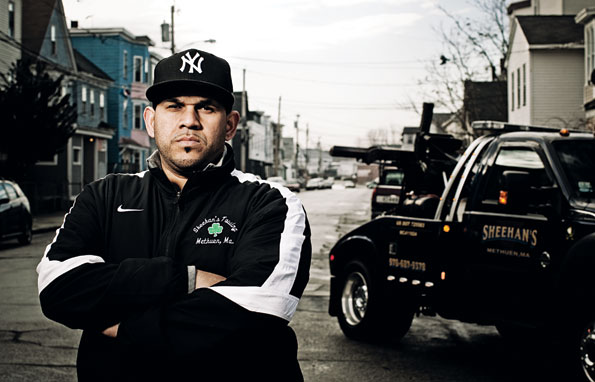 On a bitterly cold day, we’re in an SUV on our way to buy heroin. The driver is a burly fellow in an old ski vest who doesn’t say much. In the back seat is a fortysomething middleweight with a pugilist’s flattened nose.

The two men resemble the small-time dope dealers they purport to be, but in reality they’re members of a drug task force operating in Lawrence and surrounding communities. (Their identities are not being revealed because of the risk to their effectiveness and safety.) Street dealing and its attendant violence are worse than ever in Lawrence, but the task-force agents stay focused on the big picture — the major players in the area, and the out-of-town heavies bringing the stuff in.

The undercover cops are on their way to make a “controlled buy” from a house that’s been identified as a major source of heroin. Crossing the bridge, we turn left and run alongside a park near South Union Street, empty but for a man walking his dog. A squat man in his forties appears — the informant who will make the buy.

The informant climbs into the SUV and one of the task-force agents searches him, joking when his hand rests on the man’s phone.

“Yeah, but I got a permit,” says the informant. Everyone laughs.

“Let’s buy small,” an agent says. “I want to have it tested, see where it’s coming from. See who’s shipping.”

Minutes later, the informant gets out of the SUV and walks to the house. A tall man in a hoodie greets him in the driveway and leads him inside.

Five minutes crawl by. The longer it goes, the better the chance something bad is happening. Suddenly the door to the house swings open, and the informant jumps down from the porch and walks away, head down, hands in his pocket. Back in the car, he’s holding a baggie with a gram of heroin. It’s the size of a pencil eraser.

“That’s a nice piece, bro,” says the agent in the back seat. “He cut that off a finger?” The informant shakes his head. “He don’t fuck around with fingers. Just fuckin’ bricks.”

Over the next half hour, the task-force agents point out a dozen more such targets, houses across the city where high-volume drug dealing is being done.

“We could do this all day, every day” in Lawrence, says the driver. “A house a day.”

But they aren’t able to. Lawrence’s budget crunch has all but gutted the city’s law enforcement. In fiscal year 2011, Lantigua cut the police department from 151 officers to 110. (Staffing levels have subsequently risen to 118 officers through grant funding, according to police chief John Romero.) After the reductions, felony crimes — including murder, rape, robbery, aggravated assault, burglary, arson, larceny, and auto theft — rose 23 percent from the previous year, Romero says.

The Lawrence Police Department’s “special operations” units have been especially hard hit by the cuts. The street narcotics unit, consisting of seven experienced plainclothes officers, was shut down by Lantigua (who declined to comment for this story) on July 1, 2010, along with five other special units that focused on gangs, burglaries, auto theft and insurance fraud, domestic violence, and community policing.

From July 1 to December 31, 2009, when the special ops units were fully staffed with a total of 35 cops, there were 990 felonies committed in Lawrence. During the same period a year later, after the cuts, that number rose to 1,410.

“Drugs fuel most of the crime in the city,” says Romero, who was a New York City cop for 30 years before becoming Lawrence’s chief in 1999. He says that, on the one hand, he can understand the staff cuts. “I get it — there was no money. But I told the [city] council, you need to understand what’s going to happen.”

One of the task-force agents from the drug buy says the cuts have been devastating. “We’ve had 24 murders in the last 30 months,” he says. “I’d say 80 percent of those are drug-related. Taking away special operations has set the city back 15 or 20 years.”

Orlando Rosario drives a tow truck through the streets of Lawrence. A stout Latino Falstaff with a permanent 5 o’clock shadow, Rosario has been working for Sheehan’s Towing for more than a decade and knows every shopkeeper, cop, and crackhead in the city. Driving along, he points to where an expensive SUV has been left running at the curb — an incongruous sight in this neighborhood filled with junk cars and taxis.

As we cruise by, an attractive fortyish blonde walks briskly outside and slams herself into the driver’s seat. She has something in her hand and stares down lovingly at it. In the passenger seat is a young boy who’d been left alone in the car.

Rosario points out one drug house after another. Passing a fast-food restaurant at the intersection of Essex Street and Broadway, he says, “Here’s where all the crackheads and prostitutes go in the morning. You’ll see ’em here every day between 7 and 9. It’s like their office.”

Broadway is thick with traffic between Essex and Lowell streets. A short while later, a guy pulls up alongside, calling out in Spanish to Rosario.

Born in the Dominican Republic, William Lantigua moved to the U.S. in 1974 at the age of 19, settling in Lawrence. He worked as a technician at Schneider Electric in North Andover for 23 years while doubling as a community organizer and volunteer campaign strategist in local elections. In 2002, he was elected to the Massachusetts House of Representatives from Lawrence’s 16th Essex District. He was reelected four times before announcing his candidacy for mayor of Lawrence in 2008.