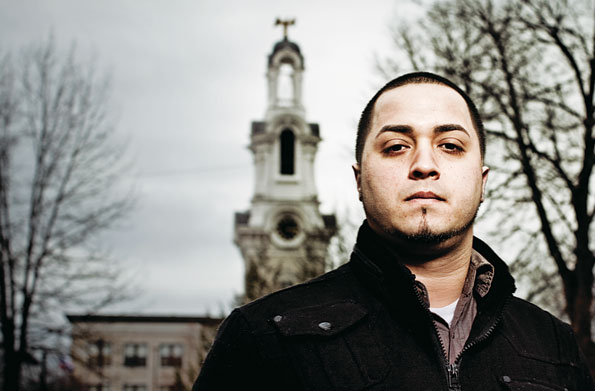 Josue Hernandez is leading a recall effort against the mayor.

Lantigua’s victory brought new hope to the overwhelmingly Latino population of the city: Here was a guy, like many of them, who had come to Lawrence from the Dominican Republic looking for an opportunity. A tall, slender man with a shaved head, Lantigua, now 57, possesses a kind of endearing clumsiness in front of a crowd. But his mien can quickly turn cold, and he’s often surrounded by a dozen or more grim-faced men wearing baggy suits that look like they came from the Russian politburo’s thrift shop.

Unfortunately for the city, Lantigua’s political persona changed as quickly as his moods. First, there was his refusal to give up his position as state rep, claiming he could do both jobs simultaneously — and collect both salaries. (Finally, in February 2010, his colleagues in the House forced him out by saying they’d deny Lawrence $35 million in bailout money unless he quit.) Then, last May, it became known that Lantigua and his live-in girlfriend, Lorenza Ortega — who works in the city’s personnel office — were accepting federal fuel assistance to pay the heating bills for their condominium. Since the mayor is paid more than $100,000 a year, he and Ortega were clearly ineligible for the approximately $1,165 annual fuel subsidy that’s meant for struggling families. Lantigua bristled when questioned by reporters, claiming he didn’t know he was receiving fuel assistance and that he was preoccupied with city business.

Meanwhile, the mayor has prevented his department heads, including the police and fire chiefs, from releasing information or talking to the press without his permission. That gag order is just one source of Lantigua’s strained relations with his public safety departments. He has stated that firefighters get paid to sleep, and that Lawrence police are “intimidating” and “lazy.” Certainly, the current administration inherited severe budget problems from the previous mayor, Michael Sullivan. But Lantigua’s dismissiveness hasn’t helped him win points with the fire or police departments.

Lantigua’s ham-fisted patronage system is also drawing heat. One personnel change in the police department has fueled an ongoing circus of accusations and finger pointing, not to mention suspicions of a secret federal investigation. Right after his inauguration in January 2010, Lantigua demoted deputy police chief Mike Driscoll, a 20-year veteran of the department, and replaced him with sergeant Melix Bonilla, who’d been a top Lantigua campaign aide.

It wasn’t long before Bonilla was caught up in controversy of his own. Approximately a year after Bonilla’s appointment, his 17-year-old son, Jamel Bonilla, allegedly used his father’s gun in a home invasion. (According to the Eagle-Tribune newspaper, Melix admitted as much as part of a deal that gave him immunity from prosecution; Jamel was indicted and pleaded not guilty.) Then, in April 2010, Bonilla sent police chief John Romero a memo suggesting the department trade several seized vehicles to a local car dealer, Bernardo Pena, who had ties to Lantigua. In the end, the police department gave up 13 vehicles, including a Lexus, a Cadillac, and an Acura, for four used Chevrolet Impalas.

Lawrence’s state-appointed fiscal overseer, Robert Nunes, estimated that the city lost $36,408 on the deal, and stated that the swap violated state and federal laws. (According to the Eagle-Tribune, the Essex County district attorney’s office and the state inspector general are still investigating the deal, and the FBI has also questioned people involved in it.)