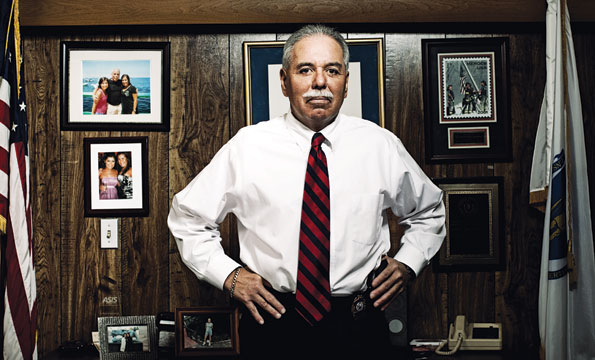 Known for feuding with the mayor, police chief John Romero has had his forces cut drastically in the past two years.

Subsequent revelations raised questions about Pena’s relationship with Lantigua. As the controversial car deal was under way, Pena donated $200 to Lantigua’s campaign war chest, and in February of last year, Pena’s company, Santo Domingo Motors, cosponsored a birthday party/fundraiser for the mayor, with tickets costing as much as $100.

Lantigua is also under federal investigation, according to several press reports, for shipping city and private vehicles to the Dominican Republic, including a garbage truck, undercover police vehicles, and a school bus.

Lantigua’s many issues have led not just to discontent, but also to a determined recall effort. Standing at the corner of South Broadway and Andover Street, several volunteers, all Latino, are holding signs in English and Spanish, asking passersby to sign a petition calling for Lantigua’s removal from office. Twenty-four-year-old Josue Hernandez stoops into a car window, using an app on his cell phone to determine whether the person who wants to sign the petition is a registered Lawrence voter. Last summer, a different recall effort failed when the city ruled that many of the signatures collected did not belong to registered voters. Recall organizers suspected sabotage. Now, Hernandez and his colleagues must gather the signatures of 5,382 registered Lawrence voters — 15 percent of the number who cast ballots in the last election — to force a special election. They have 30 days to do so, and in the first three days have collected more than 500 of them.

Hernandez’s public criticism of the mayor may have had repercussions — his juvenile record, including arrests for armed robbery, assault, and more, was posted on a pro-Lantigua Facebook page, the information coming from pages originally printed from a police department computer. (Chief Romero immediately opened an investigation, which is ongoing, into who did it.) Standing on the corner, Hernandez shows me a YouTube video on his phone of Lantigua confronting residents at a Walk for Peace last July. In the video, residents are trying to engage Lantigua as he repeatedly and angrily points at the ground in front of him — implying that his critics can kiss his feet. Finally, a political ally standing beside Lantigua takes him by the arm and convinces him to stop. “It’s a peace march,” Hernandez says, “and here he is acting like a thug.”

Nearly 13,00 children attend Lawrence’s troubled public schools. The past three superintendents were fired, including the most recent, Wilfredo Laboy, who’s currently under criminal indictment and awaiting trial. Last fall, the state declared Lawrence a “chronically underperforming” system, and for the first time in Massachusetts history took over an entire district, essentially saying the city isn’t competent to run its own schools.

The Department of Education completed its review of the district last fall. Among the reasons it cited for the takeover are a dropout rate that’s three times the state average; a high school graduation rate of less than 50 percent; a pattern of “disrespectful and intimidating behavior” exhibited by school committee members; systemwide underperformance in math; an English language aptitude that’s among the bottom one percent of all Massachusetts districts; chronic absenteeism; and a rate of in-school disciplinary suspensions more than triple the state average. And in a city where the student body is 90 percent Hispanic or Latino, the schools have been deemed woefully understaffed with teachers qualified to teach English-language learners.

Inside the schools, the problems are difficult to overstate. One day last fall, a middle school teacher found students huddled in the back of the classroom, according to attorney Linda Harvey, who represents the teacher. “He’s got a knife,” said a student, pointing at a boy holding a four-inch blade. The teacher ran to the classroom door and yelled for a security officer, who removed the boy. The teacher advised the security officer to call the police and an ambulance. Ninety minutes later, the student was sent back to the classroom without the knife, Harvey says.

Neither the police nor an ambulance was summoned, Harvey says, speculating that the incident went unreported “in order for the school to have a lower suspension and police intervention rate.”

Harvey says the teacher later found out there was no incident report, or any punishment. “It’s a feeling of hopelessness regarding the future,” the lawyer says. “These teachers hope the receiver” — Jeffrey Riley, formerly the chief innovation officer for the Boston public schools, who was appointed in mid-January — “talks to them, because they haven’t been heard from in years, and they’re on the front lines.”