Cops Tell Occupy Protesters to Choke on It 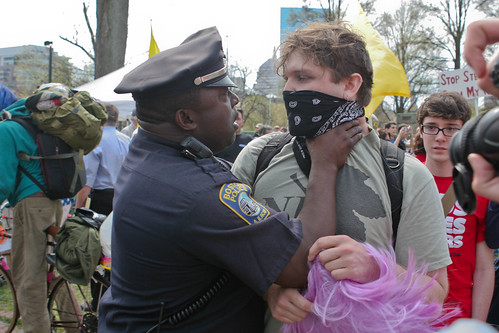 By now you’ve seen this picture, taken a Tea Party/anti-Tea Party rally over the weekend. The looks on the two parties’ faces say it all: authority exerted, authority resisted, and the old push-pull between order and those who would change it (or, you know, chaos). Seeing all this it’s hard not to think: When did the Common start to look like the outside of an abortion clinic in Kansas?

As a Bostonian and a man of media, I read up on it (The Globe for the latest coverage, as always, and the Herald for the insane comments.) And lo, most of the media picked up the shot, while the Herald, the paper of “Occu-Sty” headlines, had nothing. Not so much as a blurb or brief from the anti-protester paper. This can only lead to one of two conclusions: The Herald is in trouble, or the Boston Police Department is.

First, the Herald. Hard as it is to build a reputation around recycled talking points, fawning over politically aligned personalities, and commenter-baiting, the Herald has done it. Nevermind the commenters are like your one-eyed carney uncle who gets too drunk at Thanksgiving and starts lots of sentences with “You know what really pisses me off …” Here’s what’s different this time: The usually predictable and pin-sharp lines of outrage are blurry here. When the Occupy protests at Dewey Square were happening, commenters were in vocal support of a violent police intervention. This seems like the exact response the peanut gallery wanted. And still, whither the Herald?

The Herald decision-makers must be nervous and anxious of their readership, and worried they’ll look guilty by association for giving a forum to the commenters’ hate. Either that, or it plain wasn’t worth the time it would take to actively police the comments for the stuff they knew was coming. But then again, the Herald is not exactly shy about scraping with the BPD. If that’s the case, the Herald thinks it’s worth foregoing coverage to spare the BPD an even more public shaming. That doesn’t bode well for the BPD.

When the Herald is no longer interested in your dirt, vices, mistakes, and misdeeds, it’s like you don’t exist.

Nevermind that picture will likely cost the cop a few days behind a desk, the protester might even file charges, but if police hands on protester throats can’t muster so much as a blog post, then it’s not even shocking enough for the most shock-prone paper in town. Maybe it’s not the Herald, or the BPD who stands to lose in all this. Maybe it’s all of us.