Of Enormous Sodas, Twinkies, and Nannies 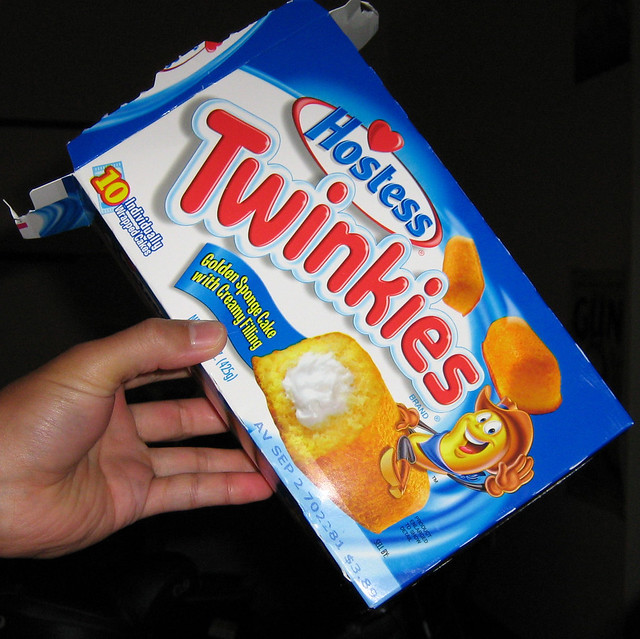 (Twinkies photo by Eleventh Earl of Mar on Flickr)

I almost burn with shame to admit it, but I love Twinkies. Not because they are any good. They aren’t. But because they are associated with a distant memory of happiness from my youth. Opening my grease-spotted brown paper bag in the lunchroom at Claremont Elementary School to find a sandwich and a cellophane-wrapped package of golden Twinkies was to akin finding the mother lode. I suspect Twinkies must be chemically related to crack. Once you are hooked on Twinkies, it’s hard to ever get off — even if you think they’re killing you. So I get it about junk food. I grew up in the Golden Age of it.

I began to seriously think about Twinkies over the past few days because of the Great New York City Food Kerfuffle. Mayor Bloomberg banned the sale of behemoth-sized sugary drinks in New York City and set off a firestorm of controversy. Jon Stewart and Stephen Colbert both did great bits about it. And the New York Times carried a full-page ad attacking Mayor Bloomberg as an uber-Nanny in a liberal nanny state gone wild. The ad was paid for by The Center for Consumer Freedom.

The Center for Consumer Freedom was obviously named by people with a great sense of humor. According to Source Watch, the center is really just a front group for the restaurant, alcohol, tobacco, and other industries. You know, the good guys. The center runs media campaigns that rail against things like sensible eating advice, vegetables, and healthy choices in general. It also does its best to talk up the virtues of the Free Market even as it works hard to keep the American taxpayer on the hook for giant, never-ending subsidies to Agribusiness. We pay them subsidies to produce excessive amounts of the kind of sugary, fatty crap that’s killing us, running up our health care bills, and turning our kids into doughy, diabetic blimps.

Then I saw a Huffington Post piece titled “Why Are Twinkies Cheaper Than Carrots?” I wondered if this was actually true, so I visited the Shaw’s in Newtonville. Sure enough, a package of two Twinkies was $1.59. And a smallish bunch of carrots was $1.79. I don’t believe there’s any way that you could make a package of Twinkies for just $1.59 without some serious subsidies somewhere along the way. Twinkies after all, have 37 ingredients in them. Carrots have just one. That would be: Carrot.

I totally understand Bloomberg’s concerns about ginormous sugary drinks. Just one venti-sized Blended Java Chip Frappuccino from Starbucks has 510 calories. Drink those often, and you are going to get fat. But I sort of have to side with the Center for Consumer Choice on this one.

Because even if you skip the now-forbidden big gulp beverages, and instead make a still-legal lunch out of a Hardee’s Monster Thick Burger at 1,420 calories, and pair it with an order of cheese-covered ranch dressing French fries from Outback Steakhouse at 2,900 calories, and wash it all down with a large Baskin Robbins chocolate Oreo shake at 2,600 calories, you will have consumed enough calories in one meal to keep a cave full of bears alive for about three years. Mayor Bloomberg’s restrictions may be well intended, but they miss the mark.

Instead a regulation that says: “it’s the size that matters,” how about a real effort to end the death dealing subsidies that go to Agri-business conglomerates? A free market is, after all, what those folks at Consumer Watch pretend like they support. So, let’s call them on it.

Through agricultural subsidies and access in schools, we are enabling Agri-Junk to peddle food dope to our kids — and it’s hurting them. Despite the hand-wringing by the opposition, the food police may be annoying, but they aren’t the real problem. You can still buy 2,000 ounces of Pepsi a day if you are dumb enough to do it. It’s not the Nanny State the we need to worry about. It’s the Ninny State.