How Many Dead Cyclists is Enough? 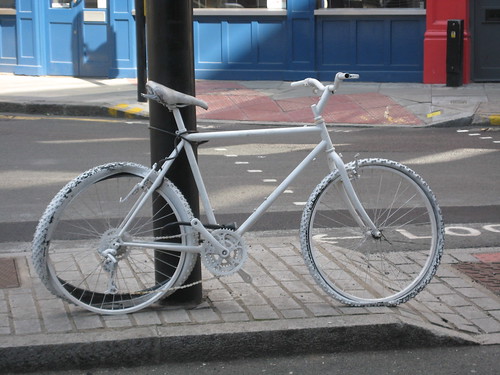 On Friday night, Boston counted the death of another bicyclist. Kelsey Rennebohm, a 28-year-old graduate student at Boston College, was struck and killed at the intersection of Huntington Ave. and Forsyth Street, about a block away from the Museum of Fine Arts.

The details of the accident remain under investigation, though police have questioned an MBTA bus driver thought to be somehow involved in the accident. The deaths of young people have a way of galvanizing action, but not when it comes to cycling. Instead the public reaction is something like, Oh, well, was she wearing a helmet?, or, I bet she was one of those impatient, light-blowing psychos. Maybe someone organizes a vigil, another ghost bike goes up, nice things are said, but then within a couple of days, everyone forgets. Blame transfers back to the dead with the callous, cold observation that, well, Boston is a bad city for biking.

That’s why it’s so surprising to realize that almost the same thing happened in the same spot five years ago when Gordon Riker, a 22-year-old student at MassArt, was struck by a taxi and knocked under the wheels of a dump truck. Same exact intersection, Huntington and Forsyth.

Back then, that was just another bicycling tragedy, but at some point, politicians and transportation planners are going to have to realize that the can no longer allow young people to be run down without consequence. As it stands, cyclists and pedestrians account for 19 percent of road fatalities (though they only take 12 percent of trips) and the state’s pedestrian and cyclist fatality rate is 14 percent higher than the national average, according to cyclist advocate MassBike.

Yet even last week, the Joint Committee on Transportation of the state legislature voted to “study” (translation: do nothing) to a bill called the Vulnerable Road Users Act, which would provide cops with additional tools to enforce motorist-on-pedestrian/cyclist crime, and put in place safety classes for drivers involved in accidents with vulnerable road users. The bill was modest in scope, yet it failed to gain sufficient support.

Why does it always take a death — or in this case, two — before anything gets done? When will people start demanding more accountability from drivers and safer cycling lanes, and give police more power to keep people engaging in a lawful activity from getting mowed down? I’m hoping it’s no more, but if it does take more, the blood of these cyclists will certainly be on the hands of those who could act, but chose not to.