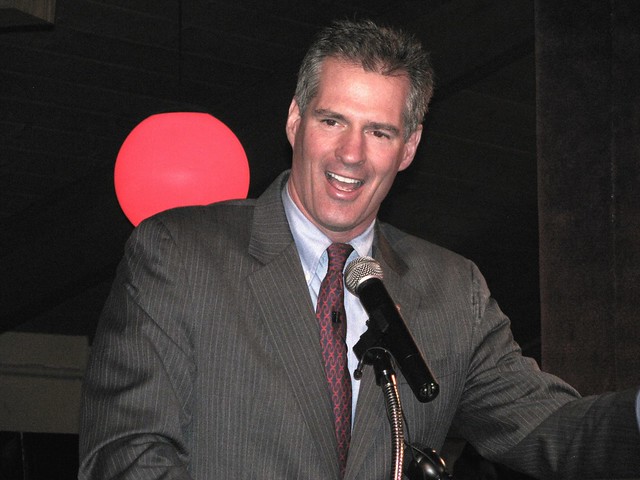 Will Sen. Scott Brown cancel his support for oil-industry subsidies? A lot of voters want to know. And I mean a lot.

Yesterday, as part of a national effort by environmental group 350.org, climatecentral.org, and the Sierra Club, voters hammered Brown’s Facebook page with hundreds and hundreds of posts quizzing the senator on his support for fossil fuel subsidies and challenging him to give up his support for a “dinosaur” industry, which has given his campaign $227,000, according to recent filings.

As always with semi-public discourse, the comments ranged from cut-and-paste jobs to more vehement exhortations. Check it, from Facebook user Andrea Doremus Cuetara:

Dear Scott Brown – You are being presented as a politician who supports BIG MONEY and BIG OIL, which is very upsetting since you are meant to represent ME in the Senate and so much harm to our country has been done by these interests (and of course, one could argue, some good as well – but SO imbalanced).

Can you make a clear statement RE: “What is your position on ending subsidies for all fossil fuels?”

The stated goal of the campaign is to leverage the little guys (voters, that is) and candidates’ obsession with looking good on social media to pose a question. This basically amounts to the anti-Citizens United where individuals can pay nothing yet make a big impact. And really, everyone’s talking about dark money politics and off-the-chain political action committees, but you hear curiously little about (and from) actual voters these days.

Of course, all the effort seems to be for nothing — at least in Brown’s case. His Facebook page didn’t acknowledge a single comment, let alone issue any kind of indication that he might reverse his policy position on fossil fuel subsidies. Nada. The effort targeted every member of Congress, but Brown seemed especially targeted given his coziness with the fossil fuel industry (he’s on the record as supporting subsidies), and his support for the Keystone XL pipeline, a transnational pipeline that would transport tar sands from Alberta, Canada, to a processing facility in Texas. This has become the issue de rigeur for environmental voters, but a controversial one in an election year. Even Obama is being very dodgy about his support for the project.

Yet without an acknowledgement by Brown, the Facebook wall-bombing is a good test of a new kind of organization, one that’s being held forth by an emerging demographic of staunch environmental voters. Commitments of time and money are very low in this type of advocacy, which makes it a good fit for this day and age, but so far, the results are low, too.